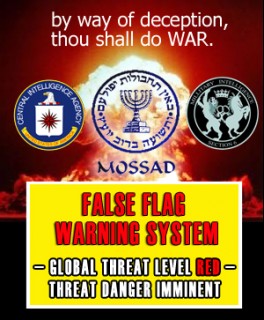 When a number is invested with spooky significance, we’re in Cabala territory.

That’s what happened with 9/11. The three digits 9-1-1, the number Americans use to call their government in case of emergency, became the icon of a “whole new world” based on the foundational myth of the New Pearl Harbor – the event that “changed everything.” Those who staged the 9/11 attacks chose the date for that reason.

Today, every time we hear “9-1-1” we think of two things at once: The terrible destruction of the World Trade Center, and the “in case of emergency” phone number. The subliminal message: We’re in a state of emergency, and only the government can save us…through pre-emptive wars, torture, drone killings, NSA spying, no more rule of law, Haliburton detention camps, the works. That permanent state of emergency is the “whole new world” Philip Zelikow, the self-professed expert on “the creation and maintenance of public myths,” designed for us when he and unknown others wrote the script for the events of 9/11.

Those 9/11 scriptwriters were cabalists obsessed with the arcane significance of numbers. For example, they made sure there were exactly 911 days between 9/11 and 3/11 (the Madrid bombings).

Today in Israel, it looks like the same cabalists are at it again. My VT colleague Roy Tov, a former Israeli military-intelligence insider, has blown the whistle on them in his new article 3 Boys for the West Bank.

Even before Tov’s revelations, we knew the Israeli teen kidnapping was an obvious false flag. The chief of Mossad, Tamir Pardo, actually called the event a week before it happened, predicting at a cabinet meeting that “three teens will be kidnapped.”

Israeli investigative journalist Barry Chamish writes: “There is absolutely no doubt in my mind that the police were told to hold back to provide enough time for the get away. Just as much, the phony war farce going on is choreographed as well.”

Tov agrees that the official story of the kidnapping is riddled with holes. The criminals’ car had Jewish license plates, the killers spoke Hebrew, and the police had no valid excuse for writing off the emergency call from one of the victims as a prank and then doing nothing for five hours.

Most intriguing of all, Tov writes: “The event contains the mark of a PSYWAR operation. It created a powerful symbol that will not allow the victims to forget.”

What symbol would that be? The number 18. The boys’ bodies were found on the 18th day of the search, and the media had been frantically counting days. So now the number 18 has been elevated to iconic status in Israel, just like 911 in America.

“In Jewish culture, the number 18 is a symbol of life. The necklaces reading ‘chai’ mean ‘live’ and ’18.’ Jewish men and women do not marry, they make a commercial contract. They sign a ‘ktuva’ (‘written’), a written agreement in which the husband promises to pay a given sum if he divorces his wife. Multiples of 18 are a popular sum in a ktuva due to their symbolizing life. The number 18 can be seen on Israeli streets more than 911 in New York.

“18 Days took the IDF to find the bodies buried less than ten minutes away from where they had been kidnapped, while the alleged perpetrators were in custody. From now on, Israelis seeing the number 18 will see death instead of life. As subtly instructed by their government, they will blame Palestinians.”

Tov is right. But there is a deeper level of symbolism and cabalistic manipulation beneath the surface he describes.

In ritual human sacrifice – a very common practice in pre-montheistic cultures – the victims must be innocent. Such sacred lynching of innocent victims is associated with scapegoating. In this case, Palestinians will be scapegoated for the false-flag murder of the teens, and a massive human sacrifice of innocent Palestinian victims will follow – in the same way that the ritual sacrifice of 3,000 innocent Americans on 9/11 triggered the murder of millions of Muslims.

The cabalistic use of the number 18, “life,” for the death of the Israeli teens gives that number a new life-death polarity. It no longer will just mean “life.” It will also signify death – the murder of three innocent young victims.

The new “18” with its life-death polarity will have an iconic meaning for Israelis: “For us, the number 18 means life, for we are a life-loving people. But the Arabs and Muslims around us are people of death. They killed our adorable teenagers on the 18th day. So from now on, ’18’ means life to us but death for them. The only thing that can enable our life is their death. We must kill them all.”

Whoever created and staged the Israeli teen kidnapping false flag had it all worked out in advance. They set it up so the bodies would be discovered on the 18th day, for the same reason that 9/11 was staged on September 11th. They knew exactly what they were doing.

The “18” operation has triggered an escalation of the ethnic cleansing of the West Bank. That was obviously its purpose all along.

When will the world wake up to these tricks and put an end to the cabalistic psychopathy?