Home Life A Window into the Palestinian/Israeli Tragedy 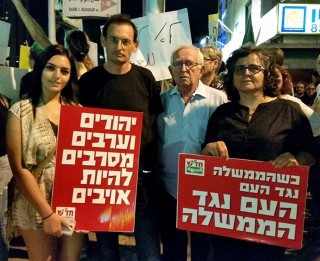 Dr. Dov Khenin is a current member of the Israeli Parliament (Knesset).  In 2008, he ran for mayor of Tel Aviv and received one-third of the vote.  He has been active in the peace and environmental movements and in promoting Jewish/Arab partnerships, human rights, and the rights of working people.

For those who can read Hebrew, his website (which I’ve just stumbled across) provides a window into the tragic state of Israeli/Palestinian society and politics.  Here is a partial translation of a few recent posts, along with accompanying photos.

In the original post, the caption below the photo reads:  “Precisely at this difficult moment, Jews and Arabs stand together in Haifa, refusing to be enemies.” 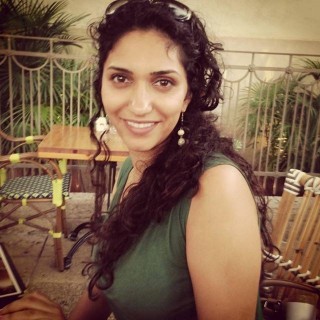 The next post starts with an Edmund Burke’s quote: “All that is necessary for the triumph of evil is that good men do nothing.” Khenin goes on to say:  “Think about this quote when reading what Najmi Ali, a doctoral student [pictured below)], wrote to me:”

“I was on the train on July 1, 2014.  I sat quietly.  I heard shouts and the train was detained.  A crowd knocked on the train’s windows, shouting “death to Arabs.”  I was scared.  I hid behind my sunglasses.  I prayed that they would not recognize my nationality.

A woman was crying hysterically from the back benches of the bus.  I ran towards her .  .  .  She was a Palestinian mother with a head cover.  She was holding the hand of her five-year-old son.  Another woman pushed her, intending to forcibly evict her from the train.  Many people were knocking on the windows.  They were thirsty for blood and that Israeli woman wanted to sacrifice the young mother.

She yelled at me:  “That young mother has no place among us; they murdered three of our sons.”  I shouted back: “Did this young mother murder your sons?  Did her toddler murder them?”  She went on screaming, and the multitude kept knocking on the windows.

A scary sight.  What scared me most was the thunderous silence of the dozens of passengers, as if nothing was happening!  These were the longest 12 minutes of my life–twelve minutes on the road to getting lynched.” 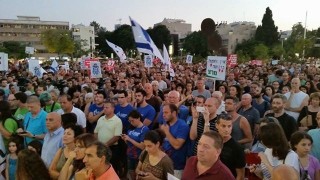 “In a demonstration of thousands on the evening of July 3, I said:  We can break the circle of death, together, Jews and Arabs.  We can build here another future, a future of life and justice for the two people.  We can build a place for all of us.”

June 29, 2014:  “We should never get accustomed or reconcile ourselves to this fact:  While the enormous debts of Israeli tycoons are narrowing, our debts are growing ever larger.  When are we going to reverse this trend?”

June 26, 2014: “How long will it take for a young woman from Kera [an Arabic village] to reach her place of employment, a ten-minute car ride away?  Two hours.  Why?  To reach the nearest bus station she will have to walk 30 minutes and then wait under the boiling sun sixty minutes, on a good day.”

June 25, 2014:  “We did not need the data published yesterday by the Central Bureau of Statistics to realize the severity of the poverty situation in Israel.  But for Netanyahu and the Treasury Ministry, who did not yet wake up, here are the facts:” 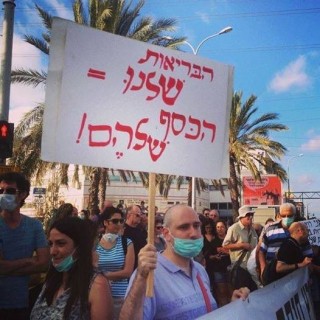 “We must stop this decline.  When 60% of the poor of Israel are actually employed, we must, above all, raise the minimum wage.”

“Why did they arrest tonight people who protested against air pollution in Haifa?  Why don’t they ever arrest those who cause air pollution?” The sign reads: Our health=their money!