That was my original headline for last September’s exposé of Mossad sleeper agent Abdel Fattah al-Sisi, who now rules over Israeli-occupied Egypt. Al-Sisi has been dubbed “a national hero for all Jews” by the State of Israel.

My article went mega-viral, and helped make the issue of al-Sisi’s hidden Jewish past an ever-escalating scandal in Egypt. The Zionist lobby went bananas. Complaints were lodged to the VT editors…by the usual suspects, needless to say. And believe it or not, somebody at VT removed my tight, explosive headline and replaced it with the horrendously lame simulacrum:

I hope that made the Zionists happy.

So now I’m back with another offensive anti-Sisi headline. 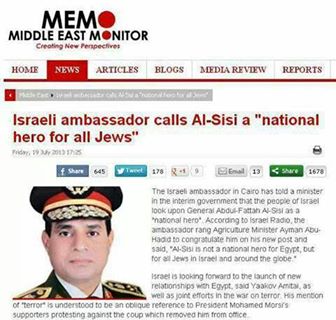 These are the folks who laid the groundwork for the coup d’état against Egypt’s first-ever democratically elected president, Mohamed Morsi, by endlessly comparing him to Hitler. (Which sort of tipped their hand, didn’t it?)

Now Egypt’s Zionist-deep-state media – the al-Sisi propaganda apparatus – is cheering Israel’s genocide in Gaza. An RT-Arabic story has exposed al-Sisi’s pancake-makeup TV whore Hayat El Dardiry, who is being praised to the skies in Israeli media. Why? El Dardiry is begging al-Sisi to “have Egypt help Israel annihilate Hamas.”

An Israeli encomium to El Dardiry quotes El Sisi’s plastic-faced propaganda slut as expressing sympathy for the suffering of the people of Israel during their genocide against Gaza. She also lavished hatred on Hamas for its aid to the Egyptian revolution, including its helping free tortured political prisoners.

El Dardiry’s boss at the pro-al-Sisi Al-Faraeen channel, Tawfiq Okasha, went even farther, proclaiming that Egyptians are ready to send aid to Israel to help it destroy Hamas.

Since lifelong Zionist sleeper agent al-Sisi crucified democracy in Egypt, the border to Gaza has been completely shut down and the smuggling tunnels – which kept Gazans alive – have been destroyed. Al-Sisi and his propaganda brigade are just as guilty of genocide against Palestine as Netanyahu.

Why do the Egyptian people tolerate this tyrant? Where are the brave Egyptians who will rise up and ensure that the democracy-murdering maniac al-Sisi goes the way of his fellow traitor, Anwar Sadat?