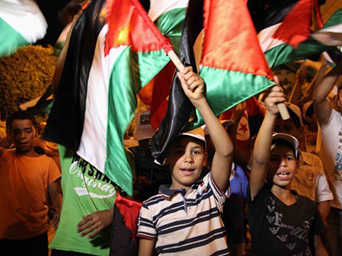 As Gaza and its lovely people were being blown to smithereens by Israel’s state-of-the-art weaponry, paid for by the grotesquely unlovely US administration, I put what I thought was a simple enough question to Dr Hanan Ashrawi on Palestine’s accession to the Rome Statute and the International Criminal Court (ICC) after her remarks in this TV interview http://abcnews.go.com/blogs/politics/2014/07/plos-hanan-ashrawi-deliberate-massacre-in-gaza/.

Ashrawi is an executive member of the Palestine Liberation Organisation (PLO), head of information and culture, and a wonderfully articulate ambassador for the Palestinian cause. From what she was saying, only the decision to accede to the Statute had been made so far, nothing more. So I put the obvious question:

“When will you be able to report that charges have actually been filed against Israel please?”

This was followed by a further question a few days later about a PressTV report  http://www.presstv.ir/detail/2014/07/26/372795/palestinians-file-complaint-against-israel/ that charges had already been filed against Israel at the ICC for recent war crimes in Gaza, through a law firm in Paris. So what was going on? I fired off my next question:

“Where does the story come from and, if true, what sort of timescale is the PLO working to? What other Israeli crimes are to be brought to the Court? Why isn’t the news widely circulated for maximum effect especially at a time like this?”

And I tossed in an extra one which had no chance of being answered:

“What does the PLO say to the suggestion that if moves had been made earlier to involve the ICC the present devastation of Gaza and shocking loss of life would not have happened?”

I had to prod for answers. Eventually a spokesperson told me the PLO “has taken the decision to go to the ICC, but it has commissioned several legal addresses and human rights organizations to prepare the files, lawsuits, etc.”

The PLO has also asked the UN Human Rights Council for a commission of inquiry. “Depending on its findings, which we know will be damning, it has the legal mandate to address the prosecutor of the ICC to file a complaint against Israel.”

As for the PressTV story, this was “an initiative by one person who asked for the endorsement of the minister of justice, but it was not an official case nor has it been endorsed by the PLO.” When the PLO approaches the ICC, said the statement, it will do so “publicly, officially, thoroughly and not by oblique means like this reported case which lacks the basis to be pursued by the ICC”.

So the two senior Palestinian officials in the story – said to be the Palestinian Justice Minister and the Gaza court prosecutor – are really privateers spending big bucks on a French lawyer who doesn’t stand a chance?

The most worrying thing is how laid-back the PLO is in a crisis. It could have gone to the ICC 20 months ago but allowed itself to be dissuaded. You’d think the PLO would at least have used the time preparing the ground and the paperwork so as to move fast if need be, knowing that recourse to the ICC was inevitable. The tea-leaves would have told them that something very nasty was brewing and likely to explode in Gaza. Everyone else was expecting it. A well-timed war crimes charge in the ICC would have taken the wind out of the sails of any further plans by Israel to inflict murder and mayhem.

Then I spotted this item http://www.dailykos.com/story/2014/07/28/1317232/-UN-Protectorate-for-Gaza-and-West-Bank# , which reports how the Palestinian president has asked for the Palestinian territories to be placed under UN protection (see documents http://www.foxnews.com/world/interactive/2014/07/25/letter-from-secretary-general-addressed-to-president-security-council/).

Why wasn’t the world told about Abbas’s request, received by Ban Ki-Moon on 13 July?  Why wasn’t the application broadcast through all mainstream channels? The dates would suggest that Security Council members at any rate knew about it as the savagery in Gaza intensified.

The wording “placed under an international protection system by the United Nations” sounds like a request to make Palestine a UN Protectorate. And isn’t Ban Ki-Moon just a bit dilatory, waiting a week while the onslaught continued and children were shredded in ever-increasing numbers before taking action?

More to the point, did the people of Gaza know about it as they continued to be butchered 24/7?

I put these questions to the PLO’s Negotiations Affairs Department. They confirm that the Abbas letter is authentic and had been sent to local newspapers! They emphasise that the request is not for Palestine to become a UN Protectorate but “simply to be protected as per international law”.

Even so, wouldn’t that normally be a big international news story for a country in the process of being annihilated by the forces of a rogue state?

Eighteen days later, it is clear that the international community is not doing protection at the moment, even in cases of attempted genocide. The civilised world loves sanctions (as  long as they are not against Israel) but hates protection (if against Israeli aggression). So the slaughter of women and children in Gaza is set to accelerates while the Great Powers stand aside, attend their summer garden parties or jet away on their jolly holidays. Doctors and scientists who have worked in Gaza and know the situation only too well, have been driven to write in The Lancet http://www.thelancet.com/journals/lancet/article/PIIS0140-6736%2814%2961044-8/fulltext that “Israel’s behaviour has insulted our humanity, intelligence, and dignity as well as our professional ethics and efforts”.

In the fog of inaction, idifference and sheer cowardice one is left to speculate… Are these manoeuvres by the Palestinians being kept out of the public domain for dark motives, such as a desire on the part of the usual suspects to give the Israelis a clear and uninterrupted run at totally destroying Gaza and exterminating its ‘nuisance’ inhabitants once and for all?