Fighter bombers attacking civilian targets in Eastern Ukraine, flying with Ukrainian Air Force markings, have been traced to air bases in Romania, Moldova and Azerbaijan, armed and some perhaps piloted by Poles and even Israelis. 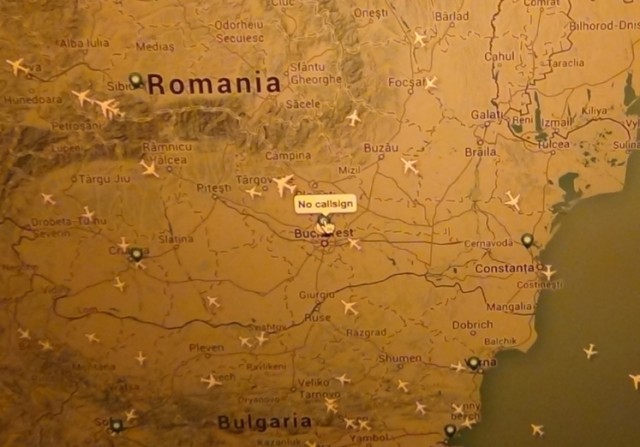 Others appeared to originate from what were believed to be abandoned air fields in Azerbaijan, facilities identified in 2012 by defectors from the Azerbaijani military, as Israeli bases to be used in an attack on Iran.
This is more than an attempt to avoid detection by Russian air defense radars capable of warning pro-Russian separatists opposing the Kiev junta.

This is a gross violation of international law, of national sovereignty of the nations involved and an unauthorized use of NATO military forces, some under the direct command of General Breedlove, in a clandestine terror war against civilians, many of them Russian passport holders.

This week, two SU25 fighter bombers were shot down over the Ukraine after dropping chemical weapons, white phosphorous bombs, on a small village in a predominantly pro-Russian region of eastern Ukraine.  There are even more curious and frightening aspects of this attack.

MSNBC had been using radar-driven plane tracking websites to sell their version of the downing of flight MA17, one American military satellite imagery has debunked, not only based on the 25 mile debris field but imagery that identifies all missile operations in the region as controlled by the Kiev junta.
In fact, in a Pentagon briefing, it was suggested that junta air defense units may well have defected “and then defected back again,” explaining their bizarre hypothesis, more conspiracy theory.

With reports of chemical weapon use against population centers in the Eastern Ukraine, available inventories of these illegal munitions and their locations are critical to understanding the threat.
The US maintains inventories of illegal chemical weapons around the world, some of them convenient for deployment against civilian targets in the Ukraine.  America’s current inventory of chemical weapons stored in Israel has been significantly depleted by that nation in its attacks on population centers in Gaza.
Other weapons storage centers are at Aviano Air Force Base in Italy, Camp Darby US Army Weapons Depot outside Pisa in Italy, on the British held Indian Ocean base on the Island of Diego Garcia and in forward deployment at MK Air Base in Romania.  From Stars and Stripes:

“’It’s an ideal location for us as far as capability,’ Maj. Gen. John O’Connor, commander of the 21st Theater Sustainment Command said in a recent interview with Stars and Stripes.

The U.S. had already constructed 85 buildings capable of supporting roughly 1,500 personnel at Mihail Kogalniceanu – or MK Air Base – for previous missions, O’Connor said.
Beginning in late December, elements of the 21st expanded the infrastructure to accommodate up to 2,000 transiting troops and 400 military personnel who run the operation.”
This facility, initially designated as a “stopover” for troops returning from Afghanistan, regularly sees huge C 17 cargo planes capable of carrying, not only weapons inventories but any American heavy weapons system. 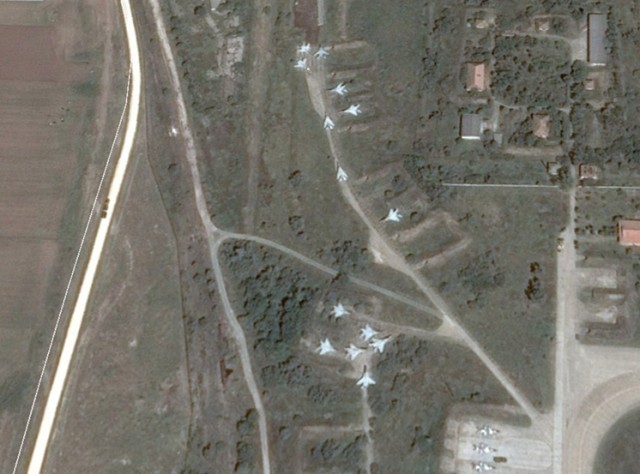 Satellite Photo of Advanced Mig Aircraft “Stored” at US MK Air Base, Romania (courtesy of Google Earth)
More inventories of American weapons are in Azerbaijan, unloaded at the Georgian port of Poti by the USS Grapple in June of 2010 and transferred, according to sources in Georgia, by truck into Azerbaijan.

As US Senator John McCain could so very well tell us, were he so inclined, giving an enemy access to air attack “package” information, routes used for attack and withdrawal, can lead to losing planes.  While a prisoner in North Vietnam, McCain gave such information to the North Vietnamese in trade for special treatment.
According to US Army Colonel Earl Hopper (ret. Deceased), McCain’s information led to the shoot down of over 60 American aircraft by North Vietnamese gunners.  Similarly, with full knowledge of Ukrainian military bases, all of which are under direct radar observation by Russian defenses, bombing attacks on the Eastern Ukraine are far more risky than similar attacks on civilian targets perpetrated by Israeli jets on Gaza.
It would seem sensible to use bases outside Ukraine, particularly if advanced chemical weapons, fuel and maintenance and even pilots and planes were furnished by NATO and “others.”  Radar based evidence suggests specifically that this is being done.
What is not sensible, however, is the thinly veiled deception used to broaden the conflict in the Ukraine.  This week, General Dempsey, chairman of the Joint Chiefs of Staff of the United States, while speaking at the ultra-conservative Aspen Institute, warned of how President Putin threatened to broaden the conflict in Europe through alleged use of Russian artillery in support of separatist forces.

Giving General Dempsey the benefit of the doubt, he may well be “out of the loop” on the fact that the United States aided by Poland, Romania, Moldova, Azerbaijan and Israel, the latter two not NATO members, has violated both international and American law, or so the evidence would indicate.