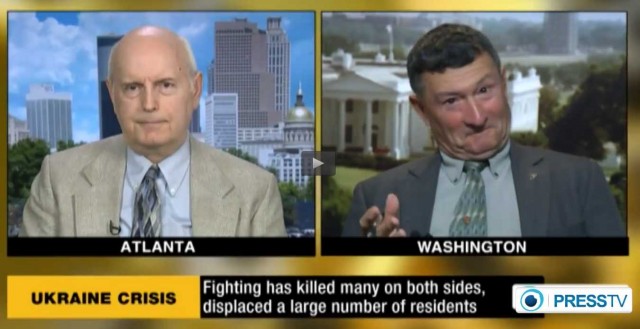 Ukraine invasion threat by Russia is a hoax says analyst

[ Note: The Debate show with Frederick Peterson, the NATO sock puppet was more fun than a barrel of… oops, I can’t say that.  But suffice to say that he takes the Olympic Gold medal for the worst pandering I have experienced on Press TV, worse than Anjem Choudary, the radical Muslim in London, who held the top spot until this retired Marine officer came prancing along.

To my astonishment, he rolled out the old super commie Soviet Union canard, even pre-Gorbachev, about the enslavement of Eastern Europe (something the Allies effectively agreed to at Yalta, of all places, and a poetic twist there).

He actually said the Russians wanted to re-establish the Old Soviet Union, and he is not an asylum escapee. He is another one of the mouths for hire, a Fox News puppet, and actually said NATO was no threat to Russia whatsoever. We will now have to buy all the troops boyscout uniforms in that case and give them all air rifles.

Missing from his story was how the old Soviet Union agreed to be dissolved without a huge loss of life and more destruction in a part of the world that has seen enough. Part of the history of the Cold War is how the Russian threat was hyped by you know who, and why. Our protectors all pretended to be totally surprised by the sudden collapse, even though the upper ranks knew that our own Lee Wanta had crashed the ruble.

But as you will see, Fred is used to fluff TV where he sticks to his talking points and takes what he thought would be the high ground with the first segment. But I pulled the rug out from under him pronto. Watch how he keeps looking at his notes for some Jim Dean comebacks, but they aren’t there. I was trying my best to not look like the cat that just ate the canary.

I have been trying to run down his title, Congressional defense policy advisor, and on Google all I get are his Press TV shows, a sign that it is a TV title someone dreamed up. Monday, I will ask Congress to help me verify the position. I did find him at one of the shill online news forums, WorldTribune.com, as their national security guru.

They ran a story on August 26th that the Iranian 81st division had crossed into Northern Iraq with thousands of troops, its main battle tanks, helicopters and APCs. The sources were unnamed Kurdish ones. Why the Kurds would not be an official source was strange, too… an armored division is hard to hide.

We thought maybe we had been in a coma and missed, so we called around. It is a planted hoax, of course. And we ran down the source…”On Aug. 21, Kurdish social media activists published pictures that appear to depict elements of the Iranian 81st Armored Division entering southern Kurdistan via Khaneghein, north of Jalawla.” Yep, those Kurdish social media activists it seems are part of Col. Peterson’s international network.

Once the story was planted in WorldTribune.com some other NeoCon hack platforms picked it up. I found it at Real Clear Defense, another shill website with no names or contacts other than Mr. Info.

Washington is full of people for sale like this, particularly the second career psyops officers working the ‘expert’ scam. How he got on the Press TV guest list is beyond me, unless it was just to have a foil. Enjoy the show. I sure did. ]

Press TV has conducted an interview with Jim W. Dean, Managing Editor, Veteran’s Today, Atlanta about the Ukraine conflict now under ceasefire, how NATOs agenda and sanctions are affecting the situation there.

Press TV: Press TV guest Mr. Frederick Petersen (Congressional defense policy advisor, Washington) paints a picture that NATO is not a threat to East Ukraine or even to Russia. How do you react to that?

Jim Dean: Well, it’s probably one of the most incredible statements that I heard during the whole crisis.

Coming from a marine officer it’s rather shocking – because we have a lot of marines at Veteran’s Today – especially when it comes to a marine officer that works for a think-tank that’s associated with the neocons and the AIPAC lobby.

And the DC area is covered with them. They basically say that NATO is in some kind of defensive mode here when we have two decades of NATO expansion. Ukraine has been in its crosshairs now for over ten years.

Russia has not been spending billions of dollars to instigate color revolutions in Eastern Europe. They have not been trying to push their own missile shield into these countries. It’s the West that’s been doing this and they have a lot of people that are behind them on this. They have their own agendas, like the defense contractors…

And part of this whole Ukraine thing… there has been a whole psy-ops effort to pretend that there is some kind of Russian threat, when they have no offensive capacity whatsoever. All their military spending is completely defensive and it’s just an outrage to have to listen to this from a retired American military colonel.

Press TV: Mr. Petersen is speaking about history and we do know the history of the Soviet Union. Is he making a legitimate point saying we cannot completely disregard the idea that may be Russia doe have expansionist policies?

Jim Dean: This is just your neo-Cold War psycho-babble that we’ve been hearing for over a year now. They’ve really come out in the open with this ridiculous old Soviet era routine.

Veteran’s Today is an intelligence site. We’ve had over three generations of top security people going all the way back to the beginning of the Cold War. Some of them even include Ronald Reagan’s National Security Advisor Leo Wanta. We know the history of this. We’ve had people who’ve actually been historians of some of our major intelligence organizations. We know the history of this backwards and forwards.

This trying to paint a false threat to ‘attack the American people and the Europeans’, that there is some kind of aggressive threat from Russia, an attack on the democracies of these peoplewhen it is a psychological operation to do nothing more than prepare them to fund NATO expansion, and also to bring the missile shield up to the Russian border which is a terribly destabilizing move. And it’s also costing the European people more economic devastation.

Press TV: Mr. Petersen says Russia should join NATO rather than to oppose its expansion. How do you feel about that?

Jim Dean: Russia was already cooperating tremendously with the West. They have a 110 million dollar trade deficit with Europe; they coordinated with the war on terror; and there are a lot of levels. So there has been tremendous progress made until some group of people somewhere decided they wanted to dial that back.

And so they started a color revolution also in Russia, which Mr. Putin had kind of nipped in the bud when the oligarchs were taking over the country – they took over the media, then they were going to start actually running candidates that actually rule Russia.

So you had a subversive force actually trying to subvert Russia using their system, which Putin was one of the key people that he pushed them back and ran the oligarchs off who were basically given safety in the West.

So what we have here at the expense of the European economy, which is now thousands, tens of thousands, maybe hundreds of thousands of people are going to suffer with this new aggression plan. The other thing I’ll mention about NATO as a military force other than air power is a joke. Most or all their bases are closed; they couldn’t even cover the ammunition for a no fly zone in Libya.

So this whole fraud that they’re pulling here is to start dialing up the spending so that they can build up a force and they used the country of Ukraine as a sacrificial lamb to try to build this up. We think at Veteran’s Today that this is a criminal act and we’re going to be hunting down and exposing everybody that we can find that was involved in this.

And NATO for what they’re doing now, there are a growing number of people in the active military that don’t want to be mercenaries for commercial interests and fight for trade markets. So there is going to be getting a lot of pushback [on NATO aggression] – more than they expected. And if we don’t barbecue them we’ll certainly be able to debate them very well.

Press TV: What are your final comments and your reaction to what our guest has said?

Jim Dean: I’ll just close by saying that again we consider this whole Russian threat thing to be a total hoax. We could fill a stadium with military analysis that basically says Russia is in a totally defensive position and all their money is spent for defensive spending.

This is very similar to the hoax of the Iranian nuclear threat, which is completely bogus and Iran is also spending all of their money on defense because they are the ones that are getting threatened with pre-emptive strike.

That doctrine of pre-emptive strike came out of the West with the neo-Cons in the late 1990s and it is still living now and we have a lot of people getting on board the train.

And the poor people of Ukraine are the ones that have really paid a terrible price; and the Europeans are going to be paying also for the tremendous blowback we’ve had from their sanctions stupidity that have made so many people suffer for no reason except for some military head-trippers that want to reinvent the Cold war again.