“Because the United States itself has a long record of supporting terrorists and using terrorist tactics, the slogans of today’s war on terrorism merely makes the United States look hypocritical to the rest of the world.” – Professor William Odom, formerly President Reagan’s NSA Director.

VT would like to give a special thanks for the senior European statesmen and women for stepping forward with their timely letter on the eve of what we hope will be the final Iran nuclear talks before the long hoped for settlement. Their letter was printed in The Guardian…Jim W. Dean

Javier Solana – Former EU high representative for the Common Foreign and Security Policy and secretary-general of the Council of the EU; former secretary general of Nato

Jean-Marie Guéhenno – President and CEO of International Crisis Group, former deputy joint special envoy of the United Nations and the League of Arab States on Syria,

Norbert Röttgen – Chairman of the foreign affairs committee of the Bundestag and former federal minister for the environment, nature conservation and nuclear safety, 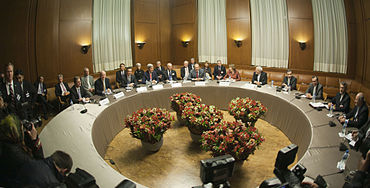 As the November 24th deadline approaches for the Iran and P5+1 nuclear talks, the lines between those for peace and progress, versus war and greed have never been more clear.

The enemies of peace will launch any last minute deal-killers they have been saving, which might include a substantial false flag terror attack. The forces for peace must come down from their stadium seats, out onto the playing field to hold and protect the progress that has been made.

The Israelis have done everything they can to derail the talks, from threatening to attack Iran on their own; to trying to replace Obama with Mitt Romney who promised an attack on Iran if elected, since he’s willing to misuse the American military that way.

We all know now that the long peddled claims of a secret Iranian nuclear weapons program was orchestrated lies — pre-staging public opinion for an American attack on Iran during the Bush-Cheney gangster regime.

After almost two decades of Israel claiming that the Iranians would have the bomb in a year or two, they did not submit one item of proof for those claims during the settlement talks, yet are still not completely discredited for the threat that hoax was to all of us.

VT’s Gwenyth Todd broke up a Bush-engineered false flag attack — a bombing of US forces in Bahrain that was to be blamed on Iranian-controlled Shia terrorists. Gwenyth was to be murdered as part of the plan when she was baited into going out on what we call in the Intel business “the last mission”, where your chance of survival is zero because your own people are going to kill you. She made a last minute change of plans, which saved her life.

Israel and Western Intel murdered Iranian nuclear scientists as part of their hoax, and sabotaged an Iranian centrifuge facility, which could have caused a major nuclear accident.

Those were the Bush days, and this is Obama’s time. The high point of his foreign policy legacy could be an Iran nuclear settlement, and he certainly needs it to counter the disaster of his multi-year terror attack on the Syrian people, just because he does not like who the Syrians elected.

And it looks like Obama is creating a Syria Two in Ukraine after having pulled a regime change there and sent the country into an economic tailspin, in a chaos creation ploy to move NATO up to Russia’s border — a gross breach of America’s assurances given during the peaceful Soviet breakup. American-backed terrorists in Syria and Iraq kill more innocent people in a week, even a day, than died during the fall of the Iron curtain.

During the past year of negotiations and reduction of sanctions, Western business have traveled the yellow brick road to discuss investment opportunities in anticipation of a successful resolution.

An economic boom is expected in Iran, and the recession-weary Western export companies want to get some relief by being part of that growth. Germany alone has done $1.6 billion in exports under the interim sanctions reduction.

The Ex-EU diplomats contribute their wisdom

With this background, I was not surprised to see the EU former diplomats’ November 5th letter in support of a successful conclusion of the talks.

But I was surprised to read such an insightful presentation of their views. With the current country leadership being of such low quality these days, it is a breath of fresh air to have senior diplomats and leaders step forward with their well-needed wisdom.

They reminded the Western negotiators of the huge progress made through the increased inspections and enriched uranium stockpile reductions, and other concessions from Iran, and after many more months the ironing out of the many technical issues to bring us to the final political decisions to be made.

Failure would hurt everyone, especially the Europeans, who after Iran, suffered the most due to lost business. Pushing the reset button on the talks now would add more instability in a region that is reeling from Western and Gulf State geopolitical intrigues aiming to bring the region under their complete control.

The Western proxy terrorists unleashed upon Syria and Iraq, and potentially on Lebanon, are setting the region afire — just like our VT counterterrorism experts predicted they would be uncontrollable like the former Taliban fiasco that has destroyed so many lives.

The region needs an engaged and stabilizing Iran, with its long history of non-aggression. The diplomats’ letter stated it perfectly:

“The goals of non-proliferation, global and regional security, de-escalation of burning conflicts in the Middle East and the demonstrative effect of successful multilateral diplomacy in these troubled times will all significantly benefit if a good deal is achieved.”

This was a point I have not seen mentioned before… that the successful Iran nuclear talks could be a stepping stone to the settlement of other long-running disputes. These senior statesmen understand that real leadership has to be done by example to have credibility and attract followers.

Today, that old school method has been replaced by Hollywood PR hustlers and social media specialists, who for some strange reason feel that people who cannot, or won’t write a complete sentence could ever be part of a solution to anything. They sell their skills to pretend-a-leaders that have “realities” to be created in the public mind with focus group-tested verbiage and a big media budget.

We have seen this leadership on the cheap with Obama’s broken record mantra of “Assad must go”, when any real counterterrorism expert would tell him that the worst possible plan would be triggering the collapse of the Syrian army with ISIL on the rise. ISIL would ride their 20mm mounted Toyotas through the streets of Damascus faster than the North Vietnamese got to Saigon in 1975, which was overseen by equally deluded American leaders.

The reports this week of Obama’s direct letter to President Rouhani asking him to actively join in with the anti-terrorism coalition against ISIL acknowledged not only America’s inability to put the ISIL genie back in the bottle, but a total lack of reality.

Obama and his crew are not smart enough to admit the policy disaster on Syria, and unite with Syrians and their ground troops to put the double whammy on ISIL.

So why should Iran want to actively engage ISIL with its military, while allowing the US to still keep trying to destroy Syria, Iran’s long time ally? That would be beyond stupid.

After living under the colonial boot and then America’s CIA coup for so many years, Iran is not going to be looking to be anyone’s cannon fodder, least of all America’s. If I were Iran, as soon as the nuclear settlement was done, I would challenge Obama to begin a similar but different process with Syria with Iran as a mediator.

If Obama refused, as a backup Iran could offer to host a “How to end state-sponsored terrorism” conference. That would drive the Saudis nuts, but we would at least be dealing with a real threat, not the bogus ones that the Western spinmeisters have used as a distraction on us to justify their forward military deployment. 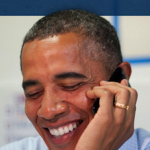 It is time to make support calls now.

So all of you out there who support keeping the lid on the warmongers, start making your calls to your political leaders to demand they support the peaceful resolution of these talks, and call those opposing it to let them know you will do all that you can to see to it that they pay dearly if they were to wreck it. We have no voice… unless we actually use it.

And please remember that after Iran, we have to move on to Syria, and then to Ukraine, and extract the maximum political price for all those engaging in offensive regime change.

The United Nations needs to be put on the spot to outlaw not only state-sponsored terrorism but regime change, under penalty of automatic sanctions. No one else deserves it more than the West.