Home World US should work with Syrian Army against ISIL 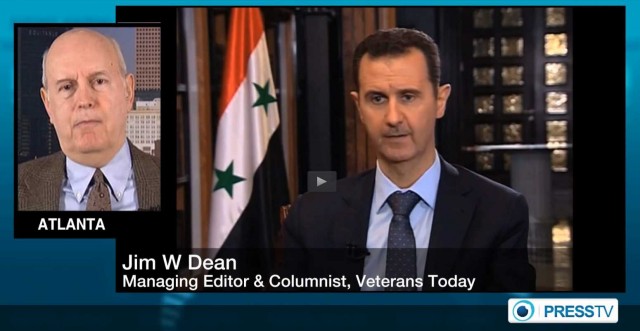 US  should work with Syrian Army against ISIL: Analyst

The United States should start cooperating with the Syrian Army in order to roll back the ISIL terrorist group, says an American analyst.

You can listen to the 3:30 min phone interview at Press TV here.

“They came up with this totally failed strategy to begin with… They realized that to really defeat ISIL with the air campaign, they were going to require about 1,500 bombing sorties a day,” Jim W. Dean, managing editor of VT, told Press TV.

The only reasonable way to reduce ISIL into an ineffective group is for the United States to change its current strategy of regime change in Syria and disintegration of the Syrian Army, he continued.

Dean said the removal of President Bashar al-Assad would make a huge dent in the Syrian Army’s morale, giving a boost to the ISIL terrorists.

“The US has to basically give up the overthrowing of Assad and become an ally in Syria and work with the Syrian Army” to take out ISIL, he said.

Secretary of State John Kerry has said that the United States should be deeply engaged in the Middle East because of the crimes committed by the ISIL terrorist group.

“We have to be deeply engaged – deeply engaged – in this region, because it is directly in the interest of our national security and our economy, and it is also in keeping of who we are,” Kerry said at an annual policy forum in Washington, hosted by the publisher of Foreign Policy magazine.

“I think what Kerry is doing is trying to put window dressing on a situation where they see the policy is still not working,” Dean noted. “We could have one of these (wars) that could drag on forever because of another failed war policy by the US.”

US President Barack Obama has rejected any alliance with the Syrian government in the fight against ISIL. “There’s no expectation that we are going to in some ways enter an alliance with Assad,” he said Sunday after a G20 summit in Brisbane, Australia.

Obama has reportedly asked his national security team to review the strategy toward Syria after concluding that the ISIL terrorist group may not be defeated with President Assad in power.