[ Editor’s note: Having your cake and eating it too. Who needs to have that explained to him? We hold these truths to be self-evident that all men are created equal. Questions?

So, let me get this straight… After about six millennia, women are still spiritually unclean during certain times of the month, and there’s a beauty to the cleansing bath and honoring the spiritual aspects between men and women, and not touching each other in public. There’s a nobility to helping men keep their covenants and not being a distraction. That becomes the one supreme directive. Woman’s role as the rib.

Nice. But that professed nobility of their supreme directive seems to be incapable of granting equality to any other competing idea. There is no equality of philosophies — only one can triumph and dominate, and this is the philosophy that is currently running policy in America and Israel, and is partly responsible for the ripping up of our American Constitution. Israel never had a constitution in all its decades of existence.

Alexander Efimov helps sheds light on the dire human rights situation in Israel, as it encompasses its corner of the Mideast. The Zios have stated their plan to solidify occupation of Palestine and sweep across the Levant, with the assistance of the West… No wonder moderates are said to be leaving Israel.

A semi-valid argument is always presented by any orthodoxy in that the submissive parties are in agreement with their role, as is their right. But, the untold story is the not-infrequent acts of intimidation and even repression that women experience. And, as Gilad Atzmon has repeatedly mentioned, it is the Jewish Left that empowers others out of fear and guilt and lack of mental clarity, as it strengthens and enforces the power of the fundamentalists. Power is never given, it is only ever taken — and orthodoxy has learned this. The Left is good at rolling over and submitting to power.

And, no two ways about it, that old power thing has a metaphysical component. It’s time for the rest of us to have a good look at the person in the mirror and find out if we’re going to once again sit on our hands and allow the promise of Western egalitarianism to melt into air, before America gets dragged further into this profound mess.

Our civil rights heroine Rosa Parks refused to sit in the “blacks only” section… Will Israeli women get tired of breathing the exhaust fumes at the back of their buses? …Erica P. Wissinger and Jim W. Dean ] 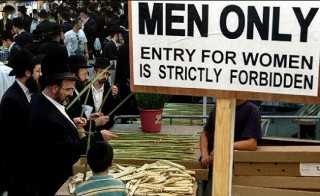 The Administration of the United States as well as the authorities in Israel, day and night, never tire of repeating that “the State of Israel is the only democracy in the Middle East.” However, some Israeli realities call into question this assessment.

One of typical phenomena of Israel was discussed in American Jewess Elana Sztokman’s book “The War on Women in Israel. How Religious Radicalism is Stifling the Voice of a Nation”. In many, she writes, primarily orthodox circles of Israel misogyny and discrimination against women thrive. And this discrimination is supported by the authorities, the state itself, where Judaism is the state religion.

In public transportation in Israel (primarily buses) there are “special compartments in the rear seats.” Only women can sit there. In Israel, there are cities where women are required to walk only on certain sides of the street, and there are places where women are not allowed to be. Sections are allocated for women in post offices and banks, in parks, and at entertainment attractions… Segregation on buses, allocating special walkways for women, and especially the ban on performances by female artists in army units is increasingly becoming the norm in Israel. Gender segregation is increasingly spreading to other areas of life, where there was nothing like this previously. 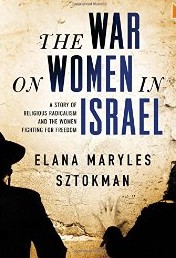 One and a half years ago in Israel there already were more than 150 bus routes, where the segregation policy was in effect. Public transport in the most populated areas of the Jewish state is forced to comply with the laws of the Sabbath, that is, it does not operate on Saturdays. There was a time when this sort of segregation mainly occurred in the synagogues, but today it is increasingly spreading to other areas of life, in the public sphere, in the army, and even in private homes. In houses that pay particular attention to religious precepts of Judaism today there are separate places allocated just for women. Women are only allowed to eat in the kitchen, separately from men.

However, ultra-Orthodox women often support this approach. A parishioner of one of Jerusalem’s synagogues admitted: “Women are raped in the universities, in the Israeli army. And all because the women there are not segregated from men, and it creates many temptations. This is a much worse violence against women than putting them in the back of the bus.”

“Sexual harassment of women, unfortunately, occurs quite often in our lives,” accepts Elana Sztokman. “However, this is not a reason to enclose all women in separate sections. There is the issue of sexual violence, but the way to solve it is to educate men, and not to put women behind a fence.”

Elana Sztokman in meeting with readers recalled the legendary Rosa Parks. Rosa’s refusal to sit behind the segregated “whites only” and “blacks only” bus sections once kindled the flame of civil disobedience and was an important step in the struggle for civil rights in the United States. Sztokman said that for her, as an American religious Jew, to be in the back of a bus in Jerusalem was totally unacceptable. But in Israel, this situation has not yet caused mass protests.

Sztokman remarked: “The War on Women in Israel” is not an invention of its own religious orthodoxy. Over the past forty years almost all American ideas and values have taken root in Israel: political, economic and social, religious and secular, right and left, conservative and liberal. Jewish fundamentalism, both ultra-Orthodox and right religious nationalism was also largely imported to Israel from the United States. Until now, this has largely been instigated by graduates of religious schools in Brooklyn – the “yeshivas”.

Israel declares itself to be a secular state, but the process of religious revival in Israel is identical to the processes occurring in the Middle East. Like most of its neighbouring Arab and Islamic Republics, Israel’s religion is not separated from the state, acts of civil status come within the purview of religious courts.

One of the most sensitive spots and hot spots of the struggle for women’s rights – and this is the holiest site of Judaism – is the Western Wall. In her book Sztokman describes the history of the women’s struggle for the right to pray there beyond the special sector. The “Women of the Wall” movement was created in the 1980s within a much broader movement for the admission of women to the prayer halls of Orthodox synagogues. From the outset, the feminists in response to their demands were met with violence at the Western Wall.

The author of article you are reading was fortunate enough to observe the first appearance of “Women of the Wall”, when the indignant crowd of religious Jews, headed by Shmuel Rabinovitch, Rabbi of the synagogue of the Wailing Wall, attacked the worshipping women. Chairs, rocks and even bags of filth were thrown at the women.

The case of admitting women into the male area at the Western Wall has come before the courts. In 2011, a new stage arose. The Israeli police did not shy from taking sides and began to arrest the “Women of the Wall”. The courts also toughened their stance, and the fenced part of the area recognised as an “orthodox synagogue”, even though the place was built as a result of statements after the victory of the Six Day War that “The Wall is ours!” and will be the property of the Israeli nation, and not of a specific religious community.

Sztokman herself is from Brooklyn. She grew up in a religious Jewish quarter and now lives in Israel. She does not consider herself an outsider to the religious life any more than she sees herself as a stranger coming to teach people how they should live. “The war against women,” she says, “is the product of ultra-Orthodox communities, as regards the whole of Israeli society and is offensive to the rights of all women.

Sztokman knows what it is like to be and feel part of the “women’s section”. “In no way do I want to impose anything on anyone,” says Sztokman. “At the same time I do not want religious orthodoxy to impose something on others. In society, we must leave room for other lifestyles, for other points of view on life. I’m glad if someone is happy when living a religious life, but if someone is unhappy, it must be possible for them to live in their own way.”

In the ultra-Orthodox community there are many unfortunate women. There are hotlines for victims of violence. The organization Bat Melech established two shelters for women from Orthodox communities. And the resistance of religious circles is great. Last year, it was reported that the Chief Rabbinate demanded cell-phone companies to block the phones of the emergency organization Bat Melech and other psychological assistance services.

Preparedness to use violence is increasingly embraced by Orthodox Judaism, which is often supported by government structures.

Israeli society experienced ultra-Orthodox protests for the first time in 1986 in Jerusalem when almost all the bus stops were burned because advertisements for fashion and cosmetics were displayed there. It was then that the Jerusalemites waiting for buses in the heat, deprived of their usual shade suddenly felt anxiety about their future. Authorities in “free” Israel are unlikely to side with Elana Sztokman. By their nature, they are focused on segregation, not only of the Palestinians, but as in this case, of women.