Home World NEO…Henry Kamens – Will Friends of Russia be railroaded?

[ Editor’s note: Henry takes us into what is a news backwater, the simmering situation between the Republic of Georgia and its uppity former possession, Abkhazia. If it were not for my current work, I probably could not find it on a globe in five minutes.

The NeoCons like to play “modern barbarian games”, with their own version of “invading hordes” inside countries that are letting the US do nasty and illegal things like bioweapons development — and maybe even bioweapons testing — in these places far from Congressional investigation committees.

The South Ossetian war was not only a disaster, but something much worse… stupid. The Western wizards brought in Israeli commandos to lead the attack the first night by taking out all the Russian peacekeeper’s armor and killing over 300 of them in the process, so the Georgian army could more safely launch their attack in the morning.

But this was not done before shelling South Ossetia’s city of Tskhinvali all night. And then, something only the Israelis could come up with, the attack stopped just long enough in the morning to fool all those hiding in their cellars to think it was safe to hit the road fleeing north, and then the Georgian army started shelling the main roads. The Israelis, of course, had flown out.

The Russians were on to the whole scam. They let Georgia get their attack cranked up to the point where it was obvious to even the birds who the aggressor was, and then they launched their counterattack that went through the Georgian Army like a hot knife through butter.

Frantic calls for US intervention went unanswered. The US really had nothing it could do, and yet had not stopped the stupidity in the first place.

I suspect some dummy felt it was a no lose game, in that if Georgia lost, the Bush-Cheney crowd would be crowing about Russia launching its initial attack to take over Europe. Yes, they really do think we are that stupid, they tried it again this year in Ukraine… Jim W. Dean ] 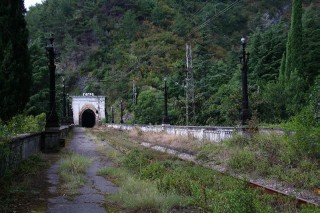 Much fuss about nothing is being made over the recent Russia-Abkhazia Security and Cooperation Agreement. It is potentially a win-win situation for all, but some of the stakeholders are more inclined to derail than normalize relations between Georgia and its former region that broke away 20 years ago.

A region in need of economic development will receive much financial assistance. As usual, the West is protesting but not actually doing anything, as it knows that it is not willing to provide financial assistance without strings attached. This is for one very good reason, in that the West has more to gain from this agreement than either Abkhazia or Russia, since the United States can use economic means to fan the flames of discord to maintain the status quo in Georgia.

All the while, the real stakeholders to disputes over Abkhazia know very well the significance of the railway link and what gains can it bring for alternative conflict resolution. Georgia knows it history, one that it would like to conveniently forget. It cannot now claim in retrospect that it sent troops in to protect the railway line and then try to block an opportunity to rebuild it, connecting it to Georgia proper.

Rail links with Abkhazia will bring about better diplomatic links. Khajimba is right to say that “Georgians themselves should be interested in restoration of the Abkhazian railway,” and express surprise that the Georgian side “has not objectively considered the option as yet”.

Abkhazia has nothing to fear from railway links with Georgia now that a security agreement has been signed with the Russian Federation. Only the Russians would be able, in practical terms, to use these for aggressive purposes.

However, that would serve no purpose in today’s reality. Abkhazia will never take any offensive action without Russia’s approval. So we have a balance that can now be maintained by normal economic relations.

Armenia also wins in the potential restoration with a substantial economic interest in the line. Involving Georgian and Armenian companies, with or without state support, in rebuilding the line would prevent Russia doing anything the others didn’t agree with and couldn’t stop. Potential Russian aggression would be stopped in its tracks, as it were. Being pragmatics has the greatest potential now to bring about benefits to all.

But for the US and its NATO allies, Abkhazia is the latter-day Afghanistan — the mistake waiting to happen for anyone who wants to get involved in its affairs in order to continue proxy conflicts. It is clear that no one can win, especially not the Abkhaz or Georgians.

Sooner or later Russia will be as concerned as Georgia about trying to find a way out – and there is one project which might just save everyone enough face to let everybody gain with dignity. If implemented, it is the link that can provide that.

The link serves a variety of purposes, which are more to do with exposing US double standards than anything else. But the bluff Georgia and its US allies can call is a railway line, as they still want to meddle in regional affairs.

Let us not forget the Armenian issues, and its economic plight because of the yet-unresolved conflict with Azerbaijan over an ethnic Armenian enclave.

There used to be a rail link between Russia and Armenia which went through Abkhazia and Georgia. Indeed, one of the harbingers of the long-planned 2008 war was the restoration by Russian military engineers of part of the Abkhaz section of this line.

Armenia is still under international blockade as a result of the Nagorno-Karabakh conflict and many of the routes into and out of it remain closed as they pass through its enemy Azerbaijan or other countries allied with Turkey. It is another territory being largely bankrolled by Russia, though which almost all of its goods go in and out.

The restoration now provides Russia the golden opportunity to demonstrate it has broader good intentions, not only with Georgia but the region a whole. It can kill several birds with one stone by finishing the job, and the West can do the same by letting it.

Georgia can defray its own claimed fear of Armenian separatism by economic collaboration, as ethnic Armenians being dominant in the Javakheti, South Georgia, bordering Turkey, and numerous in other Georgian regions, by rebuilding this line rather than investing in the previously mooted high-speed highway project which would link Javakheti with Armenia rather too closely for comfort.

All the while Russia can continue to demonstrate that its presence in Abkhazia is not designed to provide a military threat but has broader regional benefits. Restoring the railway line would associate Russia with civil improvement projects as well as guns and would provide some justification for the sheer number of troops in Abkhazia, who could be deployed on this project.

Both the US and Georgia could demonstrate that they are not against the economic improvement or Abkhazia and are only objecting to the unauthorized Russian presence, and its military aspect, rather than improvements to the region as a whole Russia is equipped to carry out.

All sides can also demonstrate goodwill in the current peace talks impasse, in which Georgia does not recognize the Abkhaz delegation or have official diplomatic relations with it or Moscow, by showing they are prepared to work together on practical projects and leave political disputes and formulas to one side.

So the West still wants to gain by the creation of an untenable situation in Abkhazia. But in reality it can ask Russia to put its money where its mouth is by promoting a project which helps all sides without prejudice.

Russia has nothing to gain by ignoring such overtures – and cannot complain about the expense, given the enormous guarantees made to Abkhazia designed to serve Abkhazia regional stability.

Few now remember that the Abkhaz-Georgian war of the nineties was ostensibly fought to protect rail wagons exporting food and wine to Russia. These were being robbed en route, and the Georgian National Guard was sent in to protect the line.

As Georgian president of the time Edward Shevardnadze told the press, “trains running from Sochi to Sukhumi were being attacked and robbed all the time. Russia, Ukraine and other countries wrote to us in protest and demanded that we do something about it. The police weren’t up to the task so we had to send in the army.”

The ragtag National Guard was not actually an army but an extension of the criminal gangs, which is not a figure of speech, who put Shevardnadze in power in the first place. Predictably they proceeded to Sukhumi, ransacked the city, and went on a campaign of looting and raping. A situation which could have been peacefully resolved by real leadership turned into a full-fledged civil war.

The 60,000 IDPs created by this have not been returned to this day. The conflict did however suit Shevardnadze — either he would wipe the Abkhaz off the face of the earth, thus resolving that problem, or destroy the criminal gangs and take over their business, ultimately succeeding in the latter.

The lives lost and displaced were not part of this typical calculation, but this is what the world came to expect from the leader whom Bill Clinton praised for having “embraced democracy” at that time.

The West now has an opportunity to use the rebuilding of the Russia-Abkhazia-Georgia-Armenia railway link as a means of fostering good relations which will help everyone move on from their present untenable positions.

The West, too, is in an impossible situation in Georgia. It has backed the wrong horse for so long – because it has made it the wrong horse – that there is no longer a point to its dirty tricks, as plenty of other countries are equally well equipped to be the CIA arms transit hubs and terrorist training camps for the next round of US interventions.

The political deadlock over Abkhazia can continue as usual but be rendered irrelevant by rebuilding the railway line. 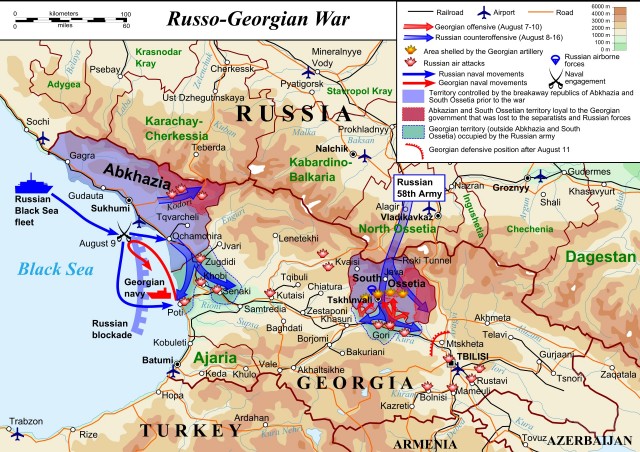