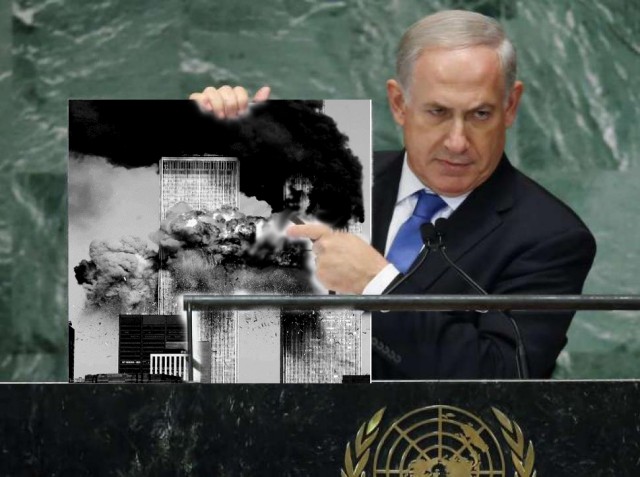 False Flag Weekly News focuses – as the name would indicate – on false flag operations. Why? We’re hoping to put the false flaggers out of business. As people wake up, the risks rise and the payoff shrinks. Pretty soon it won’t be worth it. As killing relatively good leaders and starting wars becomes more difficult, hopefully goons like Netanyahu will become relics of a bygone age.  -KB

What will Bibi Netanyahu do?

Bibi is fanatically opposed to any P5+1 deal with Iran. But P5+1 leaders, and Iranian leaders, have worked out the framework for a deal.

Bibi wants to use the Israeli lobby’s political muscle, especially in the USA, to block the deal. But the Israeli lobby is divided. While AIPAC – representing dozens of Israeli billionaires, thousands of millionaires, and half a million tireless fanatics – supports Bibi, the majority of American Jews do not.

The American people as a whole don’t support Bibi, either. A new Hart Research poll shows that 61 percent of Americans support the framework agreement between Iran and the P5+1, while only 34 percent oppose it.

And then there is President Obama. Credible reports suggest that Obama and Netanyahu genuinely do not like each other. Obama apparently wants to end America’s 36 years of extreme hostility toward Iran – and in the process give Bibi a black eye.

Historically, in such situations, ruthless leaders like Bibi Netanyahu have occasionally resorted to “false flags:” High-profile acts of spectacular violence designed to change policy by powerfully impacting public opinion. The two most common categories of high-impact false flags are assassinations and terror attacks. In both cases, the violence is committed by professionals, then falsely attributed to the attackers’ enemies.

So what could Bibi do? Netanyahu could conceivably order his intelligence assets, including hundreds of the world’s most highly-trained assassins supported by tens of thousands of well-placed “sayanim” (Mossad volunteers) to try to assassinate Obama or stage a terror event or apparent military attack falsely blamed on Muslims in general or Iran in particular. Such an act, Bibi might imagine, could transform the political landscape so that the P5+1 deal would be impossible, while war would be natural if not inevitable.

Amazingly enough, Netanyahu’s American supporters are openly calling for this! Andrew Adler, the editor of the Atlanta Jewish Times newspaper, has published an editorial urging Netanyahu to order the assassination of President Obama. And Patrick Clawson, Director of Research at the AIPAC-allied Washington Institute of Near East Policy (WINEP) has advocated arranging a fake “Iranian attack on America” to trigger Netanyahu’s avidly-desired US war on Iran.

In his speech calling for a false flag blamed on Iran, Clawson admitted that such false flags are the customary means used to start wars. And he is right. Every major American war since the Mexican war has been sold to the American people, and officially launched, by way of a fabricated or orchestrated “enemy attack on America” for which America’s own leaders, sometimes in collaboration with friendly foreign leaders, have been responsible. From the nonexistent “Mexican attack” of 1846 to the USS Maine in 1898 to the Lusitania in 1915 and Zimmerman telegram of 1917 to the eight-point-plan that produced Pearl Harbor in 1941 to the Gulf of Tonkin in 1964 to Nurse Nayirah and the fake satellite photos of 1990 to September 11, 2001 and alleged Iraqi WMDs, every American war is sold to the people through one or more spectacular acts of deception.

Assassinations often accomplish the same objectives. The assassination of President Kennedy, for example, prevented the US from making peace with Vietnam, Cuba, and the USSR. The JFK hit was falsely blamed on a communist (actually a low-level CIA-FBI asset pretending to be a communist) in order to create an anti-communist atmosphere in which the Vietnam War and the larger Cold War could flourish.

Some false flags don’t work as planned. One “false flag fail” was Operation Northwoods, a 1962 plan by American military commanders to murder Americans in fake Cuban attacks. (It was called off by a disgusted President Kennedy). Another spectacular failure was the 1967 USS Liberty attack, in which Israel (with a nod and wink from US President Johnson) intended to murder every crew member aboard the unarmed spy ship in order to falsely blame Egypt and bring the US into the 1967 Arab-Israeli war. The plan didn’t work because the Liberty crew was able to cobble together damaged communications equipment to send a message that the attackers were Israelis, not Egyptians.

The most recent high-profile false flag – January’s shootings in Paris – also appears to have been a failure. As bestselling Israeli investigative journalist Barry Chamish has suggested, the Charlie Hebdo and kosher deli shootings appear to have been orchestrated by Netanyahu in order to convince France’s 500,000 Jews to move to Israel. In the new book We Are NOT Charlie Hebdo: Free Thinkers Question the French 9/11, Chamish says of Bibi’s plan to terrorize French Jews into moving to Israel, “It looks like it’s not going to work terribly well.”

Also in We Are NOT Charlie Hebdo, a former US Assistant Secretary of the Treasury and Wall Street Journal editor, Paul Craig Roberts, suggests that the Paris shootings were orchestrated in order to keep France subservient to NATO. But that won’t work, he adds, because the right-wing nationalist parties will be the ultimate beneficiaries.

So it appears that the key objectives of the Charlie Hebdo false flag – supporting Israel by punishing France for recognizing Palestine, terrorizing French Jews into fleeing to Israel, and forcing France to remain an obedient slave of its NATO masters – will not be achieved. Charlie Hebdo may go down in history as one of the biggest-ever “false flag fails.”

The Charlie Hebdo false flag failed in part due to the quick response by truth-seekers. Within days of the event, every intelligent, historically-aware person on earth who cared to know was already aware of evidence suggesting it was a false flag. And in less than three months, the book We Are NOT Charlie Hebdo brought together twenty of the world’s leading public intellectuals to question the mainstream propaganda.

So we may be living through a paradigm shift: A quantum leap in public awareness of false flags that is making it ever-harder for unscrupulous political leaders to deceive the public by way of spectacular, scripted psy-ops. Bibi Netanyahu would be well-advised to reject the advice of people like Andrew Adler and Patrick Clawson, and leave such devious, murderous plans on the drawing board.