VT Damascus:  Yesterday, Turkey and the al Qaeda “franchise,” al Nusra began poison gas attacks on Shiite Syrian towns in and near the region chosen by them as a “Safe Zone” for refugees.  Through the day a battle ensued with Syrian Air Force jets bombing and strafing the chemical weapons brigades over what the United States and Turkey have informally deemed a “No Fly Zone”.

This is clear thus far, Turkey and the United States certainly consider al Qaeda a trustworthy working partner and key to their incursion into Turkey in order to form a “Safe Zone” even though Turkey has a long history acting as facilitator for chemical attacks against Syria, a fact well established.What is also clear is the use of chemical weapons by Turkey with full knowledge of the US Defense Department, and as Seymour Hersh reported in his book, The Red Line and the Rat Line in 2014:

Last May (2014), more than ten members of the al-Nusra Front were arrested in southern Turkey with what local police told the press were two kilograms of sarin. In a 130-page indictment the group was accused of attempting to purchase fuses, piping for the construction of mortars, and chemical precursors for sarin. Five of those arrested were freed after a brief detention.

The others, including the ringleader, Haytham Qassab, for whom the prosecutor requested a prison sentence of 25 years, were released pending trial. In the meantime the Turkish press has been rife with speculation that the Erdoğan administration has been covering up the extent of its involvement with the rebels.”

Hersh went on further to outline America’s knowledge, not only of Turkey’s involvement with al Qaeda/al Nusra but that of Saudi Arabia as well:

“The joint chiefs also knew that the Obama administration’s public claims that only the Syrian army had access to sarin were wrong. The American and British intelligence communities had been aware since the spring of 2013 that some rebel units in Syria were developing chemical weapons.

On 20 June analysts for the US Defense Intelligence Agency issued a highly classified five-page ‘talking points’ briefing for the DIA’s deputy director, David Shedd, which stated that al-Nusra maintained a sarin production cell: its programme, the paper said, was ‘the most advanced sarin plot since al-Qaida’s pre-9/11 effort’. (According to a Defense Department consultant, US intelligence has long known that al-Qaida experimented with chemical weapons, and has a video of one of its gas experiments with dogs.)

The DIA paper went on: ‘Previous IC [intelligence community] focus had been almost entirely on Syrian CW [chemical weapons] stockpiles; now we see ANF attempting to make its own CW … Al-Nusrah Front’s relative freedom of operation within Syria leads us to assess the group’s CW aspirations will be difficult to disrupt in the future.’ The paper drew on classified intelligence from numerous agencies: ‘Turkey and Saudi-based chemical facilitators,’ it said, ‘were attempting to obtain sarin precursors in bulk, tens of kilograms, likely for the anticipated large scale production effort in Syria.’ “

Turkey, along with Saudi Arabia and Qatar, as part of their new policy to fight ISIS terrorists and build a “No Fly Zone” inside Syria, is responsible for providing unspecified poison gas cylinders to their special operations troops operating with al Nusra inside Syria along with staging attacks over the Turkish border.

Medical teams are examining victims and soil samples are being collected.  The CIA backed Syrian Human Rights Observatory, based in London has been curiously silent about the attack.

The Turkish backed troops fired gas cylinders along with high explosive shells and missiles into two Shiite towns in Northern Aleppo, Al Zahra and Navil, which had been under siege for over two years.  The areas receiving most damage were the Mayer, Zahreh al-Qareh and Tamoureh districts of al-Zahra, where nearly a dozen gas cylinders hit.These towns have been used by Damascus based forces as a linchpin for operations against Takfiri terrorist groups currently being pushed back to their Turkish bases.

On May 1, 2015, American fighter bombers destroyed an underground chemical weapons facility in Raqaah, Syria.  Three Turkish officers were killed in the attack and two captured by Syrian Special Forces.  The names of the dead are Najim Al Dein Tourna, Jakri abdullah and Khoder Jaherzak.  The names of the captured officers were given to Turkey and the Crescent Cross as required by the Geneva Convention but Turkey has, thus far, made no efforts to effect their repatriation. These two join a bevy of Qatari, Saudi and Turkish military taken prisoner inside Syria.  From VT:

“A high ranking Turkish officer explained to interrogators that Turkey’s support of ISIS and their direct involvement in the use of chemical weapons is meant to give Turkey influence and leverage when Al Nusra and the Muslim Brotherhood enter Damascus.  The officer indicated that sarin and now chlorine gas attacks are unleashed against Syrian civilians while “Syrian Human Rights Observatory” is used to place blame on the Damascus government.”

The chemical weapons plant was in an underground complex beneath an athletic field just outside the walls of the historic city. 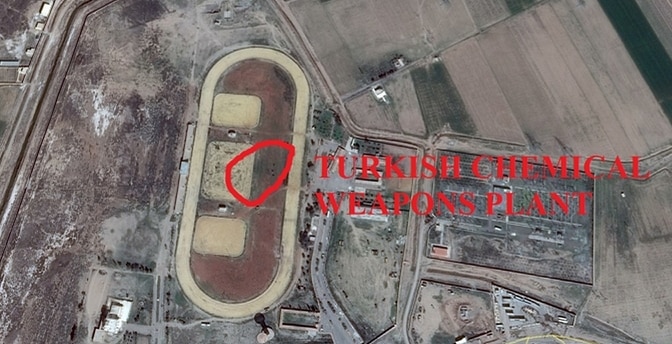 Syrian Human Rights Observatory acknowledged that there were 52 deaths in the attack on the underground facility but claimed all deaths were civilians, something repeated in an Al Jazeera broadcast.

With the stories of barrelbombs and chlorine gas, always attributed to Syrian Human Rights Observatory, filling the media, the real story, a long history of chemical warfare against Syrian towns by Turkish and Saudi backed terrorists, a story reported in detail by Seymour Hersh, one investigated thoroughly by former US Army Chemical Warfare Specialist Jeffrey Silverman from Tbilisi, Georgia, one investigated by Press TV correspondent Serena Shimm, there is nothing surprising about this week’s chemical attacks other than America’s involvement.

It was Serena Shimm, killed in a staged one car accident in Turkey in 2014, that broke the story of Turkey’s transiting chemical weapons from Georgia, confirming Jeffrey Silverman’s 2013 series of stories published in New Eastern Outlook in 2013 and 2014. With over 400 American observers just across the border inside Turkey, it is not unreasonable to assume that Turkey’s ethnic cleansing of Syrian Shiites using chemical weapons, as part of last week’s agreement with the US, is being done without full US knowledge and complicity.