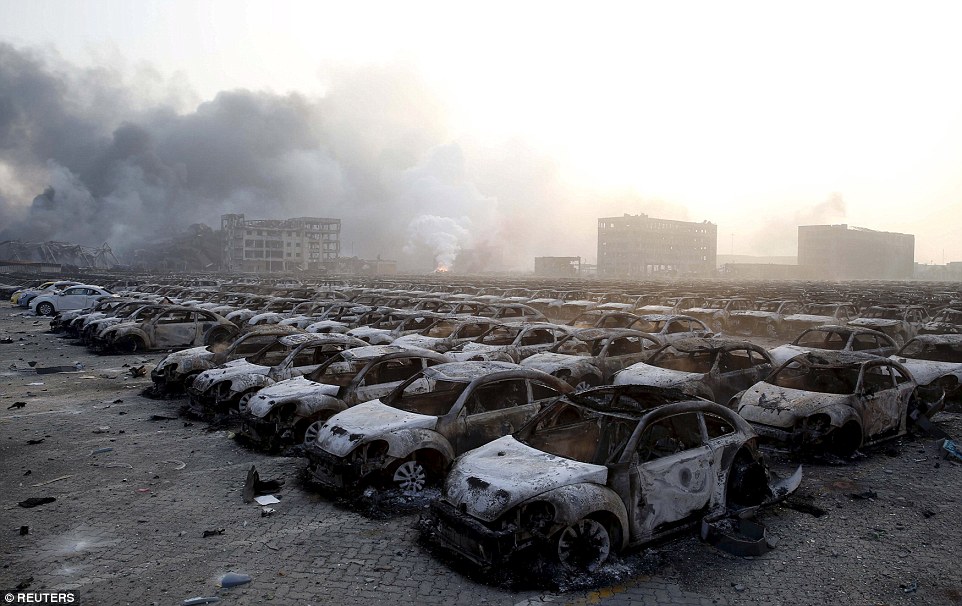 by Ian Greenhalgh with Jeff Smith

One of the key pieces of evidence that allowed the experts at VT to identify the aftermath of nuclear explosions in Tianjin was the presence of large numbers of cars that had been burned out in a manner which could not have been caused by any conventional fire, but rather, is the result of radiation.

In our article Confirmation – Tianjin Was Nuked we briefly covered the incineration of the radiators and cooling systems of the cars and mentioned that this was due to the presence of freon gas in the cooling systems and when stuck by the radiation of a nuclear blast, this Freon acted like the secondary core of a classic hydrogen bomb.

In this article, we give you the technical information to better understand what happens when a nuclear explosion irradiates a modern car. We believe that it is important to get this information into the public domain as it will arm people with the knowledge to be able to identify the use of nuclear weapons in the future and maybe this will make it harder for those that use them to get away with it.

How Freon is imploded in a car air conditioning system by a neutron bomb.

After a neutron and/or a classical fission bomb is detonated the expanding neutron/x-ray radiation field emitted from the device will eventually strike any object within its radiation field pattern. If any sealed container that is filled with a hydrogen-based fissionable fuel such as Freon or Propane is placed within close enough proximity of the blast it will act as a black body radiation case. This radiation case or what is called a Hohlraum in nuclear physics will act as a secondary fusion container compressing and fusing the internally confined hydrogen fuel and it will ignition it producing a low-level fusion reaction.

The car’s air conditioning system acts as a radiation case and the envelope of a secondary ignition system. If the metal casing of the cars cooling system is (acting as the pusher/tamper) made of heavy materials opaque to x-rays, and the remaining space within the radiation case (the hohlraum) is filled with light-weight materials transparent to x-rays; such as freon, as the primary fissions, large amounts of x-rays are radiated ahead of the blast and instantaneously fill the hohlraum with x-rays. Radiation trapped within the hohlraum rapidly reaches its equilibrium blackbody spectrum and turns the hohlraum into a hot plasma.

The radiation-driven thermalization insures that this plasma has very uniform pressure and temperature so that its effects on the casing are the same from all sides; the plasma re-radiates longer wavelength x-rays that are absorbed by the surface of the metal casing; the surface of the secondary (the pusher/tamper acting as the car’s radiator) is heated to the point where it vaporizes and material is ejected from it; the material ablated from the pusher/tamper causes by reaction produces a pressure which pushes the tamper inwards, imploding the freon to very high densities.

A crucial idea in the Teller-Ulam method of nuclear fusion is the use of a radiation-heated low-density plasma as a buffer to create very uniform driving conditions to compress the secondary equally and simultaneously from all sides. The role of the buffer (freon)is then played by thermalized blackbody radiation. The advantage of the low-density filling (Freon) gas is that it allows energy from the primary blast to be stored as plasma thermal energy, which may later be re-released to the secondary to drive an ablation process.

This is important as the primary (the neutron bomb) is a time-varying radiation source with a time dependence which is not optimum for adiabatic compression. Moreover, since the x-ray pulse from the primary is of relatively short duration, energy storage allows longer-sustained compression of the fusion fuel to a higher compression level.

A remarkable thing about the Teller-Ulam method is that the resulting compression mechanism is very simple and effective, even though it is based on a very complex radiation transport process. In order to prove that radiation-driven ablative compression can be used to compress a small amount of fusion fuel such as Freon gas in a car’s cooling system, some estimate of the ablation pressure is required.

Such an estimate is provided by the observation that, in the first approximation, the exploding boundary layer at the surface of the pusher is a plasma whose temperature is determined by the hohlraum temperature and whose density is equal to the pusher density.

To compress a deuterium based fuel to 300 times its solid density requires a pressure of 150 TPA (1500 megabars). If the pusher is made of heavy metal such as stainless steel, we find that the corresponding hohlraum temperature has to be only on the order of 0.4 keV. to achieve compression.

The hohlraum temperature needed to drive ablative compression is therefore on the order of 0.2 to 2 keV. This is lower than the maximum temperature of a fission explosion, which can, therefore, be used as the energy source for that purpose. Moreover, this temperature range is compatible with a hohlraum filling made of a low-density low-Z material such as freon.

Because of the intense neutron background resulting from the explosion of the primary weapon a fission/fusion chain reaction starts in the hohlraum as soon as it becomes critical. Hence, when the newly transformed thermonuclear fuel is imploded to its maximum density. It will then provide, in the form of x-rays, neutrons, and additional compression from within, a large amount of energy sufficient to insure that ignition of the Freon will start.

The heating of the fuel to thermonuclear ignition is achieved during compression by hydrodynamic conversion of kinetic energy into thermal energy. For instance, the concept relies on the formation of a hot spot in the center of the imploding fuel where the decelerating motion of the material is converted into heat.

If the temperature is high enough, the hot spot ignites and initiates a thermonuclear burn wave that propagates to the outer cold fuel layers. In the case of DF, This is what the Freon eventually turns into.

The hot spot ignition temperature is about 10 keV. To obtain such high central temperatures, the implosion has to be very symmetric and the time-dependence of the ablation pressure has to have a very precise profile in order for compression to be adiabatic. But in the other hydrodynamic mode, volume ignition, it is much less demanding. In effect, provided radiation flux is high and fast enough.

Since the number of neutrons is given by the yield, and the flux by reference, the compressed deuterium radius is equal to about 2.7 cm. In cylindrical geometry, this corresponds to a geometrical compression factor (30/2.7)2 ≈ 120, i.e., a compression of the freon gas to a density about 100 times higher than its normal density.

The minimum required yield of a primary weapon needed to ignite the hydrogen-based fuel is determined by the energy required to compress the secondary by a given factor. For compression factors of 300, i.e., ρD = 53 the adiabatic compression energies are about 3’000 MJ/kg, in total.

The typical energy content of a chemical explosive is 5 MJ/kg. Hence, the minimum radiation energy required to ignite the Freon is equivalent to the energy of about 0.6 kt of high explosives at a given distance of fewer than 1,000 meters distance. Assuming that the conversion of primary energy into hohlraum plasma energy is 10% or better.

This means that any small nuclear device greater than about 1kt in explosive power will produce enough radiation energy to ignite almost any hydrogen base gas such as freon, propane, butane, etc. that is stored in a proper high-density metal container or radiator system and can be split into H2 or deuterium fuel.