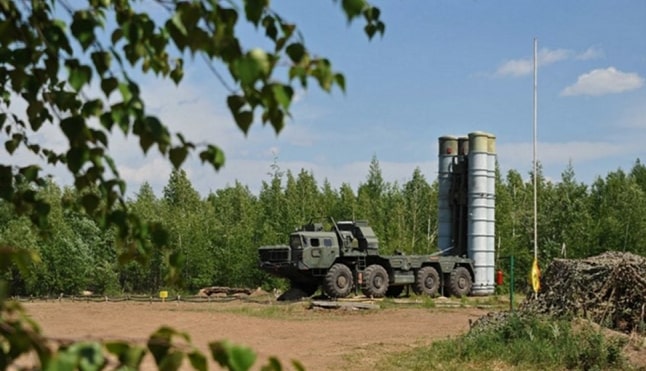 An S-400 “Triumf” antiaircraft missile system.
The Russian Air Force base in Latakia will be reinforced with S-400 SAM system, which will soon be deployed there, Russia’s Defense Minister Sergey Shoigu said on Wednesday.

“S-400 will be deployed on Khmeimim airbase in Syria,” Shoigu said at a Defense Ministry meeting.

Earlier on Tuesday, the Russian Su-24 was shot down by a Turkish F-16 fighter jet near the Turkish-Syrian border. One pilot died in the incident. The second one was rescued and brought to the Russian airbase in Latakia.

Moscow maintains the jet did not violate Turkey’s airspace. It ditched on Syria’s territory four kilometers from the border.

Shortly afterwards, the MoD announced three steps to be taken following the attack on the Russian Su-24 bomber, including providing aerial cover by fighter jets for every airstrike, boosting air defense by deploying guided missile cruisers off the Latakia coast, and suspending all military-to-military contacts with Turkey.

The S-400 is Russia’s most advanced anti-aircraft defense system. It is as an upgrade of the S-300 Growler family, designed and developed by Almaz Antei. The S-400 is employed to ensure air defense using long- and medium-range missiles that can hit aerial targets at ranges up to 400 kilometers.

The S-400 is capable of hitting tactical and strategic aircraft as well as ballistic and cruise missiles. The system includes a set of radars, missile launchers and command posts, and is operated solely by the Russian military.

Khmeimim airbase in Latakia, Syria, accommodates Russian Air Force squadrons of Su-27SM and Su-30 fighter jets, Su-34 and Su-24 tactical bombers, which are all taking part in airstrikes on Islamic State positions. The airbase is protected by state-of-the-art air defense systems and radars. Khmeimim also has a fully operational unit for maintaining fixed- and rotor-wing aircraft and providing logistical assistance to pilots.