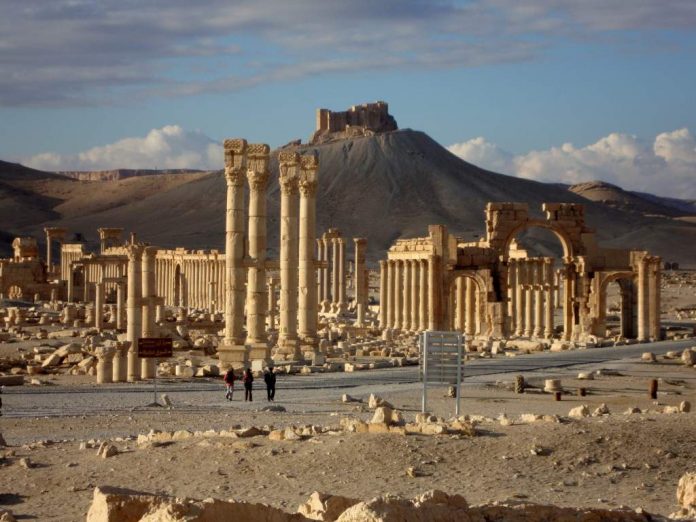 [ Note: There is no way we could have seen the change of events in the Syrian war a year ago, or that we would be involved like we have been through our follow up work. We never could have done this all at long distance, as getting eyeball to eyeball helps both sides get a better measure of each other.

That said, it makes me wonder what we might be writing for next year’s second post-CT conference retrospective. We hope the current trend will continue, but we have been around long enough to know that it can all go up in smoke with just a few bad moves…JD ]

What a difference a year can make since attending last December’s CT event in Syria when we were not even sure if it would be held. Who would have ever believed we would have seen the complete reversal of the military situation there beyond anyone’s imagination?

Russia was already in the bear trap that NATO and the EU had set up in Ukraine, with its currency getting hammered and international credit lines cut off. Kiev was doing its best to finish off the Donbass Republics while blaming it all on Moscow aggression.

A big move into Syria is the last thing anyone expected from Moscow…but we were wrong. We had gone past a rekindling of a new Cold War to a “warm war” with the Malaysian MH17 shoot down and the attempt to blame it on Russia with no proof whatsoever.

A year after that it would be a Russian tourist plane that was blown from the skies in Egypt in what we still feel was done by ISIL supporters using the jihadis as a convenient smokescreen. It all sounds like the script for a Hollywood thriller movie, but has all been too real, especially for the victims.

The Syrian Justice Ministry’s first international counter-terrorism conference attempt was originally planned for a late October date, but when everything was set it was postponed with a “maybe” rescheduling before year end, which seemed unlikely for the holiday season.

But it was rescheduled with a December 1 date, which found our four-man VT team at the opening session, after a 1 am arrival at the Dama Rose Hotel after long flights on a Thanksgiving holiday weekend.

I had gotten a firsthand look at the war carnage in June as one of the 35 election monitors brought in with just a two-week notice to counter the expected Western press claims of a rigged election.

My first location choice was going to Homs, a town that had seen intense battles in the city center, but had been recently liberated by the Syrian army pushing the jihadis to the city outskirts. While visiting Homs, my first surprise was seeing how upbeat the people were amid all the devastation.

The election was more a celebration for them that they, the Syrian people, Assad, and their Army had not been beaten, and they wanted to rub that in the faces of the Western and Gulf State terror sponsors by re-electing Assad with a huge margin, which they did.

But it seems someone did not like our VT team being there, as three of us were poisoned, the old Cold War tactic of selectively getting E-coli while staying in a 5-star government hotel under heavy security. Only Mike Harris escaped, but Gordon Duff, Col. Hanke and I were sick for a couple of months afterward.

But the highlight of the trip was Gordon’s keynote address that shocked everyone, as he presented a completely new perspective on the war not being about religion, or geopolitics really.

What Duff said then still reverberates today. One year ago, while sitting between Colonel Jim Hanke, former G2 of Third Army in NATO, and the Syrian Minister of Justice, Gordon made his case for how ISIS was an international criminal organization built and managed by national intelligence agencies.

Everyone was involved. There were no politics, no religious struggle, no ideology for the real powers behind ISIL. That was all saved for the fake Muslim footsoldier jihadis. It was all theft “on a scale never before seen.”

The crushing of Syria was being done purely for financial gain, where even heads of state were just lieutenants in the process. The lootings involved energy market manipulations, the theft of Syria’s oil, which has finally gotten the attention it deserved regarding the Turkey connection.

A recent Duff article describes how Turkey had an earlier taste of stolen oil marketing during the Iraq War, where Kurdish lite sweet crude was pipelined to Syria’s oil port at Ceyhan, and where billions of dollars of Iraq’s oil disappeared into the offshore bank accounts of the real terror cabal.

“The game involved playing Baghdad against Erbil and bleeding off oil revenues from the Kirkuk Oil Fields, largest oil reserves in the world, as they moved by pipeline through Kurdistan and into Turkey.

There they were off-loaded onto American tankers in the Mediterranean, where these huge ships, largest in the world, were filled with oil; but it was never recorded and the oil never paid for.

During the Bush era “War on Terror,” up to 40% of Iraqi crude oil, up to half of what was sent through Turkey on the Baku-Ceyhan pipeline was stolen. Our investigations between 2005-7, which included meetings between Gordon Duff and Iraqi and Kurdish leaders in both Erbil and Tikrit, covered this issue.”

So you see, Gordon was not making up his international criminal cabal story. Printing these types of disclosures does come with an element of risk, as media people have been killed for a lot less. But that would also risk getting more publicity for a crime that they have so far gotten away with so far, and want to continue.

Gordon’s “it’s all about organized crime looting entire countries” talk began a continuing dialogue with Syrian officials that continued after we got home, exploring ideas on how best to reverse the horrible situation they were in.

We were trying to get them better media coverage, but they were hesitant to release information with which we could get some attention, such as their growing international jihadi POW inventory, comprising terrorists from over sixty countries at the time.

After several months, we finally began to get the photos we needed, and video confirmation of not only Turkish officers captured in uniform, but Qatari and Saudi ones. Those countries had been getting a free ride on their involvement up to that point.

The Syrians’ initial focus was getting an international anti-terrorism coalition going, a complicated and slow process to put together with large numbers of people, and we felt the clock was ticking on their running out of staying power and losing the war of attrition that their tormentors had bet on winning.

We suggested that a much simpler counter offensive to gain international attention for the mass looting of Syrian wealth was to sue the non-state parties involved, via the felony laws against supporting or funding terrorism. The theft of Syrian oil, factories and ancient artifacts certainly qualified Syria to bring charges.

The silver bullet was that the laws covered financially recapturing what had been stolen, and Syria was going to be facing a huge rebuilding effort when the war ends, where the same international crime gangsters will change suits and try buy up much of Syria at ten cents on the dollar. It would be much better to have the thieves’ assets confiscated to pay for as much of the rebuilding as possible.

Turkey’s recent SU-24 shoot down has blown the doors off some of these looting stories. Because of the close business relations with Turkey, especially the Southstream pipeline, Putin had been hesitant to rub Erdogan’s and his son’s faces in the stolen oil scandal.

Destroying ISIL was the main focus before the shootdown. But the obvious aerial bushwhacking of the SU-24 used up all of Erdogan’s diplomatic politeness credit with Putin, so he has put the oil-looting scandal onto the international stage.

Now it is Erdogan’s turn to pay and bleed for a while. While he huffs and puffs with his press statements, there have been no Turkish strikes inside Syria, and the huge number of Greek airspace incursions which became public also stopped. It is now public that Turkish military and Special Ops people have been working inside Syria with their Turkman battalion.

From Gordon Duff’s latest NEO article, The Madness of Erdogan, we have a strong hint as to why Obama jumped so quickly to back Turkey on the shoot down… because the US has CIA hit teams there hunting Iranian and Russian advisors, and, as we were shown last week, Russian pilots.

This situation could get much worse before it gets better. Russia’s payback for the pilots has been the smart move of piling more military resources into Syria to protect what they have there.

The Western coalition just got trumped by its own stupidity. But Erdogan might push the envelope more by sacrificing one of his F-16s in a last ditch attempt to bring NATO in to save face.

But we know at least some NATO members are on to Erdogan’s game. A growing number of EU countries are not going to get railroaded by the manipulative oil-smuggling president and factory looter.

December will show us if the final assault is launched on the jihadis in Aleppo, where we expect any surviving jihadis will run to Turkey in the west and Saudi Arabia in the East.

When the first Viennese-sponsored meeting comes for the Assad and the Syrian opposition in January, we could be looking at a different military situation. If it is grim for the Western terror sponsors, I fear they are capable of strategizing that they have nothing to lose by pushing the envelope more, with a major false flag attack.

Stopping that might take something on the scale of stopping the first US air attack on Syria, and I am not sure Americans are up to that again. As was done with the Iranian nuclear weapons program hoax, we must continue to do the same by exposing the Syrian war fraud, and that is happening. If you don’t believe me, just ask Erdogan.