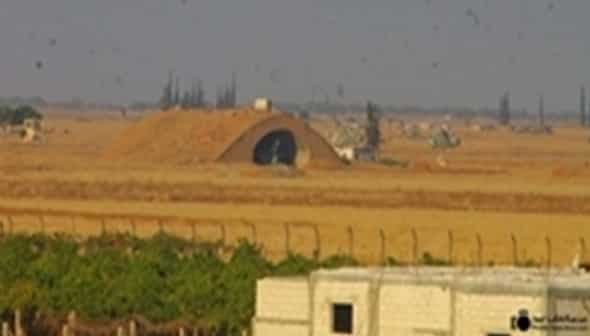 TEHRAN (FNA)- The Syrian government issued permission to the Russian air force to use two airports in Homs province – in addition to Khmeimim airbase in Lattakia – to attack terrorists across the country.

According to the Kommersant newspaper, the Russian army now plans to start deploying a large number of forces and air defense systems in Shairat and Tias airports in Homs province.

According to informed sources in the Russian defense ministry, the country’s pilots will use the two airports for fueling and repairs.

The sources were quoted as saying that “Tias and Shairat airports are much better than Lattakia’s Khmeimim airbase for providing logistics and air cover to the Syrian ground forces”.

Russia began counterterrorism operations in Syria on September 30, after Moscow received an official request from Syrian President Bashar al-Assad. Initially, the military operation started conducted by a task force of more than 50 aircraft and helicopters, including the Sukhoi Su-34 and Su-24M bombers, Su-25 attack aircraft, Su-30SM fighters and Mil Mi-8 and Mi-24 helicopters. Last week, a decision was made to bolster the strike group with 37 new planes, including long-range aircraft carrying out sorties from Russian airfields.

Probably the most impressive airstrikes were delivered by Russian strategic bombers, which used long-range strategic cruise missiles with conventional warheads, together with huge payloads of bombs dropped on ISIL installations on the Syrian territory.

TEHRAN (FNA)- The Syrian army and its allies won back the strategic Palmyra-Homs Highway after fierce clashes with the ISIL terrorists early on Monday.

Field sources said the Syrian forces and their allies took control of the Palmyra-Homs Highway after seizing the villages of al-Baiyarat and Marhatten in the Western countryside of Palmyra over the past weekend.

With Al-Baiyarat, Marhatten, and the Palmyra-Homs Highway under their control, the Syrian Forces and their allies are now positioned 4km away from the Western walls of Palmyra; this is the closest the pro-government forces have been to the gates of this ancient city since July.

Unfortunately for the Syrian Armed Forces and their allies, the route to the Western gates of Palmyra will not be easy, as the Qassoun Mountains (Jabal Qassoun) are deeply entrenched with ISIL terrorists that are overlooking the entire Western countryside of the city.

Sources said on Sunday that a unit of more than 60 Russian Marines arrived in the Homs province’s Eastern part in order to advise and overlook the Syrian Army’s counter-offensive against the ISIL terrorists in Western side of the ancient city of Palmyra.

TEHRAN (FNA)- The Syrian Army announced on Monday that its forces have intensified their attacks on the ISIL and al-Nusra Front in the Southern province of Dara’a and Sweida, inflicting large casualties on the terrorists in the first wave of attacks.

The military sources said that the Syria army, alongside the National Defense Forces (NDF), have inflicted heavy losses on the al-Qaeda-affiliated Nusra Front in the Northern part of the National Hospital in Dara’a al-Mahatta neighborhood.

“Scores of militants were killed or wounded by the Syrian soldiers in Sheikh Meskeen in the Northern part of Dara’a city,” the sources went on to say.

The Syrian government forces also on Monday stormed the ISIL centers in the Southwest part of Oshaiheb Hill in the Syrian desert (Badiya) in Sweida,

In the north eastern countryside of Sweida, an army unit targeted ISIS terrorists to the south-west of Oshaiheb Hill in the Syrian Desert (Badiya) inflicting heavy losses in personnel and killed or wounded dozens of them.

The army also thwarted the ISIL terrorists’ attempts to infiltrate into the residential areas in the Badiya in the Northeastern countryside of Sweida and prevented them from smuggling arms and ammunition through the vast Badiya which is opened to the Jordanian and Iraqi borders.

Sources said earlier today that the Syrian Army troops repelled a fresh round of attacks conducted by the militant groups on their positions near Jediyeh town some 65 kilometers Northwest of Dara’a city.

The sources said that the terrorist groups stormed the town from different directions, but the Syrian army defeated them and killed a number of terrorists while others fled away leaving the bodies of their dead members.

Field commanders of army units asserted that this was the fifth attack that targeted the town during 2015, noting that the army always achieved victory and defended the town which is the first defense line of the area and the international highway.

Field commanders said that the Israeli occupation hands were clear in this terrorist attack since terrorists tried to infiltrate into the government forces’ defense lines from the axis of al-Jdeireh , Salmeen-Zamreen axis and Salmeen-Inkhel axis to the surroundings of the town under fire coverage from al-Mal hill and Tal al-Harra region eight kilometers far from the town where al-Nusra terrorists are fortified and work with direct coordination of the Israeli forces.

TEHRAN (FNA)- Syrian fighter jets bombed terrorists’ positions in the province of Aleppo amid reports of rocket attacks on militants’ supply routes in the Northern Province on Monday.

The Syrian warplanes bombed a terrorists’ field hospital between the towns of Lairmoun and Kafr Hamra.

The Syrian army also fired rockets at terrorists’ supply routes in the Northeast of Lairmoun, killing and injuring a large group of Takfiris.

The Syrian Armed Forces and Hezbollah on Monday stormed the militants’ defense lines in the Southern part of Aleppo province and seized a new village in just two hours near the strategic town of Tal al-‘Eis.

The Syrian Army’s 4th Mechanized Division in Tal Al-‘Eiss, the Syrian Armed Forces, Hezbollah, and the Iraqi paramilitaries imposed full control over the village of Khalsah after a series of intense firefights with the militants of Ahrar Al-Sham, Al-Nusra Front, Harakat Nouriddeen Al-Zinki and Liwaa Suqour Al-Sham this morning.

With Khalsah officially under the Syrian Armed Forces control, the terrorist groups are now one village away from having all of their recent gains in Southern Aleppo reversed by the pro-government forces; this means that if Burnah is captured, the militants will have lost every village they seized two weeks ago.

Currently, the Syrian army’s 4th Mechanized Division and Hezbollah have seized 70 percent of Burnah from Ahrar Al-Sham and Liwaa Suqour Al-Sham, leaving only the Western sector of the village under the latter’s control.

Earlier, military sources said the Syrian Army and popular forces are advancing on militant positions in the Southern part of Aleppo province and have thus far forced the terrorist groups to withdraw forces from vast territories.

The Syrian army and its allies’ operation forced the militant groups to retreat from al-Hamra village, the sources said

“Tens of the militant groups were killed or wounded in the army’s operation, and the remaining of the terrorists fled the battle zone to evade further casualties,” the sources added.

Earlier reports said that the Syrian army captured two more villages in Aleppo province amid reports of the arrival of Syrian reinforcements to Southern Aleppo.

The Syrian Army’s 43rd, 82nd, and 155th Brigades of the 4th Mechanized Division, backed by Hezbollah, Harakat Al-Nujaba (Iraqi paramilitary), and the National Defense Forces (NDF) of Aleppo city, retook full control of the villages of Zeitan and Al-Qala’jiyah near the strategic city of Khan Touman after a series of firefights with the terrorists from the al-Qaeda affiliated al-Nusra Front, Harakat Nouriddeen Al-Zinki, and Harakat Ahrar Al-Sham.

The villages of Zeitan and Al-Qala’jiyaj are situated to the South of Khan Touman and approximately 1km East of the strategic Aleppo-Damascus Highway.