Home Veterans Before we kill each other over Religion, Take this Quiz

Music is the universal language of mankind, why can’t religion play the same role?

Personally I never imagined that humans in the 21st century will be that obsessed with religion. And to be exact, the obsession I’m talking about is not like the obsession- for example – with music which makes you a good listener and perhaps a not so bad player of a musical instrument. When you get into the world of music you become a different human being, more sensitive, more perceptive of abstract beauty and capable of acquiring positive energy and positive frame of mind.

The religious obsession I’m talking about is not like delving into the religious teachings and discerning the uplifting values within the core of almost every faith on earth. Unfortunately most people don’t dig deep for that core; rather they are more preoccupied with trivial appearances.

People are now obsessed with BRANDING each other by their religion. It seems it doesn’t matter anymore who you are, what you do and how good you do it. It is vital now to know what kind of religion you adhere to.

People everywhere – it doesn’t matter if you were in Malaysia or the Netherlands, if you were in America or Pakistan – began to discriminate against the religious minority groups.

Muslims attack churches and prosecute Christian minorities in Malaysia, Pakistan and Egypt. Hindu extremists are often engaged in acts of violence against the Muslim and Sikh minorities in India. The spiritual and meditative practice of Hinduism’s yoga is considered incompatible with the teachings of Jesus by some Christian leaders in America. Muslim outfits and mosques are not tolerated by Christians in Europe. Islamophobia is sweeping across America after 9/11 as people there began to link Islam with terrorism.

Ironically, the followers of every creed or faith think they got GOD on their side. People on every side believe they are the only ones who have a monopoly of the truth and righteousness. Every religion members believe they are the true believers and the rest are just infidels who somehow got lost on the way to heaven. Meanwhile heaven must be bitterly giggling at this earthly farcical comedy that portrays GOD as pathetically taking sides.

Religion is supposed to be a special relationship with God, it’s extremely private, and it is an exclusive affair. We don’t allow others to meddle in our private life let alone our religious beliefs.

It is hard to imagine that after thousands of years of man’s pursuit of divinity we still worship not one GOD.  Human knowledge and experience have critically evolved throughout history. We don’t eat or read or think or even listen to music like in ancient times. Music has dramatically evoloved from folk – prehistoric- music to large scale symphonies. But we still practice religion like in ancient times worshiping multiple deities with different names.

Why religious thinking failed to have come the long way like other human practices and spheres. And i`m not referring to creation vs evolution here but to our perspective and interpretation of religion. Why we managed to grow out of the myths of the past but still insist to indoctrinate our children with the depraved bits in our religions- and miss out on the good ones- that add to their intolerance of other faith believers.

If we dismissed all the discriminative parts in almost every creed on earth we’ll be surprised to find that we are talking about one message and one GOD. And only through this dismissal of – outdated and depraved bits- can religion catch on the cycle of cultural evolution.

If humans kept on clinging to their religious prejudices they will likely contribute to the degeneration of the realm of one of the most sublime human endeavors, namely, faith.

If we knew better, if only we knew more about each other’s religions maybe we would have come to respect and recognize that we have a lot more to share than to denounce and hate each other for.

People are awash in a sea of faith, but their knowledge about religious faiths and religious history often runs as shallow as their commitment to religion runs deep. This was the end result of the recent survey by the Pew Research Center’s Forum on Religion & Public Life.

If we had the chance to know more and better, if we let go of our prejudices of the past, we would arrive at the threshold of every religion and know the place for the first time. We would discover that the diversity that exists among the various religious traditions is enormously enriching. In this context we could easily come to appreciate the sanctity of the Jewish Sabbath, the Muslim fasting in the month of Ramadan, the meditation and compassion of Hinduism and Buddhism. We’d be deeply touched and moved by the sacrifice of Jesus on the cross.

Music is the universal language of mankind, why can’t religion play the same role?

Let’s detach religion from the hate rhetoric and dirty politics. Let’s strip away the false appearances. Let’s liberate religion from the bounds of ignorance and extremism. Let’s delve into an era of enlightenment and coexistence amongst believers of different faiths and beliefs. Let’s agree that we could practice different religious rituals but that we glorify the same GOD.

Religion should be like music acting as a subtle form of communication which, at its best, transcends the limitations of language and ethnicity in unifying the people.

Let’s not lose hope.  Let’s call off the countdown to the apocalyptic Armageddon. let us learn more about other religions. May be when you discover how little you really know, you would consider unsubscribing to the annihilation of life on earth in the name of religion. And maybe then we could find true meaning and refuge in one of the last sayings of Jesus upon the cross … “Father forgive them, for they know not what they do”

How much do you know about religion?

And how do you compare with the average American? Here’s your chance to find out.

Take our short, 15-question quiz, and see how you do in comparison with 3,412 randomly sampled adults who were asked these and other questions in the U.S. Religious Knowledge Survey. This national poll was conducted by the Pew Research Center’s Forum on Religion & Public Life from May 19 through June 6, 2010, on landlines and cell phones, in English and Spanish. 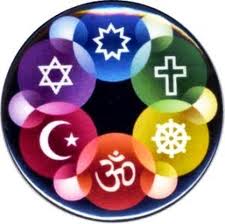 When you finish the quiz, you will be able to compare your knowledge of religion with participants in the national telephone poll. You can see how you compare with the overall population as well as with people of various religious traditions, people who attend worship services frequently or less often, men and women, and college graduates as well as those who did not attend college.

For a full analysis of the findings of the U.S. Religious Knowledge Survey, read the full report.

Your responses on the quiz do NOT affect the U.S. Religious Knowledge Survey’s results.