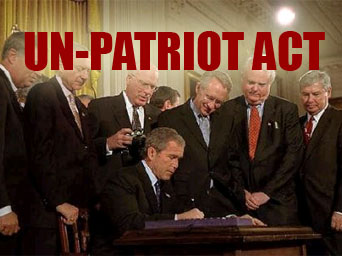 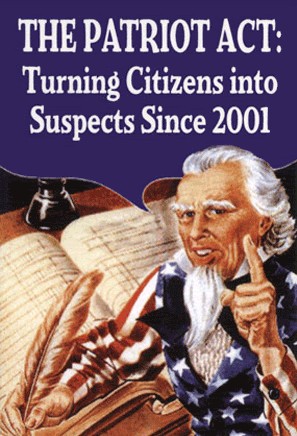 Americans NOT Frightened Enough by the Un-Patriot Act

Many Americans think they understand the dangers of the Patriot Act, which Congress has vowed to extend 4 more years in a vote later this week. Trust me when I say, Americans are not nearly frightened enough.

Ever wonder why the truth about 9/11 never got exposed? Why Americans don’t have a clue about leadership fraud surrounding the War on Terror? Why Americans don’t know if the 9/11 investigation was really successful? Why the Iraqi Peace Option draws a blank? Somebody has known the whereabouts of Osama bin Laden— or his grave—for the past 10 years. But nobody’s talking to the people.

In significant part, that’s because of the Patriot Act— a law that equates free speech with sedition. It’s got a big agenda, with 7,000 pages of Machiavellian code designed to interrupt individual questioning of government policy. In this brave new world, free speech under the Bill of Rights effectively has been declared a threat to government controls for maintaining stability. And the Patriot Act has become the premiere weapon to attack whistle blowers and dissidents who challenge the comfort of political leaders hiding inconvenient truths from the public. It’s all the rage on Capitol Hill, as leaders strive to score TV ratings, while demogauging their “outstanding leadership performance” on everything from national security to environmental policy.

But wait—Congress assures us the Patriot Act only targets foreigners, who come to our shores seeking to destroy our way of life through violent, criminal acts. Good, law abiding Americans have nothing to fear. The Patriot Act restricts its powers of “roving wiretaps” and warrantless searches to international communications among “bad guys.” Congress has sworn, with hand on heart, it’s only purpose is breaking down terrorist cells and hunting out “lone wolf” mad men.

That’s what they told you, right? And you believed them? You trust the government. Well, that was your first mistake. With regards to the Patriot Act, it’s a fatal one. Would the government lie to you? You betcha! And they have.

The Patriot Act reaches far beyond terrorism prevention. In my home state of Maryland, State Police invoked the Patriot Act to run surveillance on the Chesapeake Climate Action Network dedicated to wind power, recycling and protection of the Chesapeake Bay. They infiltrated the DC Anti War Network, suggesting the group might be a front for “white supremacists,” and Amnesty International, claiming to investigate “civil rights abuses.” Opponents of the death penalty also got targeted (in case they got violent).

Bottom line: truth tellers who give Americans too much insight on any number of issues are vulnerable to a vast arsenal of judicial weapons typically associated with China or Mynamar. In the Patriot Act, the government has created a powerful tool to hunt out free thinking on the left or right. It doesn’t discriminate. Anyone who opposes government policy is at risk

How do I know all this? Because I was the second non-Arab American ever indicted on the Patriot Act. My arrest defied all expectations about the law. I was no terrorist plotting to explode the Washington Monument. Quite the opposite, I had worked in anti-terrorism for almost a decade, covering Iraq and Libya, Yemen, Egypt and Malaysia at the United Nations. At the instruction of my CIA handler, I had delivered advance warnings about the 9/11 attack to the private staff of Attorney General John Ashcroft and the Office of Counter-Terrorism in August, 2001. FBI wire taps prove that I carried details of a comprehensive peace framework with Iraq up and down the hallowed corridors of Capitol Hill for months before the invasion, arguing that War was totally unnecessary.

I delivered those papers to Democrats and Republicans alike; to my own second cousin, White House Chief of Staff Andrew Card; and to Secretary of State Colin Powell, who lived next door to my CIA handler. Gratis of the Patriot Act, we had the manila envelope and my hand written notes to Secretary Powell, dated a week before his infamous speech at the United Nations. My papers argued that no WMDs would be found inside Iraq, and that the peace framework could achieve all U.S. objectives without firing a shot.

In short, I was an Asset who loudly opposed War with Iraq, and made every effort to correct the mistakes in assumptions on Capitol Hill.

Then I did the unthinkable. I phoned the offices of Senator Trent Lott and Senator John McCain, requesting to testify before a brand new, blue ribbon Commission investigating Pre-War Intelligence. Proud and confident of my efforts, I had no idea Congress was planning to blame “bad intelligence” for the unpopular War.

Over night I became Public Enemy Number One on Capitol Hill.

Thirty days later I awoke to hear FBI agents pounding on my door. My nightmare on the Patriot Act lasted 5 years— Four years after my arrest, the Court granted me one morning of evidentiary testimony by two supremely credible witnesses. Parke Godfrey verified my 9/11 warnings under oath. Otherwise, I never got my day in Court.

If you care about America and the traditions of freedom, whether you’re progressive or conservative, you should be angry about this law.

First come the warrantless searches and FBI tracking surveillance. My work in anti-terrorism gave me no protection. I got my first warrantless search after meeting an undercover FBI agent to discuss my support for free elections in Iraq and my opposition to torture and sexual humiliation of Iraqi detainees. (Sorry guys, body wires don’t lie.)

If truth tellers don’t get the message to shut their mouths, the Justice Department ratchets up the pressure. Defendants face secret charges, secret evidence and secret grand jury testimony. Throughout five years of indictment, my attorneys and I never got to read a single FBI interview or grand jury statement. Under the Patriot Act, the whistleblower/defendant has no right to know who has accused him or her of what criminal activities, or the dates of the alleged offenses, or what laws got broken.

Of course, I was able to piece together my activities. I knew that “sometime in October, 2001” an Iraqi diplomat gave me the English translation of a book on depleted uranium, which showed how cancer rates and birth defects had spiked in Iraqi children.

And I was quite certain that on October 14, 1999, an Iraqi diplomat asked me how to channel major financial contributions to the Presidential Campaign of George Bush and Dick Cheney. The Justice Department got the date from me, since I reported my conversation immediately to my Defense Intelligence handler, Paul Hoven.

It’s unlikely the grand jury knew that, since the Justice Department has the prerogative to keep a grand jury in the dark. In this brave new world, a grand jury can be compelled to consider indictments carrying 10 years or more in prison, without the right to review evidence, or otherwise determine whether an individual’s actions rise to the level of criminal activity at all.

Scared yet? Once you get to trial, the situation gets much worse. The Patriot Act declares that a prosecutor has no obligation to show evidence of criminal activity to a jury at all. And the Defense can be denied the right to argue a rebuttal to those secret charges, because it requires speculation that might mislead the jury—or might expose issues that the government considers, well, secret. After all that a Judge can instruct a jury that the prosecution regards the secret evidence as sufficient to merit conviction on the secret charges. The Jury can be barred from considering the lack of evidence in weighing whether to convict.

Think I’m exaggerating? You would be wrong. That’s what happened to me. All of it—with one major glitch. All of this presumes the whistle blower’s lucky enough to get a trial. I was denied mine, though I fought vigorously for my rights. Instead, citing the Patriot Act, I got thrown in prison on a Texas military base without so much as a hearing—and threatened with indefinite detention and forcible drugging, to boot.

Americans are not nearly afraid enough.

Neither is Congress. As of this week, members of Congress should be very afraid. Anyone who votes to extend the Patriot Act should expect to pack their bags in 2012. They will be targeted for defeat. Above all, the words “freedom” and “Constitution” will never appear in their campaigns without suffering extreme public scorn—never, ever again.

About the Author:  Susan Lindauer is the author of Extreme Prejudice: The Terrifying Story of the Patriot Act and the Cover Ups of 9/11 and Iraq, which reveals details of her CIA team’s 9/11 warnings and a comprehensive peace option with Iraq.