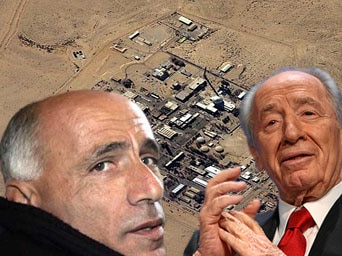 Milchan met with the authors, Meir Doron and Joseph Gelman, answered their questions, corrected their mistakes and quoted Peres as stating, “I am the one who recruited him.”

In the 1970’s, Peres was Minister of Defense when he recruited Milchan as an agent for Lakam, a ‘secret’ unit in Israel’s defense ministry that purchased technological parts and materials for Israel’s WMD program.

“Since its founding in the mid-1950’s, the agency was headed by Benjamin Blumberg…Blumberg was Milchan’s friend, and used him (as well as other Israeli businessmen) to set up straw companies around the world, and to open secret bank accounts for financing the nuclear plant in Dimona and other Israeli security industries.

“Lakam was in effect an intelligence unit dealing with technological and scientific espionage, and served as a kind of ‘theft contractor’ for the Israeli security industry…For years, Milchan operated in secret, yet in the mid-1980’s U.S. customs uncovered an attempt to smuggle ‘switches’ – equipment that can be used both for medical purposes and for nuclear weapons manufacture – by the California-based Milco company, owned by Milchan…The FBI began an investigation into Milchan’s affairs, yet he has never been charged.

“According to the book, right after the ‘switches’ fiasco Milchan called his friend Peres, then prime minister, and asked for his help in dealing with the Ronald Reagan administration. Milchan is quoted in the book as saying he never received money for his services, and that everything he did was for the state of Israel.” [1]

Peres and Botha also signed a broad-ranging agreement governing military ties between the two countries that included a clause declaring that “the very existence of this agreement” was to remain secret.

Polakow-Suransky also writes that Israeli officials “formally offered to sell South Africa some of the nuclear-capable Jericho missiles in its arsenal.”

On 31 March 1975, a meeting attended by South African military chief of staff, Lieutenant General RF Armstrong, wrote a “top secret” memo laying out the benefits to South Africa in obtaining the Jericho missiles if they were fitted with nuclear weapons.

On 4 June 1975, Peres and Botha met in Zurich and by then, the Jericho project had been renamed Chalet.

Botha did not go ahead with the deal because of the cost and the fact that final approval was dependent on Israel’s prime minister.

South Africa did build its own nuclear bombs and also provided much of the yellow-cake uranium that Israel required to develop its nuclear arsenal.

The documents also confirm that former South African naval commander, Dieter Gerhardt admitted there was an agreement between Israel and South Africa called Chalet that involved an offer by Israel to arm eight Jericho missiles with “special warheads” understood as atomic bombs.

“Some weeks before Peres made his offer of nuclear warheads to Botha, the two defence ministers signed a covert agreement governing the military alliance known as Secment. It was so secret that it included a denial of its own existence: ‘It is hereby expressly agreed that the very existence of this agreement…shall be secret and shall not be disclosed by either party.’” [Ibid]

Dr. Avner Cohen, is an Israeli-born philosopher, historical researcher and a leading expert in Israel’s nuclear policy of deception, which is spun as ‘Ambiguity.’

Cohen’s latest release is “The Worst-Kept Secret: Israel’s Bargain with the Bomb” and in a interview with Haaretz, Cohen spoke about a late-1969 meeting between Golda Meir and Nixon:

“The United States and most of the Western world agreed to accept Israel’s special nuclear status. In other words, Israel did not join the Non-Proliferation Treaty, but it received special status, and pressure was not exerted on it with regard to this topic. Ambiguity is the Israeli-American policy. Without the West’s agreement, there would be no ambiguity.

“The bitter irony is that right now, ambiguity serves the interests of Israel’s rival in the Middle East. Iran is creating its own version of ambiguity: not the concealment of its project, but rather ambiguity with regard to the distinction separating possession and non-possession of nuclear weapons. It reiterates that it has no intention of building a bomb, but that it has the right to enrich uranium, and even come close to developing [nuclear] weapons – while still remaining true to the nuclear Non-Proliferation Treaty. It is straddling the line, and in my opinion, Iran wants to, and can, remain for some time with the status of a state that might or might not have the bomb. Iran is a state of ambiguity.” [3]

On 2 October 2009, The Washington Times reported that Obama agreed to keep Israel’s nukes ‘secret’ and reaffirmed a 4-decade-old understanding that has allowed Israel to keep a nuclear arsenal without opening it to international inspections.” [4]

Under the understanding, the U.S. has not pressured Israel to disclose its nuclear weapons or to sign the nuclear Non-Proliferation Treaty, which would require Israel to give up its estimated several hundred nuclear bombs.

This nuclear deception was reached at a summit between President Nixon and Israeli Prime Minister Golda Meir on 25 September 1969 with “the United States passively accepting Israel’s nuclear weapons status as long as Israel does not unveil publicly its capability or test a weapon.” [Ibid]

During my 2005 interviews with Mordechai Vanunu he told me:

“Kennedy insisted on an open internal inspection. He wrote letters demanding that Ben Guirion open up the Dimona for inspection. The French were responsible for the actual building of the Dimona. The Germans gave the money; they were feeling guilty for the Holocaust, and tried to pay their way out. Everything inside was written in French, when I was there, almost twenty years ago. Back then, the Dimona descended seven floors underground.

“In 1955, Perez and Guirion met with the French to agree they would get a nuclear reactor if they fought against Egypt to control the Sinai and Suez Canal. That was the war of 1956. Eisenhower demanded that Israel leave the Sinai, but the reactor plant deal continued on.

“When Johnson became president, he made an agreement with Israel that two senators would come every year to inspect. Before the senators would visit, the Israelis would build a wall to block the underground elevators and stairways. From 1963 to ’69, the senators came, but they never knew about the wall that hid the rest of the Dimona from them. Nixon stopped the inspections and agreed to ignore the situation. As a result, Israel increased production. In 1986, there were over two hundred bombs. Today, they may have enough plutonium for ten bombs a year.” [5]

When President Obama took office, this muckraker began phoning, faxing and emailing him and Secretary of State Clinton regarding the fact that Israel continues to deny Vanunu the right to leave the state ever since he emerged from a tomb sized windowless cell on 21 April 2004, after 18 years in jail for telling the world the truth and providing the photographic proof that Israel had manufactured upwards of 200 nuclear warheads by 1986, in the Dimona’s seven-story underground nuclear facility.

I have also been requesting a statement from this Administration vis-à-vis the fact that Israel’s very statehood was established contingent upon their upholding the UN Universal Declaration of Human Rights.

As a Member State of the Declaration of Human Rights, America is obligated to hold all Member States accountable when they fail to honor it.

I have relentlessly reminded my government that Article 13-2 guarantees Palestinian refugees and Vanunu, “the right to leave any country, including his own, and to return to his country.”

Both Mr. Edgar Vasques, State Department Media Affairs Officer and Ms. Nicole Thompson, Press Relations Officer for Clinton, have been gracious to me and Ms. Thompson even raised my hopes when she told me “it is not impossible to receive an answer from the Secretary of State.”

But on 15 January 2011, I realized why I will never receive a statement from this Administration via The New York Times which reported:

“Over the past two years, according to intelligence and military experts familiar with its operations, Dimona has taken on a new, equally secret role — as a critical testing ground in a joint American and Israeli effort to undermine Iran’s efforts to make a bomb of its own. Behind Dimona’s barbed wire, the experts say, Israel has spun nuclear centrifuges virtually identical to Iran’s at Natanz, where Iranian scientists are struggling to enrich uranium. They say Dimona tested the effectiveness of the Stuxnet computer worm, a destructive program that appears to have wiped out roughly a fifth of Iran’s nuclear centrifuges and helped delay, though not destroy, Tehran’s ability to make its first nuclear arms.

“How and when Israel obtained this kind of first-generation centrifuge remains unclear, whether from Europe, or the Khan network, or by other means. But nuclear experts agree that Dimona came to hold row upon row of spinning centrifuges…another clue involves the United States…an expert added that Israel worked in collaboration with the United States in targeting Iran, but that Washington was eager for ‘plausible deniability.’” [6]

There’s no denying that unless nuclear weapons are abolished and all people are free and equal; the world will remain in a state of madness run by hypocrites in high places.