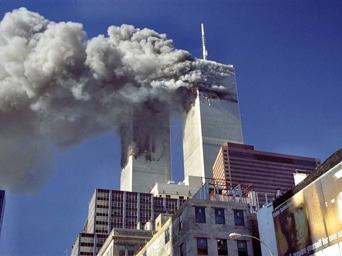 Dogma of New World Order (NWO) conceived by Zionists and neo-cons Richard Perle, Paul Wolfowitz and Dick Cheney in 1990 presented Islam as the chief threat to western capitalist system and the US uni-polarism after the fall of Soviet inspired communism. It envisaged giving USA sole proprietorship of nuclear weapons excluding Israel from effective nations. Pakistan’s nuclear program figured out prominently; intense lobbying to prevent Pakistan from going nuclear had already been going on since mid 1970s.  George W Bush senior and later Bill Clinton didn’t take NWO seriously since they had other important issues to dwell upon. Bush senior however initiated First Gulf War and Clinton authorized use of force against Haiti, Bosnia and Kosovo which didn’t satiate war mongers since NATO rescued Bosnian Muslims from marauding Serbs.

It therefore became necessary for the concept makers to select a man of their choice for the Oval Office to implement their agenda to emasculate Islam and to steal the resources present in Muslim world. Hence 2000 elections in USA were gerrymandered to make George W Bush junior the next president. While 9/11 was a false flag operation, both Afghanistan and Iraq were invaded and occupied on false grounds. Hidden motives were diametrically opposite to professed objectives. Ten-year war has virtually pushed the two occupied countries to Stone Age and Pakistan is being gradually ruined.

The US military’s claim of turning the tide in Afghanistan in its favor is premature and illusory. After the commencement of thinning out of troops this month, things would become clearer which side has an edge over the other?  Mere gaining of an edge will not be good enough for USA since it would still not allow it sufficient space to implement smooth withdrawal plan or post withdrawal political plan.

Irrespective of concerted efforts of US trainers to make the ANA battle worthy, performance of ANA will remain below expected standards. There has not been any drop in desertion and discipline cases including cases of firing upon foreign forces mainly because of their meager pay scale, economic hardships and insulting attitude of US-NATO officers and men. Indiscriminate firing by NATO resulting in heavy deaths of civilians’ is another cause of their heart burning. Possibility of revolt within ANA cannot be ruled out particularly when larger numbers of Pashtun soldiers are now being recruited.

In its madness to completely overwhelm the two occupied countries and make them as its client states, till recent the US was spending $12 billion a month in Iraq. It is spending over $10 billion per month in Afghanistan which comes to $110 billion annually to maintain its nearly 100,000 troops. Military operations will cost $95 billion in the ongoing financial year. Cost of one US soldier comes to one million dollars annually. One meal cost $28 for a US soldier which is more than most Afghans earn in a month.

Pentagon pays average of $400 to put a gallon of fuel in a military vehicle or aircraft. The US military is making clandestine payments to Taliban in Afghanistan for safe passage of military convoys carrying fuel and other supplies. 25% of money the US pays for security is paid to Taliban. The US relies heavily on private military and security contractors in conducting military operations. In 2009, 218000 private contractors were employed by defence department. In May 2010, the US Centcom reported presence of 26000 in Afghanistan but actual strength is 80,000. Karzai regime has taken steps to drastically cut down strength of private contractors.

USA’s defence budget is $633 billion. Thoughtless defence spending has increased the US federal debt by over 50% since 2006 due to collapsed economy and policy of bailing out banks. By end 2009, debt had risen to $12.3 trillion, but interest paid on it $383 billion was less than in 2006 ($406 billion) because interest rates had been pushed to extremely low levels. Interest now eats up half of government’s income tax receipts, estimated at $899 billion for FY 2010/11. Of this, $414 billion will go to interest on federal debt.

Despite spending so much, the ISAF in Afghanistan has taken up a rearward posture and the combat troops are bunker based, relying only on air power. US air attacks have been stepped up in recent months as a result of which civilian casualties in Helmand, Kunar and Nuristan provinces have risen. As per reports of James Cogan, Human Rights Unit of UN assistance to Afghanistan (UNAMA), upsurge in reckless US-NATO aerial attacks have soared civilian casualties in Afghanistan by 24% since 2010. Despite taking preventive measures, fatalities of ISAF are continuing for which the US has no remedy. It has conveniently shifted the blame on Pakistan alleging that IEDs are manufactured in FATA and exported to Afghanistan.

Home pressure is increasing and election dates are drawing closer. Obama is anxious to achieve some sort of victory for face saving but see no scope for it. He feels it was imprudent on part of sacked Gen McChrystal to demand additional troops twice in a year and that too with zero results. Gen Petraeus till his last day in his last appointment kept insisting that US military is in a position to reverse the losing tide if the withdrawal is delayed but Obama didn’t listen to him.

Setting aside the pressure built by Pentagon, Obama stuck to his December 2009 decision and announced the time schedule of troop withdrawal starting this month. Next two years and six months are critical for USA since in this intervening period it has to clear the mess piled up in ten years and make war-torn country stable and peaceful. Given the obtaining security environment, this is a tall order and seems next to impossible particularly when the US itself and its strategic partners governed by imperialistic mindset, lack political maturity and harbor ill intentions.

Euphoria of OBL is over since his departure has made no difference in growing radicalization and terrorism in the world in general and Middle East and Af-Pak region in particular. Conversely, OBL venture has begun to backfire since people suspect it to be a false flag operation. Many in USA doubt the veracity of claims made.

Despite spending billions of dollars in Afghanistan to make it pro-American, except for the beneficiaries in government, great majority of Afghans dislike America. They eagerly await their return. Pullout without accomplishing anything will cause a big setback to US prestige and reputation and will continue to haunt it for times to come. Historians will pen this mega event as another feather in the cap of Afghans and another black spot in US history. It will be a bigger miracle than the previous one since this time the Taliban have fought the war single-handed without the support of a super power or any other country.

Till this day the US is criticized for leaving Afghans in a lurch in 1989. The critics feel that had it stayed back for some time and helped in reconstruction and rehabilitation of Afghanistan, it could have avoided the present impasse. Anti-pullout lobbies are insisting that Washington must not repeat its blunder and warn that fallout of premature exit would be much worse than the previous one. Pro-pullout lobbies on the other hand are convinced that root cause of terrorism in Af-Pak region is the presence of foreign forces in Afghanistan and their meddlesome activities. They say that the heat of terrorism can now be felt in western countries and USA where radicalization and conversion to Islam has intensified in the aftermath of faked 9/11. The west is up against a new threat from within posed by white skinned Islamists and settlers. These fears have made war on terror highly unpopular and call for ending it is getting louder.

About the Writer: Asif Haroon is a retired Brig and a defence analyst. Email:[email protected]