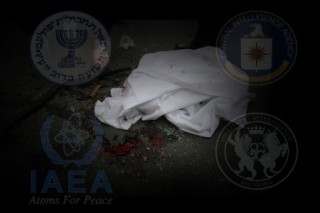 “I saw a motorcycle. They were wearing ski masks — black ski masks. They were two people. I saw the motorcycle speed by. I saw them. It seemed as if they had something in their hands,” this is how a female witness described the scene of the assassination of Iranian nuclear scientist Mostafa Ahmadi Roshan.

As the blade of blame is being directed against the CIA and Mossad for orchestrating the brutal assassination of the 32-year-old Iranian scientist in broad daylight in Tehran on Wednesday morning, the duo have preferred to feign ignorance as to the identity of the main perpetrator of the crime.

“I want to categorically deny any United States involvement in any kind of act of violence inside Iran,” US Secretary of State Hillary Rodham Clinton told reporters on Thursday.

Also, US Defense Secretary Leon Panetta said the US had nothing to do with the assassination.

The US is not the only party which has chosen to be in denial.

“I know that it is fashionable that whatever wrong happens in Iran, it is the United States and Israel. There is nothing new in this approach,” said Peres.

What kind of answer would the viewers expect from Peres to such a native question? The question is indeed as unwise in substance as the answer given by Peres.

In order to find out who really killed the Iranian scientist, one needs to put together the factual pieces.

Just two days after Iran sentenced to death CIA operative of Iranian descent Amir Mirzaei Hekmati, two unidentified men on a motorcycle attached a magnetic bomb onto the car of Iranian nuclear scientist Mostafa Ahmadi Roshan, a senior official at Iran’s Natanz nuclear facility, and detonated it on Wednesday, killing the young scientist and his driver.

It does not seem unreasonable to say that there was a link between the two incidents.

And in comes a third party e.g. Britain which bears as equal responsibility for the crime as the other two. British Middle East minister Alistair Burt has recently visited Israel and demanded all nations intensify pressure on Tehran to stall its nuclear program. Proudly he announced that “a few weeks ago the British government imposed tough new financial restrictions against Iran. These new sanctions make it illegal for any financial institution in the United Kingdom to have any dealings with any institution in Iran. They are the toughest of their kind. And we will build on them, getting others to follow suit.”

A close friend of Israel, Mr. Burt described the Iranian nuclear program as “the major issue at the top of our shared agenda,” saying that Israel can serve as a partner in a common cause against a regime dangerously loose.”

Lavishing pearls of British wisdom on the audience while speaking at Bar-Ilan University’s Feldman International Conference Center, Mr. Burt said Iran “does not just threaten Israel,” and sycophantically described Israel as the “bastion for stability in the region.”

Also contributing to the shared agenda of Israel and Britain in nuclear assassinations and sabotage activities in Iran is the remark of the Israel Defense Forces’ Chief of General Staff Lt.-Gen. Benny Gantz who said on Tuesday in an address to a closed Knesset committee that Iran should expect more “unnatural” events in 2012.

While the hawks in Washington have already declared a nuclear war on Iran in a metaphoric sense i.e. the assassination of the Iranian nuclear scientists, some of them avail themselves of a kind of literature in their reference to the nuclear assassinations which indicates the abyss of human degeneration. An impetuous example of this was reflected in a video circulated on the internet in which Rick Santorum, who is a sad excuse for a human being and a politically bankrupt White House aspirant, has unfeelingly described the assassination of Iranian scientists as “wonderful.”

He added that, “I think we should send a very clear message that if you are a scientist from Russia, North Korea, or from Iran and you are going to work on a nuclear program to develop a bomb for Iran, you are not safe.”

There are times when one wonders how on earth all these politically, ethically and intellectually Lilliputian-minded people have turned up together in this world.

All these facts aside, examples for the animosity of the UK, US and Israel towards the Islamic Republic are legion. However, this is just the tip of the iceberg of the myriad crimes orchestrated, funded and carried out by the trio.

There is no doubt that the recent assassination has caused a lot of intellectual anguish, emotional pain and political wrath in Iran.

In a stern warning, Leader of the Islamic Revolution Ayatollah Seyyed Ali Khamenei, lashed out at the United States and Israel for orchestrating the assassination of Mostafa Ahmadi Roshan. In a message of condolence to his family, Ayatollah Khamenei said the assassination was carried out under the unholy auspices of the CIA and Mossad.

“This act of cowardice, whose perpetrators and architects will never dare to confess to their foul and appalling crime or assume responsibility for it, has been engineered and funded by the CIA and Mossad [spy] services,” he said, adding, “The assassination shows that the global arrogance spearheaded by the US and Zionism has arrived at an impasse in their encounter with the determined, devout, and progressive nation of Islamic Iran.”

Central to the circle of the prime suspects in the nuclear assassinations is the IAEA itself. About two weeks ago, Mostafa Ahmadi Roshan had reportedly met the agency inspectors.

Isn’t it strange that the nuclear scientist was killed only two weeks after his meeting with the IAEA inspectors?

Another point which actually strengthens the speculation is that the names and identities of Iranian nuclear scientists who have so far been assassinated have been published in the list of sanctions issued by the IAEA.

Iran is certainly prepared for the worst but the enemies of the Islamic Republic should for their part await devastating consequences of colossal proportions if they wish to persevere in their path of mischief.