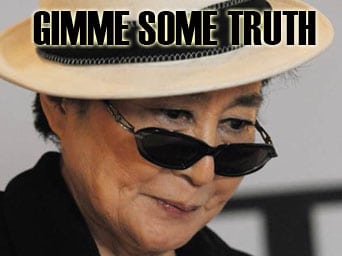 When I received my postcard invitation to this years Yoko Ono presentation of John Lennon’s drawings, sketches and words to benefit a charity titled “GIMME SOME TRUTH”

I immediately recalled the first Ono-Lennon Art Show I attended on 7 March 2004.

That year’s show was titled “When I’m 64” and show cased John’s love for Yoko and Sean, and benefited Instant Karma Adopt-A-Classroom.

It was held at 216 [2+1+6=9] North Park Avenue, which was then a recently defunct Victoria’s Secret. In the back of the store where padded bras had once hung had become a shrine of unending love of a father for his son. The drawings upon the walls had been created out of play between John and Sean, and Yoko had lightly tinged them pastel and turned them into a book called “Real Love”.

I was captivated by one called “Sheep Meadowing” in which sheep had levitated into the sky and had morphed into clouds above the heads of other sheep who were meadowing. Today, a print of “SHEEP MEADOWING” hangs above my bathtub- and isn’t that good? But on that day in 2004 after a time of timelessness cogitating upon those sheep, I reluctantly pulled my head back through the clouds to continue on to the second Gathering of Women for Peace, where sisters of every color and creed gathered in harmony at the Mosque in East Orlando. We had come together to imagine what Peace in the World would look like and what we could do to make it happen. All day long in my inner ear I did hear “Revolution 9” from the White Album tuned in so very clear-but with a few new lyrics:

Number 9 Number 9 Number 9…Let all who are little come in here, Wisdom has built her house; come eat her food and drink her wine and walk in the ways of understanding [Proverbs 9]…I’m so very small I’m so very small, already within the heart of every atom yet extend Beyond the Universe and connect every mother and child…Number 9 Number 9 Number 9…
Also in 2004, Yoko Ono again voiced her desire for real change in the Middle East through the GIMME SOME TRUTH Peace Prize. In 2003, Ono awarded Israeli artist Zvi Goldstein and Palestinian artist Khalil Rabah the inaugural prize including a $50,000 grant to support artwork that furthers cultural understanding which is a bedrock for peace.

In 2004, Ono awarded both investigative journalist, Seymour Hersh, in recognition of his reporting on the Abu Ghraib prison abuse scandal and Israeli Nuclear whistle-blower Mordechai Vanunu. For twenty-six years Vanunu has consistently maintained he acted on conscience and spoke out about Israel’s nuclear arsenal because he wanted to save Israel from a “new holocaust, a nuclear holocaust”.

In the interview with Reuters to announce the award, Ono said she hoped Vanunu could collect the award in person at the New York ceremony that also commemorated John Lennon’s 64th birthday and said, “Hopefully he can come and receive the award himself. He did complete his sentence, it’s not as though he’s a criminal. It’s possible that he can’t come – the point is that it’s another statement, a statement that the whole world can share and think about. People power is stronger than the power of institutions.”

Here’s to the Power of the Peaceful and as John Lennon said, “Our society is run by insane people for insane objectives. I think we’re being run by maniacs for maniacal ends…I believe that as soon as people want peace in the world they can have it. The only trouble is they are not aware they can get it.”

Troubles multiply when we do nothing and everything we do affects the future. With all the sabre rattling by world ‘leaders’ over Iran’s nuclear program and blind eyes over Israel’s, it is with “the fierce urgency of now” that we the people of truth and for justice must lead ‘leaders’ in the way we want to go: a Nuclear Free Middle East and World.

Yoko Ono grew up knowing the suffering of Japanese civilians in the aftermath of America’s atomic bombings of Hiroshima and Nagasaki.

For those with a conscience nuclear war is unconscionable, immoral, unethical and evil.

Human rights abuses and cover-ups “pose a more insidious danger to democratic societies than terrorism. In a democracy, people have the basic right to know what their leaders are up to, and what acts are being committed in their name. Rule of law must prevail in the treatment of prisoners of war and Israeli citizens need to be privy to decision making with regard to nuclear policy…Dissenters like Hersh and Vanunu force the public to confront uncomfortable issues and take a position, debunking the fraudulent secrecy of politicians and shaping policy.”[1]

“Ms. L, You know I wish you well” and I also want you to know that Vanunu is still waiting to get to New York: