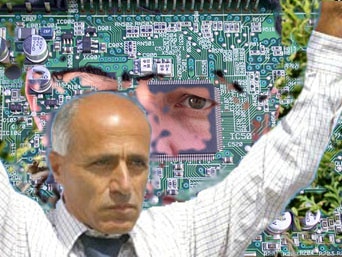 As of the submission of this article to VeteransToday, 7,409,500 visitor’s have crossed by wearewideawake.org where it was published first.

WeAreWideAwake was founded in July 2005; three weeks after my first of seven trips to Israel Palestine.

Most all of my visitors are Government cyber drones who monitor me but I have faith enough to believe that one DAY my Government will also respond, because: It’s a God Thing about Trees, Doors, Day and Vanunu

During the last event I attended on my first of seven trips to Israel Palestine, in June 2005,Rev. Theodore Hessburgh, president emeritus of the University of Notre Dame, said:

“The Peace of the World begins in Jerusalem.” I believed it then and I believe it still.

I began to document why in my first book, and you can read that chapter here: 16 Days in Israel Palestine

During that trip I also vowed to Vanunu, I would tell his story until he was FREE to leave Israel.

I have kept my word and I will continue to tell the Vanunu saga until Israel FREES VANUNU- OR Corporate Media does their job and relieves me from the responsibility of being the only reporter in the world who bothered to document a FREEDOM of SPEECH Trial in Israel!

“And the way to prevent any war with Iran is By demanding, making many programs about Vanunu’s Freedom now struggle, and publishing again all the interviews, Videos,and Dimona Photos. Telling Israel the first step in the Path for M E disarmament is let Vanunu go NOW!!”

What follows is 2005 video interview with Vanunu beginning with Arty, of Monkey Fist Productions:

The last two questions in that interview were the first two question I asked Vanunu- what was his message to US, and his response is even more timely NOW:

We Are Wide Awake (WAWA) interviews Mordechai Vanunu in 2005

The number of workers suffering from cancer who have filed lawsuits against the Dimona nuclear plant over the lack of proper safety measures is on the rise.
Victims say the high level of radioactive radiation that they were exposed to at Dimona is the main cause of the cancer that they are suffering from.

So far, over 60 people working at Dimona have filled lawsuit against the site’s officials. The victims say officials had assured them that they were protected properly and that the level of harmful radiation was being monitored carefully, but now the opposite has been proven.

On Monday, 24 more people, diagnosed with cancer, filled lawsuits against the Israel’s Atomic Energy Commission, accusing Dimona officials of deceiving them about their safety and protection.

Earlier this months, a lawsuit by 44 former Dimona workers told an Israeli court that they were sent to search for uranium ore across Israel without the necessary protection and that they were equipped only with goggles and masks that did not protect them from radiation.

The National Insurance, however, refused to recognize their cancer as work-related, claiming that the levels of radiation to which they were exposed were not the cause of their illness.

Dramatic increases in cancer cases, sterility and abnormal births south of the West Bank is said to be linked to a uranium leak at the Dimona nuclear power plant.

The nuclear reactor has become very old after 48 years, with experts warning of that the leakage could reach Jordan, Syria, Egypt and even Libya. [1]