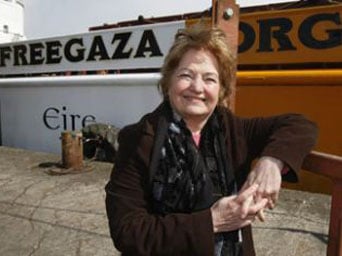 In 1976, in Belfast, thousands of ordinary people throughout Northern Ireland, led by mostly women, demonstrated for an end to the killings known as “The Troubles” which began in 1969. By 1998, over thirty-four hundred people were killed in the crossfire of a brutal war against British colonial interests, revolutionary republicanism, and a revolt against the age-old, oppressive bigotry and fanaticism of religious ideologies.

On August 10, 1976, Máiread Corrigan Maguire’s two nephews and one of her nieces, all little children, were killed on a Belfast street corner. “A British army patrol shot and killed an IRA gunman, Danny Lennon, whose car then plowed into the sidewalk, killing the children, and severely injuring Mairead’s sister Anne, who died several years later. In a land soaked with blood, their deaths came as a severe shock. Suddenly, thousands of people began to say, “Enough is enough. The killing and violence have to stop.”

Máiread, Betty Williams and Ciaran McKeown, organized weekly peace marches and demonstrations were attended by over half a million people throughout Ireland and England.

Máiread has insisted “that a peaceful and just society can be achieved only through nonviolent means and that the path to peace lies in each of our hearts.”

Fueled by her faith, Maried, a lone voice of wisdom, compassion and common sense stood on the streets of Belfast and said “No — No to the IRA, No to the UDA and LVF (the Ulster Defence Association and the Loyalist Volunteer Force, unionist/ loyalist paramilitaries), No to the British government’s emergency laws and interrogation centers and human rights abuses, No to injustice, bigotry, discrimination, No to any desecration of human life and dignity.’

In Belfast during the 1980’s and early 90’s, Máiread’s vision of non-violence was dismissed, ridiculed, and ignored, while those who called for retaliatory vengeance and violence were applauded. From the start, Maried understood that her dream had to reach beyond the narrow boundaries of North Ireland to embrace a non-violent future for all humanity.

After a year of political negotiations, a breakthrough settlement was reached on Good Friday 1998, bringing Northern Ireland to an Easter dawn of peace.

Maried and Betty were awarded the Nobel Peace Prize in 1977 for what had once been unimaginable became reality and Maried continues to envision the unimaginable: justice and peace in Israel Palestine.

On 25 JUNE 2012, Nobel Peace Laureate Mairead Maguire said ‘NO to War in Syria’ and has called for all inclusive dialogue to solve the conflict.

People around the world are deeply concerned about the ongoing crisis in Syria. While we are being presented with some perspective of what is occurring on the ground to the people of Syria, the door seems closed to others. We search for voices we can trust, voices which point to a peaceful, lasting solution to the conflict. We search for truth because it is truth which will set the Syrian people free. Truth is difficult to find, so through the haze of conflicting narratives we must inevitably hear the voices and wisdom of men and women of peace in Syria.
Many may believe that there is a fight going on in Syria for ‘democracy’ and‘freedom’.

We can be seduced into thinking there is a magic wand or instant formula to mix that will create a democratic country, but there are none.If it is a democracy people want they must strive for it in their own way.

It is said the Greek idea of democracy was that people would be equally valued. This is something every society has to strive for at every point in its history; it itself is a ‘revolutionary’ concept and a nonviolent revolutionary action.

Strive to value everyone equally. It is an idea, a motivation for a better world that doesn’t require blood; it requires the hard work of people and the nurturing of a community spirit; a constant growing of peace and it starts within each human heart.

Who are the voices of peace in regard to the crisis in Syria? Many of them we cannot hear from where we are standing. They are the mothers and father and children who want to leave their homes to walk to market or to school without fear. They are the people, who have been working hard for Syria, for the idea of Syria as a secular and modern country.

There are some Syrian voices that have been heard consistently since the beginning of the crisis. Many of them are anonymous and they speak to us about injustices and atrocities.

Numbers are given and fingers are pointed. The blame may be apportioned correctly or it may not. Everything is happening too quickly; commentators and politicians are making decisions with haste and looking only in one corner for support for their certainty.

But in the heat of the madness of violent ethnic/political conflict we must listen and ask questions and hear and speak with some uncertainty because it is certainty that can take a people and a country in a rush to war.

The face of the Mufti of Syria is hardly known in the western world, but if we have learned anything from past conflict, it is the importance of all inclusive dialogue. He and many other Syrians who have peace in their hearts should be invited to sit with a council of elders from other countries, to tell of their stories and proposals for ways forward for the Syrian people.

The United Nations was not set up to provide an arena for the voices and games of the powerful; rather it should be a forum for such Syrian voices to be heard. We need to put ourselves in the shoes of the Syrian people and find peaceful ways forward in order to stop this mad rush towards a war the mothers and fathers and children of Syria do not want and do not deserve.

We all know there are Imams, priests and nuns, fathers, mother, young people all over Syria crying out for peace and when the women in hijabs shout to the world after a bombing or a massacre in Syria ‘haram, haram’ let us hear and listen to them.

We are sure there are many heroes in Syria among them, Christian Patriarchs, Bishops, Priests, and religious.

A modern hero of peace, one whose name we do know and whose voice we have heard is Mother Agnes Mariam*.

In her community her voice has been clear, pure and loud. And it should be so in the West. Like many people in Syria she has been placed in life threatening situations, but for the sake of peace she has chosen to risk her own existence for the safety and security of others. She has spoken out against the lack of truth in our media regarding Syria and about the terror and chaos which a ‘third force’ seems to be spreading across the country. Her words confront and challenge us because they do not mirror the picture of events in Syria we have built up in our minds over many months of reading our newspapers and watching the news on our televisions. Much of the terror has been imported, we learn from her.

She can tell us about the thousands of Christian refugees,forced to flee their homes by an imported Islamist extreme.

But Mother Agnes Mariam’s concerns, irrespective of religion, are for all the victims of the terror and conflict, as ours must be.

In all our hearts we know War is not the answer for Syria (Nor for Iran). Intervention in Syria would only make things worse. I believe all sides are committing war crimes and the provision of arms will only results in further death.

The US/UK/NATO and all foreign governments should stay out of Syria and keep their funding and troops out of Syria.
We should support those Syrians who work for peace in Syria and who seek a way of helping the 22 million or so people of Syria to resolve their own conflict without furthering the chaos or violence.

*Mother Agnes Miriam of the Cross is a greek-Catholic (Melkite) nun of Lebanese / Palestinian descent and has lived and worked in Syria for 18 years. She restored the ancient ruined monastery of St. James the Mutilated at Qara, in Homs province where she founded an order which serves the local and wider community. In 2010 the monastery welcomed 25,000 visitors both Syrian and international. http://www.maryakub.org/index_en.html

PS: After Mairead read my first book, KEEP HOPE ALIVE, she emailed me, “I have just finished reading your wonderful book ‘Keep Hope Alive’. I found it most inspiring and can see in your story the influences of your Spiritual journey – Merton, Dorothy Day, Fox, St. John of the cross, Francis!! All of whom I share as they are, I believe, great guides to the Spiritual journey. The book brought me closer to you Eileen – and I was Moved by your great heart and compassion for all those who suffer – Especially the Israelis and the Palestinians and people of Gaza. Thank you for your faithfulness to them (and for helping to provide and Plant so many Olive trees – a real symbol of hope for the Palestinians.” – Mairead Maguire