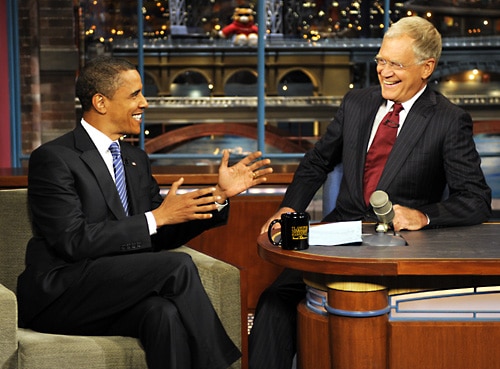 Obama to Appear at Comedy Show Instead of Meeting Netanyahu: Reports

US President Barack Obama will appear on a late night comedy show during a September 18 visit to New York at the same time he could have met Israeli premier, reports say. Reports by Israeli media outlets of Obama’s presence in David Letterman’s comedy show, instead of meeting Israeli Prime Minister Benjamin Netanyahu, come amid mounting tensions between the two allies over setting “red lines” by Washington on Iran’s nuclear energy program, a request the US has rejected.

10. His Presidential Joy Buzzer is out of order.

7. Obama has a bet with Gen. Dempsey to see who can give Netanyahu the biggest smackdown. Obama wins.

6. When Netanyahu invites you to dinner and serves filet of sole, it comes from a dead Palestinian’s foot.

4. A new poll showed that Jewish voters prefer Letterman to Netanyahu by a 94 to 6 percent margin.

3. Sheldon Adelman made Obama an offer he couldn’t refuse, and Obama refused. The horse’s head has been stuffed and mounted and hangs over Obama’s desk by a single hair.

2. “Benjamin Netanyahu” is actually David Letterman in disguise, doing a wickedly funny parody of Zionists so subtle it has thus far eluded the media gatekeepers AND the majority of the Israeli electorate.

1. Obama was invited to join a barbershop quartet with Netanyahu, McCain, and Romney singing “bomb-bomb-bomb, bomb-bomb-Iran” but Obama’s too cool for off-key white-boy a cappella.