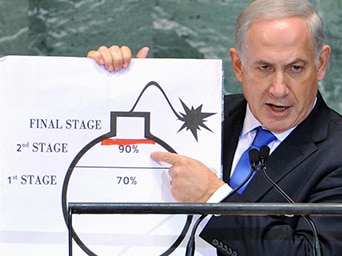 Yesterday, September 27, 2012, Israeli Prime Minister Benjamin Netanyahu gave an impassioned speech that was full of half-truths and lies to the United Nations. He gave the speech to promote the drawing of red lines which Iran must not cross in its nuclear program. As was done when the religious Jewish state of Israel pushed the US politicians to start the war for Israel’s benefit with Iraq, Netanyahu cherry-picked statements from the International Atomic Energy Agency to give the false impression that Iran is close to building a nuclear weapon. Iran denies it even wants a nuclear weapon and says its nuclear program is for electric power and for medical use. The IAEA has said Iran is not using any of its material to build nuclear weapons which requires enrichment above 90%.

Netanyahu’s speech shows the power and righteousness Netanyahu and Israel automatically assume because Israel is a religious Jewish state. And he played it and milked it for all it’s worth. This is dangerous. Especially when the person and the nation wrapped in “revealed” religious self-righteousness are promoting a religious war.

Netanyahu started out his speech by laying claim to all of Jerusalem based on the foolish and superstitious based Hebrew Bible/Old Testament claims which teach the myth that God gave the ancient Hebrews/Jews a gift of real estate which became the Jewish state of Israel and which has Jerusalem as its capital. He said Jerusalem has been Israel’s capital for 3,000 years! It seems he never heard of the Roman Empire which wiped Israel off the face of the Earth almost 2,000 years ago. Today Israel is in violation of United Nations Security Council Resolution 476 which clearly defines Israel as “the occupying Power” of Jerusalem and refuses to recognize Jerusalem as Israel’s capital based on the principle that “acquisition of territory by force is inadmissible.” The United Nations through Resolution 476 also “Reaffirms its determination in the event of non-compliance by Israel with this resolution, to examine practical ways and means in accordance with relevant provisions of the Charter of the United Nations to secure the full implementation of this resolution.” In spite of Israel being in violation of this United Nations resolution and dozens of others, Netanyahu goes before the UN demanding that it act against Iran.

The hypocrisy of Netanyahu demanding that the US and other nations draw a red line which Iran cannot cross in its nuclear program without a war being started is sickening. Israel has a nuclear stockpile along with submarines from which they can be launched anywhere in the world. Having a religious state like Israel which is based on “holy” scriptures (Israel does not even have a constitution because it’s much more of a religious state than a democracy and a religious state cannot tolerate any man-made laws as are found in a constitution being above “God’s laws” which the religious zealots believe are in the “holy” scriptures) which promote the idea that God chose the Jews “above all people that are upon the face of the earth” (Deuteronomy 7:6) and that God will see to it that Israel is “on high above all nations of the earth” (Deuteronomy 28:1) and that any nation that will not serve Israel “shall perish; yea, those nations shall be utterly wasted” (Isaiah 60:12) is a real true and present danger to the world. Especially when Israel actually has the nuclear, chemical and biological weapons to bring about the perishing and wasting of other nations which is promoted in the Hebrew Bible/Old Testament. With these real weapons of mass destruction Israel is able to revisit the good old days of its Biblical past which the Jewish state is based upon and which Netanyahu is so proud of. Good old days as mentioned at Deuteronomy 3:6 which reads, “And we utterly destroyed them, as we did unto Sihon king of Heshbon, utterly destroying the men, women, and children, of every city.” (For more documented examples of why Israel is a horrific danger to the world read the new eBooklet The Danger of Israel – for the Kindle edition click here.)

Too bad the US did not follow the advice of the Deist George Washington who wrote and said in his Farewell Speech, “. . . a passionate attachment of one nation for another produces a variety of evils. Sympathy for the favorite nation, facilitating the illusion of an imaginary common interest in cases where no real common interest exists, and infusing into one the enmities of the other, betrays the former into a participation in the quarrels and wars of the latter without adequate inducement or justification. It leads also to concessions to the favorite nation of privileges denied to others which is apt doubly to injure the nation making the concessions; by unnecessarily parting with what ought to have been retained, and by exciting jealousy, ill-will, and a disposition to retaliate, in the parties from whom equal privileges are withheld. And it gives to ambitious, corrupted, or deluded citizens (who devote themselves to the favorite nation), facility to betray or sacrifice the interests of their own country, without odium, sometimes even with popularity; gilding, with the appearances of a virtuous sense of obligation, a commendable deference for public opinion, or a laudable zeal for public good, the base or foolish compliances of ambition, corruption, or infatuation.” This sounds like he was talking about the present situation between the US and Israel. He went on to instruct us to be on guard against such foreign interests and relationships as the US politicians currently have with Israel when he said, “Against the insidious wiles of foreign influence (I conjure you to believe me, fellow-citizens) the jealousy of a free people ought to be constantly awake, since history and experience prove that foreign influence is one of the most baneful foes of republican government.”