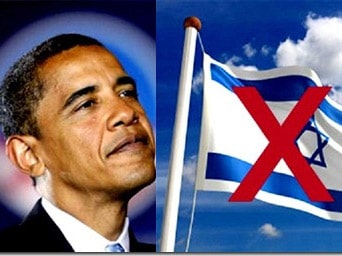 All observers admit it: Israeli Prime Minister Benjamin Netanyahu did everything in his power to destroy President Barack Obama’s political career.

President Obama should return the favor.

He should destroy Netanyahu’s career in the biggest, most spectacular way possible – by busting Netanyahu for 9/11.

The major US and international media, owned and operated by cheerleaders for Israel, are so terrified by this prospect that they are trying to pretend it is “business as usual” between the US and Israel – maybe even between Obama and Netanyahu – despite the obvious blood feud between the US president and the Israeli prime minister.

One exception: The post-election Yahoo News story headlined “Obama victory spells trouble for Israel’s Netanyahu.” The author, Jeffrey Heller, writes: “Israeli Prime Minister Benjamin Netanyahu faces an even more awkward time with Washington and re-energized critics at home who accused him on Wednesday of backing the loser in the US presidential election. With Iran topping his conservative agenda, Netanyahu will have to contend with a strengthened second-term Democratic president after four years of frosty dealings with Barack Obama and a rift over how to curb Tehran’s nuclear program.”

Heller’s article frames the dispute between Obama and Netanyahu according to the Israeli propaganda template. It suggests that Obama’s only two choices are (a) to launch a major war against Iran, as desired by Netanyahu, or (b) to continue imposing sanctions to starve the Iranian people, in order to punish Iran’s leaders for pursuing a peaceful nuclear energy program – a program that is completely legal under international law, unlike Israel’s massive, illegal nuclear weapons program!

These may be the only two choices that are acceptable to Israel. But they are not the only choices available to Americans.

American strategist Zbigniew Brzezinski, in his 1999 book The Grand Chessboard, pointed out that the most important single element of a viable US strategy in Eurasia is friendship with Iran. What Brzezinski did not state outright, but left for the discerning reader to discover “between the lines,” is that Israel is badly damaging US national interests by forcing the US to be an enemy of Iran.

Israel hates Iran because Iran’s leaders, like the vast majority of the people of the Middle East, do not accept apartheid Israel as a legitimate state.

If the US maintained good relations with Iran – not a client state relationship as existed under the Shah, but a friendship-of-equals based on mutual respect and shared interests – the US strategic position in Eurasia would be greatly enhanced.

Then why is the US starving the Iranian people, murdering Iranian scientists, paying MEK terrorists to bomb and kill large numbers of innocent people, and generally doing everything it can to hurt Iran? The short answer: Because Israeli interests dictate US Mideast policy.

Some apologists for Israel claim that it’s really about US dollar hegemony. They say that Iran’s move to sell oil and gas in other currencies threatens the US dollar, which is why the US is so antagonistic to Iran.

The US dollar is issued by the Federal Reserve, a private corporation owned by the biggest “American” banks. But those banks are not really American. The leading banksters who create American dollars out of nothing, backed by nothing, are ethnically Jewish and primarily loyal to the state of Israel.

After all, the Rothschild family, the biggest of the “eight families,” created Israel as its base of criminal operations. Even mainstream historians admit that Lord Rothschild created Israel in 1917 by handing the British an offer they couldn’t refuse: “We can win World War I for you, by dragging America into the war – but in return, you must give us Palestine.”

So the US and Iran are actually allies, not adversaries, in the battle against Zionist dollar hegemony.

The Zionist bankster cartel that prints our currency out of thin air can easily print enough money to buy up virtually all major Western media. That’s why most Westerners have unconsciously accepted a pro-Israel world-view.

The banksters also have enough money to buy as many politicians as they need. That is why the US Congress and the White House are Israeli-occupied territory.

But today, thanks to Netanyahu’s overweening chutzpah, Obama and allied forces in the US military and intelligence communities have a chance to do what no US President since JFK has dared to do: Tell Israel to go to hell.

All Obama has to do is go on television and announce: “We have discovered credible evidence of Israeli involvement in 9/11 and the subsequent cover-up. As of this moment, I am declaring a state of national emergency based on undeniable evidence that our nation has been covertly attacked and occupied by a hostile foreign power. I have ordered the FBI to arrest several thousand suspected Israeli agents, and I will be forming a second 9/11 Commission, led by former President Carter, to expose the full, horrible truth about the 9/11 attacks.”

Such “scorched earth” payback from Obama would be exactly what Netanyahu deserves.

Netanyahu, a close personal friend of confessed 9/11 criminal Larry Silverstein, went on record immediately after 9/11 chortling that the attack on America was “very good.”

Then he quickly added that what he really meant was that 9/11 was very good for Israel.

It is time for President Obama to give Netanyahu the payback he has worked so hard to earn.

But does President Obama have the courage, integrity and statesmanship to save the world’s biggest power, the USA, from a filthy little country run by certifiable madmen?

Can he get away with it and escape assassination?

The next four years will answer these burning questions.