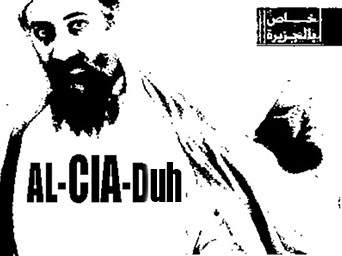 The al-Nusra front in Syria has officially announced that it is part of al-Qaeda. Even before the announcement, everyone knew it was al-Qaeda. So why is it being armed to the teeth with US-supplied weapons, and given training and strategic and diplomatic support by the US government?

The US, after all, is officially at war with al-Qaeda, which the American government blames for the still-unsolved crimes of September 11th, 2001.

The US says al-Qaeda poses such an extraordinary threat that the Constitution must be suspended, the Bill of Rights set aside, and the President given emergency powers to kill or kidnap anyone on earth without due process of law. This is a very odd claim, since there is no evidence that al-Qaeda poses any real danger to Americans. Even if 9/11 were an actual al-Qaeda attack, and the 19 utterly incompetent pseudo-Muslim playboys blamed for it somehow beat billion-to-one odds and actually pulled it off, terrorism of all kinds would still not pose any statistically significant threat to Americans, who would be more likely to die from lightning strikes and bathtub drownings.

Since 9/11, we have learned about the real capabilities of al-Qaeda. The mentally-challenged shoe bomber Richard Reid, and the equally-inept underwear bomber Abdulmutallab, were apparently both too stupid to know that C-4 type explosives cannot possibly explode without a detonator. By trying to light C-4 with a match, and failing to even start a small fire with which to burn their own appendages, these imbeciles made al-Qaeda the laughingstock of the world.

If we could answer those questions, we might be better able to understand why al-Qaeda is receiving such massive US support for its depredations in Syria.

Three-quarters of Muslims want US forces to immediately withdraw from all Islamic countries. Almost four-fifths agree that the so-called “war on terror” is really a war on Islam. Three-quarters support shariah as the basis for the legal system in every Islamic country. Two-thirds want to “unify all Islamic counties into a single Islamic state or caliphate.” (Source: WorldPublicOpinion.org)

So a crushing majority of Muslims supports what al-Qaeda claims it is fighting for. Yet less than 20% of Muslims view al-Qaeda favorably, while roughly 80% view it unfavorably.

Why do most Muslims support every one of al-Qaeda’s stated objectives, yet despise al-Qaeda itself?

The answer: Muslims are horrified by al-Qaeda’s terrorist tactics. Polls show that Muslims, more than any other group on earth, reject terrorism. Fewer than 10% of Muslims worldwide believe that attacks on civilians may be justified by political ends.

Americans – unlike Muslims – do support terrorism. According to a Gallup poll, more than half of non-Muslim Americans believe it is sometimes justifiable to target and kill civilians. And nearly three-quarters of Americans support drone strikes, which primarily kill innocent civilians.

It seems that the so-called “war on terror” is actually a war OF terror. Americans have been brainwashed into supporting their own government’s terrorist war on the world.

So how does al-Qaeda fit into this picture?

“Al-Qaeda” means “The Database” – a CIA database of mujahideen fighters, mercenaries, and drug smugglers. “The Database” was created by the CIA and its Saudi and Pakistani proxies to fight the Russians in Afghanistan in the 1980s. After the Russian defeat, The Database was re-deployed to smuggle drugs and harass the Russian empire in places like Chechnya and the Balkans. (I will henceforth translate “al-Qaeda” into English as “The CIA Database.”)

Suddenly, The CIA Database was a convenient excuse for shredding the Constitution, doubling the military budget, and launching wars of aggression against Israel’s enemies.

That explains why The CIA Database is attacking Syria under US sponsorship. Syria is a de facto ally of Hamas, Hezbollah, Iran, and Russia, all of which wish to remain independent of the US-Israeli empire.

But the CIA Database is not just America’s Arab Legion. It is not just a database of deluded jihadis and mercenaries deployed by the US-Israeli empire to destabilize its enemies.

Throughout his career, Bernard Lewis has been fascinated by the medieval Ismaili Assassins – the topic of his dissertation and first book. The Assassins were a radical Muslim sect that destabilized the Middle East and weakened its political structures, allowing the European crusaders to conquer al-Quds (Jerusalem).

In the final essay collected in Benjamin Netanyahu’s How the West Can Win – a manifesto foreshadowing the “war on terror” and laying bare its strategies – Lewis argued that the West needed to create the modern equivalent of the Ismaili Assassins in order to destabilize the Muslim Middle East and open it to conquest by the new, Zionist Crusade.

The West quickly followed Lewis’s advice. It created a modern version of the Ismaili Assassins: The CIA Database, better known by its Arabic name “al-Qaeda.”

The CIA Database not only kills Muslims by the tens of thousands and destabilizes their governments. It also provides Americans with a hated enemy, and justifies unlimited US “interventions” (more properly termed “wars of aggression”) anywhere on the planet.

Perhaps most importantly, al-Qaeda operates as a tool of psychological warfare against Muslims. By identifying legitimate Muslim anti-imperialism with a brand name that is hated by 80% of Muslims and 99% of non-Muslims, it undercuts that anti-imperialism, and saps Muslims’ desire to struggle for their independence.

All communications experts know that the best way to stop an idea from spreading is to put that idea in the mouth of an unattractive spokesperson. By identifying Islamic unity, anti-imperialism, and anti-Zionism with terrorism, strategic ineptitude, murderous sectarianism, and obscurantism, the CIA Database’s brand-name “al-Qaeda” has been used to “skunk” the whole Islamic awakening, and hinder the liberation of Muslim countries from Western and Zionist domination.

That is why The CIA Database in Syria is being armed and trained by – who else – the CIA…and its assets among the US-occupied Muslim-majority countries of the Middle East.

Bernard Lewis is undoubtedly amused by the fact that so many self-styled jihadis are actually working for The CIA Database, fighting against the very cause they think they are supporting.