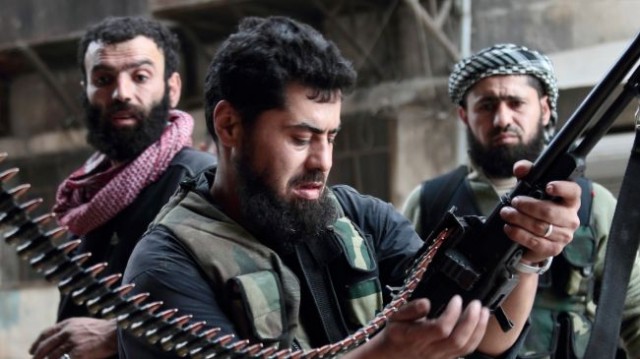 [ Editors Note: As the slaughter continues in Syria, the West is still trying to figure out a way to snatch some kind of cloak of victory for this disastrous endeavor. They continue to blindly focus in removing Assad as part of any settlement.

But why would Assad, the Russians, Iran or anyone not involved in the terrorism there go along with that? They would still have to be fighting the Jihadis, but with some foreign puppets at the helm.

Does anyone think they would fight harder, knowing they would be used as cannon fodder in two seconds if it served some geopolitical purpose for the West? The issue eclipsed Assad a good while ago. The focus now is Western and Gulf  State sponsored terrorism, directly and/or indirectly supported by the US. That  Jihadi tar baby is a sticky one indeed.

Russia, or Putin I should say, has threatend increased action against not only the terorrists but those supporting them. It remains to be seen what action that will be. But the cargo planes continue to fly into Syria in a steady stream and Iran seems to be supplying financial support but keeping  a distance.

Iran also wants to discuss at the Geneva Syria conference who has really been pulling the terrorist strings there, and what will Western jurisprudence and the UN do about it?

The West has no moral standing whatsoever in the issue. And it is a hard thing to recover once lost. The 100,000 dead in Syria, and those who are going to die will all agree they did not enjoy their brief flirtation with Western demoracy. And what the West has sown, could soon come back to haunt them… Jim W. Dean ]

It seems that the international community has finally listened to the warnings voiced by the most sensible of its members and realized that the biggest threat to Europe and the United States comes not from the current regime in Damascus, that they directed considerable effort and financial resources to combat in the last three years.

The threat comes from the people they were supporting, the armed militants who joined Al-Qaida in Syria and its related groups such as Jabhat al-Nusra and Islamic State in Iraq and Al-Sham.

At least, these are the conclusions that the U.S. intelligence services, British MI-5, Scotland Yard’s combatting terrorism department, have drawn.

These services recently undertook to investigate terroristic groups active in Syria, the emissaries of which were directed to carry out terrorist attacks in London.

A high-ranking official of one of the Western secret services directly expressed his concern about turning of the controlled Islamic extremist enclaves in Syria into one of the strongholds of “global jihad”.

Hundreds of Muslims from Europe and the United States, who wish to gain combat experience on the side of the terrorists, go there. He went even further, underlining that “the armed forces of the Syrian regime should be preserved for future battles with the Islamists.

Moreover, it is necessary to avoid the mistakes made ​​in Iraq and Libya, where, after the removal of Saddam Hussein and Muammar Gaddafi, in a security vacuum, disbandment of the army and police, terrorist groups strengthened their positions.”

Understanding the need for a joint effort in order to fight Syrian terrorists, the officers of the European intelligence services have started to hold meetings with the representatives of the Syrian President Bashar al-Assad in order to provide the latter with intel on the extremists arriving to Syria.

As it was reported by a number of media sources, particularly The Wall Street Journal, the Europeans perceive a total of 1200 Islamists, that may be returning back to Europe from Syria, as a potential threat.

On December 5, 2013, the Internal Affairs Ministers of France and Belgium in Brussels spoke about the importance of strengthening and coordination of joint efforts against the terrorist threat, coming from the Syrian rebels.

In particular, they noted that the number of young Europeans traveling to Syria under the influence of the extremist groups and Islamic radicals’ propaganda has risen to nearly 2,000 people instead of those 600 noted in June of 2013.

That is why, during the last few months, law enforcement agencies and secret services of Great Britain, Germany, Holland, Spain, Italy, Sweden, Denmark and other European countries, are actively consulting with each other, and their coordination of activities in this area has improved.

Indeed, in recent years, the threat of terrorist groups operating in Syria has become increasingly dangerous not only for this country, but for many countries in the world whose citizens are enlarging the numbers al-Qaeda branches in Syria. Quite vivid is the tendency to consolidate Syrian military opposition towards two regional structures of Al-Qaeda – the Al-Nusra Front and the Islamic State in Iraq and the Levant.

The U.S. refusal to launch a missile and bomb attack on Syria contributed to the formation of the opposition mentioned above. Thus, the groups of the “moderate” stripe lost hope in receiving additional support from the West and the United States and, at the same time, ceased to see the sense in joining, even formally, the Free Syrian Army.

In addition, in the areas of the Al-Nusra Front and the Islamic State in Iraq and the Levant’s control, they succeeded in making the other opposition groups join them, without leaving them any choice.

Both of these groups have become more active anti al-Assad forces with a high degree of foreign jihadists’ joining, who have already received combat experience in Iraq, Chechnya, Afghanistan, Libya and Yemen.

The Al-Nusra Front, relying mainly on the radical part of the Syrian opposition, is the most acceptable ally for numerous Salafi anti al-Assad groups in Syria. Focusing on forcing B. Al- Assad from power and the creation of an Islamic state, the group consists of about 10% foreign fighters, which represent approximately 6000 members.

The Islamic State in Iraq and the Levant force, created as a direct branch of the Iraqi al-Qaeda cell – Islamic State of Iraq is crueler in its activities. The group is formed of 5,500 foreign fighters that form its backbone, as well as 2,000 ideal indoctrinated Syrians from the northern part of the country and about 15,000 people, performing a “secondary role”.

There is also a special and very cruel unit, consisting of 250 militants. They are almost all foreigners (mostly immigrants from Russia’s North Caucasus), called the Jeish Mujakirin va Ansar (JMA), which is headed by an ethnic Chechen, Abu Umar Al-Shishani. The Islamic State in Iraq and the Levant group’s leader – Abou Bakr al-Baghdadi, known as Abou Dua, specially moved from Iraq to Syria, where he said he “feels more secure”.

This is the place from where he directs this group. His influence can be felt not only in Syria, but also in the countries situated far away. The zone of group’s influence stretches from the north of rural Aleppo and Idlib provinces, up to the Turkish border.

Here terrorists have started creating their own quasi-state formations, on areas not controlled by the Syrian government.

Anxious not to repeat the mistakes of the Iraqi al-Qaeda, destroyed for its excessive cruelty towards civilians by the U.S. in 2006-2008, they have introduced sharia laws here, trying to organize the work of schools, courts, local authorities, and an essential food supply system.

To do this, they use the income obtained from the exploitation of oil wells under their control, as well as through participation in the thriving Turkish-Kurdish mafia group’s contraband activities in the war-ravaged regions.

Furthermore, the Islamic State of Iraq and the Levant, organizing ambushes, mainly on the roads leading to the Turkish border, actively practice the kidnapping of foreign citizens. According to some individual information, currently 35 foreign journalists and more than 160 political activists and members of the Free Syrian Army have been kidnapped.

Due to the financial and weapons support from Qatar, Saudi Arabia and some Western countries operating in Syria, Al-Qaeda’s affiliates significantly increased their numbers and influence in recent months. About 500 jihadists arrive in Syria monthly, joining the Islamic State in Iraq and the Levant, where the network of recruiting foreign fighters is headed by Abu Ahmad al-Iraqi. He is believed to have fought in Iraq before this.

According to Western experts, the increase in the number of al-Qaeda’s branches in Syria and the Syrian conflict reduce the threat of terrorism in other countries. This is explained by the fact that the Islamists, (primarily from Europe, USA and other regions) who want to participate in the “global” jihad, go to Syria first, without trying to carry out terrorist attacks at home.

The West’s actions directed at al-Assad’s removal, with the active support of the armed opposition, for a long time limited the international community in performing anti-terrorism operations against even the most radical Islamists.

That is why the best tactical solution of the West in solving the Syrian conflict has been, first, to prevent either side from gaining a decisive advantage over any of the warring parties. Second, the West tried actively involving local tribal leaders in their conflict with the jihadists.

Under these conditions, along with the peaceful settlement of the conflict, where already more than 117,000 people were killed and millions of refugees created, the process and negotiations between the regime and the rebels, to be held in January in Geneva, can be the beginning of the formation of a front in Syria and abroad.

This front will be directed against al-Qaeda. However, the main thing in this process – is not to miss this chance to fight against terrorism and establishing of peace in Syria.