Home Life NEO – Sweeping All Away To War 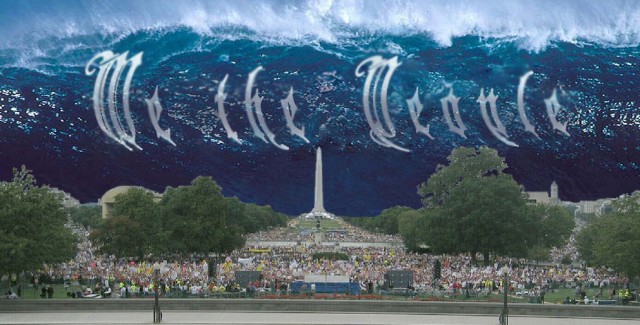 Sweeping All Away To War

[ Editors Note:  Konstantin Penzev brings us another one of his insightful articles on the Alice in Wonderland labyrinth of US foreign policy with its silly name, the “Asian Pivot”. The idiot who thought the large scale battlefield terminology was cool should have been fired on the spot for being an idiot.

But more might need to be added to the list. Maybe the speechwriter was told that the White house wanted an offensive name, without using the words war, or attack.

What we are seeing here is an attempt to create justification for deploying the need for American military might over the most miniscule territorial dispute, when the treaties were designed really to be triggered by conventional military attacks. The re-interpretation game is being played on us here.

As Konstantin describes below, attempting to trigger defense treaty obligations over a dispute on two islands is off the crazy scale. But it is more than that.

The US, whose navy and collage of bases in the 700 range, all done to obviously establish and offensive footprint, now considers anyone wanting to have exclusive control zones around their shore lines where modern weaponry cannot travel without permission. It is considered a threat to the US, despite their doing the same thing all the time on a huge scale.

This is the same US where if the Russians want a maritime base in someplace like Central America then that is considered a strategic threat to American and the offending government must be overthrown. It is time the American public shifted from the already well hashed out disputes of the horrible treatment of US veterans after conflicts, and began challenging these official forward deployments to set up trip wires everywhere of future conflicts.

If there is a real threat, let them take their best shot at selling us on it. But I will be the first to say here that leaving these types of decisions in the hands of the White house and/or Congress are both very dangerous threats to the rest of us.

Our military is openly being used for what Marine General Smedley Butler described as the muscle for US business interests in his famous book War is a Racket.

Americans have been disenfranchised from having the safety valve direct input into our far reaching strategic defense/offense planning.

That has been done because “they” knew we would never approve, similar in some respects of how East Ukraine does not want to be ruled over by the coup-meisters in Kiev and their foreign backers teamed up with the nationalist terror squads.

Gosh, who would want that? They are not being framed as rebellious for not wanting to be exploited victims.

This is no children’s game folks. While we have lots of concern show on internet platforms that follow such things the issue has never become a grass roots political one in terms of being addressed or even polled in campaigns.

Someone wants to keep it below the radar. That is their Achilles heel, so we need to do a lot more than we have to challenge them publicly from square one on the policy.

We must force them to defend it and demand access to the classified information that we need to show how they have misled us. We stand to lose the rest of what they have not take from us if we don’t do this…Jim W. Dean ]

On 24 April, during a visit to Tokyo, US President Barack Obama declared that his country has an obligation to defend Japan should the confrontation with China over the disputed Senkaku Islands become exacerbated.

Nearly two weeks before, on 5 April, the Japanese government had been reassured by US Secretary of Defense Chuck Hagel, who declared that the US has no hesitation about fulfilling its treaty obligations according to the 1952 mutual security pact between the US and Japan.

This turn of events naturally gives rise to the following question: why did the US government find it necessary to clarify something so (seemingly) obvious to Tokyo twice in the course of two weeks?

Could it be that Tokyo was not satisfied with the head of the Pentagon’s status and level of authorization?

Should we not be expecting the US Senate, Congress, and the entire administration to appear in Japan in a couple of weeks, offering ritual prayers and veneration of ancestral spirits on Mount Fuji?

Perhaps the head of the Pentagon said something after his visit to the Land of the Rising Sun that upset the Japanese emperor? Yes, those Pentagon leaders are like that. And the opinions they hold do, indeed, have a highly suspicious aspect. After visiting Tokyo, Chuck Hagel set course for China, where he remained from the April 7 to April 10 on an official visit.

The Chinese, for their part, did not seem particularly pleased with the defense secretary’s visit, and devoted more or less the entirety of his time there to explaining their critical positions on a number of specific and more general issues to the head of the American military establishment.

Chinese Minister of National Defense Chang Wanquan clearly articulated the PRC’s position: “We will neither compromise on, concede or trade on territory and sovereignty, nor tolerate them being infringed on even a little bit.”

All territorial issues concerning the PRC and the Russian Federation have long been settled—since 2004 (in a treaty ratified in 2005).

The name of President Putin was at that time sullied with much invective from the “patriotic” community. Nowadays such bursts of “patriotism” are perceived with a certain amount of skepticism.

After Secretary Hagel heard the position of the official representatives of the PRC concerning Taiwan’s arsenal and the issue of the Spratly Islands, he went to have a look at the aircraft carrier Liaoning, recently equipped for service in the People’s Liberation Army Navy. Officers of the Chinese military showed the top Pentagon official the ship’s navigational facilities, command and control center, flight deck and flight control station.

It was thus revealed that the Liaoning is not made out of bamboo and papyrus but rather is a fully equipped state-of-the-art warship. Nobody knows what Obama and Hagel talked about after the latter returned to Washington, but no doubt the question was asked:

“And how many such pieces of hardware can Beijing put out in the next couple decades?” It may be that the participants in that conversation reached the grim conclusion that “It looks like quite a few.”

Abe declared the tremendous importance of demonstrating the durability of the Japanese-American alliance and the US commitment to Asia, since China continues to make efforts to change the status quo by force.

After his visit to Japan, Obama visited Malaysia and the Philippines, which have territorial disputes with the PRC, and his loyal vassal South Korea, for the purpose of strengthening economic and, naturally, military ties.

On 22 April, as Obama was packing his bags for the trip to Japan, the Shanghai authorities seized a cargo vessel belonging to the Japanese corporation Mitsui, weighing 226,000 tons, in compensation for China’s losses during the Japanese occupation at the time of the Second World War. Just like that.

It turns out that in Beijing, nothing has been forgotten and a lot has been learned. In the 1930s, the Japanese company Daido Shipping, the precursor of Mitsui O.S.K., took the Chinese watercraft Shun Feng and Xin Tai Ping, but a year later, due to events in the Sino-Japanese War, refused to return them.

Later, the ships became part of the Imperial Japanese Fleet and were sunk by the Americans. In December 2007 the Shanghai Maritime Court demanded that Mitsui O.S.K. pay 2.9 billion yen (28 million dollars) in compensation for these events that took place 80 years ago. The Japanese corporation refused to pay the sum, as a result of which its vessel was seized. So what happened next?

On 24 April, according to Agence France Presse, the Japanese company paid 28 million dollars in compensation to the Chinese. What comments did this elicit? Yes, law and justice triumph every once in a blue moon, but manifold questions arise as to the precedent set here.

Some time before, between Hagel’s and Obama’s visits, on 14 April, six Russian strategic rocket bombers completed a flight near Japan’s territory. In 2013 no such flights were made; at that time, Russia abided by the wishes of its Japanese partners and agreed to begin talks on developing an agreement to prohibit dangerous military activity.

Suddenly, in mid-March 2014, the Japanese foreign ministry made a unilateral declaration, refusing to take part in the agreement and announced that it cared nothing for any national interests, to which it added something about “Western solidarity.”

How does one respond to that? The Russian military command continued training crews in strategic aviation in its area of responsibility.

Obama left for his Asian tour with thoughts of Ukraine (obviously thinking of the arduous fates of Turchinov, Yarosh, Yatsenyuk, Muzychko and other fascist-democrats). In fact nobody knows what Obama was really thinking about, but Voice of America journalist William Ide asserts that he had Ukraine on his mind. All of the people working for Voice of America seem to be blessed with rare telepathic gifts.

Obama’s main thesis at the time of his Asian voyage was the constantly repeated invocation: “We will not allow China to do anything like what Russia took the liberty of doing in Ukraine. We will stand as one body to protect the Senkaku Islands and may the Force be with us!” Yes, they will cover the earth with radioactive ash over two rocks in the sea. This is what American principles mean – the last man to die in the next world war will be a “democrat.”

Here, an eminently reasonable question comes to mind. China and the Senkaku Islands are a completely different situation from Russia and Crimea. Even those US senators who are convinced that human history dates from the birth of Marilyn Monroe must understand that.

The purpose of the hysterics created by the White House and Tokyo is unclear. But a great deal that goes on in this world is unclear. For example, Russian patriots demand that the US government give Alaska back. Are they, these patriots, really planning to leave Moscow and settle there?

If an analogy is to be made, then Russia and Crimea are more like China and Taiwan. In that case, there would be some actual justification for all of the hullaballoo about machinations by Beijing. In the end, reunification of the two Chinas must take place at some point, and it will. Of that you may be certain.