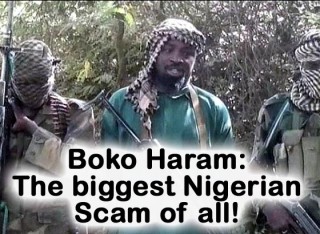 We are told that a radical Islamic group called Boko Haram has kidnapped schoolgirls in Nigeria. This classic good-vs.-evil tale pits crazed Muslim extremists against adorable innocent children. The whole world demands the rescue of the girls, and deplores the evils of “radical Islam.”

It is a terrific story – the stuff Hollywood films are made of. But is it true?

Though the story is hogging the global media spotlight, it is full of gaping holes and wildly inconsistent official pronouncements. The Christian Science Monitor, hardly a bible of conspiracy theorists, points out:

“For all the urgent headlines and advocacy, however, what is still missing are basic facts. It is unclear how many girls were abducted, who they are, who did it, at what time, and exactly how.”

A story featuring unknown heroines and unknown villains performing unknown actions at an unknown time does not even qualify as a myth. The word “rumor” might even be an exaggeration.

“For starters, the number of girls taken away by the self-described Islamist radical Boko Haram and later rescued keeps changing. First it was 129 girls rescued. Then 121 were rescued and 8 were missing. The next day, none had been rescued at all. No collective set of photos of the girls appears to exist, or even all their names (some websites with photos of the girls have used photos lifted from elsewhere).”

This is all very strange. It reminds some researchers of the anomalies surrounding official pronouncements about the victims of the Sandy Hook school shooting of December 2012 and the Boston Marathon bombing of April 2013.

The local news website Boston.com lists the names, ages, and hometowns of four people killed by the Boston bombing and sixty more who were wounded. Authorities claim that 264 people in all were wounded. But videos of the bombing show that the area where the bomb went off was largely empty of people. The claim that 264 people were wounded strikes many researchers, including University of Minnesota Professor Emeritus James Fetzer, as grossly exaggerated. There is no documentation, not even a list of names, for 204 of the 264 people allegedly wounded.

Additionally, Professor Fetzer and other researchers argue that the Boston bombing videos prove that some of the worst “injuries” were Hollywood-style fakes. He says that one of the alleged victims, Nick Vogt, actually lost his legs in Afghanistan, not in the Boston bombing. In his article “Some ‘hard lessons’ from the Boston Bombing” Fetzer reproduces photographs purporting to show Vogt being prepared with fake wound prosthetics in the aftermath of the bombing. The photos and video of Vogt and another man who supposedly lost his leg, Jeff Bauman, raise serious questions about how people can lose legs from blunt force trauma yet suffer minimal loss of blood. Bauman was placed upright in a wheelchair – hardly the recommended treatment for someone who has just lost a leg – and taken away looking fully alert and in no apparent pain.

“Look at the photos of Jeff Bauman. Why are his legs not spurting blood?  How can he be upright, conscious and alert as he is being rushed off in a wheelchair? His fake prosthesis falls off as they are rushing him away, so they stop and reattach it! Just how dumb are the American people?”

Massachusetts State Representative Stella Tremblay agreed – and was censured for her fellow legislators for raising questions about the bombings, which photos show were carried out by Craft International mercenaries, not the Tsarnaev brothers.

Fetzer also believes that the Sandy Hook school shooting of December 14th, 2012 was a staged event. In an article co-authored with Professor James Tracy and other co-authors, entitled “Top Ten Reasons: Sandy Hook was an Elaborate Hoax,” Fetzer criticizes the State of Connecticut’s official criminal report:

“The report does not even include the names, the ages or the sex of the alleged victims of the shooting. There is no actual identification of any of the dead…Anyone with the inclination can comb through hundreds of years of American crime reports and surely would not find another instance in the which the names, the ages or the sex of the victims is not given–with the exception of victims of sex crimes. Withholding this information is part of a pattern of deception and deceit that extends to the Clerk of Newtown making secret arrangements with the state legislature to avoid releasing death certificates to the public, attempts to withhold the 911 calls and gag orders that were imposed upon those responsible for tearing down the building.”

To summarize: More than 200 alleged victims of the Boston Marathon bombing remain nameless, without a shred of evidence that they even exist. The official Sandy Hook report, likewise, withholds the names of victims and witnesses. And now the Nigerian government offers no convincing evidence that any specific individuals were actually kidnapped, nor any details about when or how the alleged kidnapping occurred.

The recent video featuring supposed Boko Haram leader Abubakar Shekau alongside pictures of praying schoolgirls raises more questions than it answers. First, if the person in the video is really Shekau, why does the Nigerian government continue to insist that Shekau is dead? Why did Boko Haram and Shekau (assuming it is really Shekau) wait three weeks to claim responsibility for the alleged kidnapping?

The Christian Science Monitor points out that “the only hard evidence that Abubakar Shekau is even the leader of Boko Haram is that he says so. This is a man who threatened to kill former British Prime Minister Margaret Thatcher from his hideout in northeastern Nigeria more than six months after she died.”

Many Nigerians wonder whether Boko Haram really exists. The supposed radical Islamic organization has been blamed for the killings of thousands of people. Yet details about the group are so murky that many observers suspect it may be more mythical than real. According to one theory, the real killers are mercenaries paid to stage false-flag “Islamic terror” in order to justify foreign intervention in oil-rich Nigeria.

The government of Nigeria owes the world a specific, coherent, fully-documented and transparent explanation of the kidnapped-schoolgirls story. Likewise, the US government owes the world fully-transparent accounts of the Boston and Sandy Hook events. In all of these cases – as with so many other spectacular terrorist incidents – people have good reason to suspect that their governments are lying to them.

We know that the US government has a long history of planning and staging fake terror incidents to galvanize public opinion, curtail civil liberties, launch pre-planned wars, pursue a “strategy of tension,” and gain other strategic objectives. Anyone who doubts this should simply feed the terms “Operation Northwoods” and “Operation Gladio” into a search engine.

Other governments do the same thing. Israel, with its Lavon Affair, USS Liberty massacre, Achille Lauro false flag, and many similar incidents, may be the world’s false-flag champion.

Are elements of the Nigerian government, perhaps with foreign help, staging or assisting “Boku Haram” attacks? Could this be just the latest example of a worldwide trend: The creation and deployment of brutal Takfiri militant groups to smear Islam in service to Zionism and imperialism?