Home Life Dear “Jewish Defense League”: Why aren’t I on your death list? 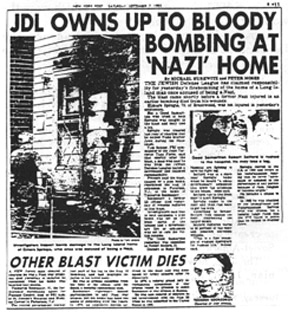 It has come to my attention that you have been issuing death threats against my friends and colleagues, including Press TV’s Canada correspondent Joshua Blakeney and freelance journalist Tom Mysiewicz. Check out my new Press TV article:


I am writing in protest of these threats. Frankly, I am appalled. And what really galls me is: Why did you leave me off the list?! A death threat from the JDL is one of the highest accolades in journalism. Many consider it several notches above a Pulitzer prize. What haven’t I done to not deserve such an honor? Yes, I know Blakeney and Mysiewicz are good. But as the dead Syrian soldier said to the ISIL maniac: What am I, chopped liver?

Maybe you left me off the death list because you saw my article:

Top Ten Reasons Why Israel Actually IS a Legitimate State


Yes, this article does present the ten strongest arguments for Israel’s legitimacy that exist. It begins with:

10) Hitler, Pol Pot, Genghis Khan and Attila the Hun all killed more people than Israel has. So why are you singling out Israel for criticism, you anti-Semite?

1) We own the media, Hollywood, the banking system, Congress, and the White House. If we said the Fishy-Smelling Underwater Kingdom of Atlantis was a legitimate state, and a giant squid was its prime minister, we could make you believe us.

You seem not to have understood that this article is satire. Its point is that every available argument for Israel’s “right to exist” is preposterous. Since you somehow believe these preposterous arguments, you may have missed the satire.

Perhaps you also applauded my article pointing out the advantages of moving the whole US Congress to Israel:

US Congress Moves to Israel in Deficit-Reduction Effort

In the wake of the announcement that 81 US Congressmen are leaving on an AIPAC-sponsored junket to Israel, the new SuperCongress announced today that the entire legislative branch of the US government will be moved to Tel Aviv. The reason, according to informed sources, is to save on travel junket expenses to reduce the national deficit.

Relocating Congress to Israel is expected to significantly lower the cost of AIPAC-sponsored junkets: Airfare costs will be eliminated, hotel costs reduced, and “preferred customer” cocaine and prostitution discounts taken advantage of. The move should bring a noticeable reduction in the hemorrhage of US taxpayer dollars to the Zionist state… (full article)

I regret to inform you that this article, too, is satirical in nature. While it pretends to be touting the advantages of moving Congress to Tel Aviv, the article’s real thrust is to lampoon US subservience to Israel. Please read it again and see if you don’t agree.

While mercilessly skewering the Jewish State of Israel at every available opportunity, I also enjoy flaying such prominent Jewish Zionists as Larry Silverstein and Benjamin Netanyahu. You may recall that I’m the guy who created the Larry Silverstein Chutzpah Award, and gave it to such worthies as “lets murder Americans in false flags for Israel” psycho Patrick Clawson, and “the Mossad should murder Obama for Israel” editorialist Andrew Adler.

As for Netanyahu, I have been raking him over the coals on a regular basis. Check out:

Is NetanBombYou a ‘Toon? Will US Senate crown Netanyahu emperor?

After reading the above material, and finally understanding the satire, perhaps you will reconsider your decision to leave me off your death list.

Yes, I realize that I am not an enemy of the Jewish religion or the Jewish people, but merely an anti-Zionist who despises all abuses of power, regardless of ethnicity or religion. I’m sure Joshua Blakeney and Tom Mysiewicz also fall in that category.

So if that’s what’s bothering you, let me emphasize to you that I strongly support Gilad Atzmon’s efforts to critique Jewish identity politics, and I agree with many of his arguments. That means that I do recognize that there are negative aspects of Jewish culture (tribalism, self-centeredness, material greed, rabbinical pedantry) as well as positive ones (high educational standards, iconoclasm, great sense of humor, bagels.) Which in your book makes me a despicable anti-Semite worthy of death. Right? I certainly hope so!