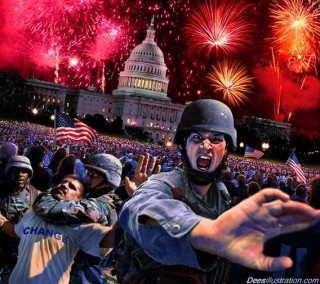 Iraq has spent more than a decade under US occupation. Afghanistan has been occupied for almost 13 years. More than a million people have been killed, and millions more rendered homeless refugees, by occupation forces.

The Zionist occupation of Palestine, too, is sponsored by the US taxpayer. According to the Christian Science Monitor, the US has spent more than a trillion dollars propping up the Zionist regime, which just murdered roughly 2,000 Palestinians, most of them civilians, during its most recent assault on Gaza.

These are just the most vicious and deadly of the many American-sponsored occupations.

America’s rulers have also imposed “occupation lite” on 130 countries around the world. These nations are under de facto occupation by U.S. troops stationed at more than 900 military bases.

But now, as Malcolm X famously said, the chickens are coming home to roost. The U.S. itself is coming under occupation, as militarized police forces – made up in part of hardened veterans of the counterinsurgency wars in Iraq and Afghanistan – are treating the American people the same way they treated their victims in foreign lands.

The shooting of unarmed teenager Michael Brown in Ferguson, Missouri has highlighted the fact that much of the USA is now under de facto military occupation by murderously hostile troops posing as police officers. Witnesses confirm that Michael Brown was shot dead as he stood harmlessly with his hands in the air attempting to surrender. The police, as American police always do in these situations, have lied outrageously as they attempt to protect one of the murderers in their ranks.

As protests against the Michael Brown shooting spread, the police in Ferguson responded with full-scale SWAT team tactics reminiscent of those used against the people of Palestine, Iraq and Afghanistan. Whole platoons of officers in black helmets and body armor have stood atop armored personnel carriers aiming their assault rifles at protesting crowds, while experimental weapons, including a long-range acoustic weapon that produces excruciating ear-splitting pain, have been used against demonstrators. A second police shooting critically injured a protestor at 1 a.m. on Wednesday.

The Saint Louis County SWAT teams have been driving tanks through the streets and pointing their weapons at vehicles that get too close. It looks exactly like occupied Iraq, where U.S. troops regularly murdered whole families of civilians whose cars looked “suspicious” as they approached checkpoints.

Police in military fatigues have screamed at reporters to “get down” and “back off” or risk getting caught in the crossfire. They have arrested reporters for getting too close to their self-created war zone, then blasted peaceful crowds with stun grenades and doused them with tear gas.

Even the corporate-controlled U.S. mainstream media has been questioning the savage military-style occupation of Ferguson, Missouri – and the larger trend toward militarizing law enforcement. When reporter Wesley Lowery of the Washington Post was gratuitously assaulted and arrested for filming, the Post’s executive editor Martin Baron released a statement saying the newspaper was “appalled by the conduct of the police officers involved.”

Lowery tweeted: “Officers slammed me into a fountain soda machine because I was confused about which door they were asking me to walk out of.” He added: “Got no explanation at any point why in custody other than ‘trespassing’ – at a McDonalds where we were customers.”

Along with brutalizing reporters and falsely arresting them, Ferguson police threw canisters of tear gas at an al-Jazeera America film crew. These deranged storm-trooper cops apparently saw the al-Jazeera logo and imagined themselves back in some Middle Eastern war zone.

At least they aren’t sending out snipers and air strikes to murder reporters like the Zionists do in Gaza… at least not yet.

But they are moving in that direction. All over America, police departments are buying military helicopters, tanks and armored vehicles, automatic rifles, and even drones – and preparing to use them against the American population.

The occupation of America, like the occupation of Middle Eastern nations, has a racial edge. US troops sent to occupy the Middle East are trained to despise the local people as dark-skinned “sand n-gg-rs” and “hajjis” who can be slaughtered with impunity.
In places like Ferguson, where the police are virtually all-white while the majority of the population is black, the militarized police imagine themselves as occupation troops lording it over the darker-skinned natives. The election of Barack Obama, the first African-American President of the United States, has not altered the fact that people of color in many parts of the US are still living under what amounts to a kind of foreign occupation.

But it isn’t just people of color who are suffering under the increasingly vicious militarized occupation of America. Police are also brutalizing more and more working-class and even middle-class white people.

If you search “police kill dog” on youtube you’ll get more than 26 million hits. One could spend weeks watching videos of militarized police marauding through American communities, shooting pets and occasionally their owners, kicking down innocent people’s doors, beating people within an inch of their lives or worse, and generally acting like a bloodthirsty army running amok over occupied foreign territory.

One lesson of 9/11 is that the US imperial oligarchy no longer restricts itself to mass-murdering browned-skinned people at home and abroad. By blowing up the World Trade Center and killing almost 3,000 people, most of them white-skinned middle-class office workers, the masters of empire were sending a message: The elite has shifted gears and is now prepared to slaughter anyone, including white, middle-class Americans.

In effect, 9/11 was a declaration of war on America – not by radical Muslim terrorists, but by the globalist ruling elite. The American middle class was the biggest obstacle in the path of the New World Order plan to create a one-world plutocratic tyranny. 9/11 – which militarized American society, hollowed out the U.S. economy, and turned the U.S.A. into an occupied nation – was designed to remove that obstacle.

Will Americans awaken and rise up against their oppressors, like the people of Gaza, Iraq and Afghanistan? Or will they obediently line up to be microchipped the next time the New World Order elite terrorizes them with a big false flag attack?