Home Investigations Israel, ISIL have a lot in common 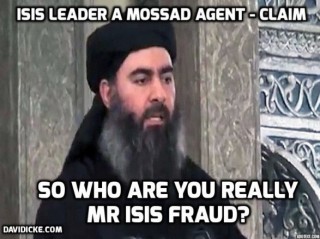 Both of these terrorist entities define themselves in terms of rigidly sectarian ideologies. Both are squatting on stolen land. Both brutally trample on the rights of those they consider lesser beings – simply because they hold “second-class” religious views. And both proudly commit horrendous atrocities.

The world’s Jews are becoming increasingly uncomfortable with so-called State of Israel, which purports to represent them without ever having asked their permission. (Israel defines itself as the so-called state of, by and for all Jews, and gives all Jews everywhere the automatic right to Israeli citizenship – while denying citizenship to most non-Jews, including the vast majority of Palestinians, simply because they profess another religion.)

Ex-liberal-Zionist Anthony Lerman, writing in the New York Times, has just written a political obituary entitled “The End of Liberal Zionism.” Like many other Jews, Lerman recognizes that it is becoming impossible for liberal, tolerant, reasonable Jewish people to continue to support the so-called Jewish State of Israel.

Saturday’s New York Times also featured an ad placed by anti-Zionist Jews attacking “Israel’s wholesale efforts to destroy Gaza and the murder of more than 2,000 Palestinians, including many hundreds of children.” The ad was signed by 237 survivors and descendants of survivors of the Nazi holocaust.

Last week Henk Zenoli, a Dutchman who helped save a Jewish boy from Nazis during World War II – and whose father died in a Nazi concentration camp – returned his “Righteous Among Nations” award to Israel. He said the award, given to non-Jews who helped Jews during the holocaust, no longer meant anything given the “murder carried out by the [so-called] State of Israel.”

Zenoli has felt Israel’s murderousness personally. He has lost six relatives– so far – to Zionist butchers during this summer’s Israeli assault on Gaza.

Today, the real holocaust is in Occupied Palestine.

Just as thoughtful Jews and their friends are horrified by the crimes of the so-called State of Israel, the vast majority of Muslims are appalled by the so-called Islamic State. (Unlike Israel, which still enjoys a fair amount of Jewish support, Islamic State has virtually no support from any of the world’s established Muslim nations, scholars, or religious organizations.)

Ironically, while Jews are turning against the so-called Jewish State, and Muslims denounce Islamic State, the two terrorist entities seem to be working together. According to some reports, hundreds of ISIL terrorists have been treated in Israeli hospitals. And while the so-called Jewish State of Israel supports Islamic State’s attempts to overthrow the government of Syria, Islamic State for its part opposes resistance against Zionism while instead working to destabilize Israel’s enemies.

Since the self-styled Jewish State and Islamic State have so much in common – including sectarianism, atrocities, destabilization of neighbors, and squatting on stolen land – and share the same enemies (reasonable Jews and Muslims, and reasonable people in general) – perhaps they should merge into a single entity: ISrael. Netanyahu and al-Baghdadi could serve as co-caliphs, just as Rome sometimes had two emperors.

ISrael would be a paradise for people who like to shoot children and cut off heads. It would be a wonderful place to be a fanatically intolerant bigot loathing lesser beings who profess religious incorrectness.

In ISrael, self-styled chosen people who despise outsiders as cattle would rub shoulders with fanatics who see everyone but themselves as heretics worthy of death. The two groups would get along famously. al-Baghdadi would feel perfectly at home in an Israeli settlement, where he could occasionally venture outside the barbed wire with his rifle to shoot “heretics,” wreck their homes and uproot their olive trees. He might even be able to talk the Zionist settlers into beheading their Palestinian victims rather than just shooting or beating them to death.

They need not reject the notion of religious governance. If Jews wish to live according to Jewish law, and Muslims according to Islamic law, they should be allowed, indeed encouraged, to do so.

In Islamic Spain, the Ottoman Empire, and other classical Islamic societies, each religious group would organize itself according to its own laws and control its own affairs. Muslims did not force Christians and Jews to follow Muslim rules while the Christians and Jews did not impose their laws and lifestyles on Muslims.

There is no reason why similarly tolerant, pluralistic religious governance cannot happen today.

But modern states have a totalitarian outlook. They try to force everyone to live the same way and follow the same rules. That is why modern states, be they a so-called Jewish State like Israel, an Islamic State like al-Baghdadi’s, fascist or communist states like Hitler’s Germany or Stalin’s USSR, or even so-called liberal democratic states like Europe and the USA, have not yet learned to grant their citizens the level of pluralistic autonomy enjoyed by the religious communities of medieval Andalusia.

Fanatical, intolerant, sectarian, human-rights-abusing “religious” regimes like Netanyahu’s and al-Baghdadi’s are simply extreme examples of the totalitarianism at the root of the modern nation state. So reasonable Jews and Muslims must abjure the siren song of monolithic secularism, even as they reject the defamation of their religions by the vicious extremists of the “Jewish” and “Islamic” states.