Reports from Pentagon insiders tell of a strange and inexplicable “bifurcated” US policy. While the US has signed agreements and allocated funds to train “moderate groups” to fight against ISIS only — a clear policy change — other American commands are continuing to train ISIS itself. 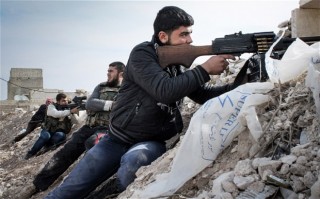 Confirmed reports indicate while CentCom, representing “Big Army,” the main US fighting force are meeting overtly inside Turkey following new White House policy, JSOC, the mysterious Joint Special Operations Command, a group “hijacked” by former US Vice President Cheney back in 2004, has just finished training its 3,000th ISIS “cadre.”
Military analyst Colonel James Hanke, editor for Veterans Today noted the following:
“There is a clear divergence of purpose here. Watching ISIS operate, it is clear they have received far superior training than that given the Iraqi Army, training the US spent several hundred billions dollars on. The secret training camps in Jordan, established three years ago but now “gone dark,” are staffed with elite Special Forces. There is strong evidence that the core of ISIS capability is tied to these bases in Jordan and “black budget” facilities known only to the likes of Senator John McCain, soon to take over as Chairman of the all-powerful Senate Armed Services Committee.”
Those who look on the Syrian war, a fight against a “Free Syrian Army” that simply doesn’t exist, even by its own admission, is a small part of a complex story that is only now piecing together.
Last week, Turkish news sources reported that the US Central Command was meeting in Ankara in order to begin training of up to 2000 something, freedom fighters, jihadists, terrorists, mercenaries, they weren’t clear on that part.
From the US military publication, Stars and Stripes:

“Pentagon spokesman Col. Steve Warren said he could not confirm the number of Syrian fighters, or the time line, but confirmed a plan had been worked out between Washington and Ankara.
“We will train members of the Syrian moderate opposition in Turkey as well as Saudi Arabia,” he said.
No Department of Defense trainers have arrived in Syria yet, Warren said, and the United States has yet to even begin the process of recruiting and vetting of rebels for the training effort. Officials say the initial round of training would produce of 5,000 trained Free Syrian Army members within about a year.
“Saudi Arabia in September agreed to host the training of moderate Syrian rebels to assist the U.S. strategy to combat Islamic State insurgents.”
That last sentence is the “kicker” as it were. Those to be trained inside Turkey are to be fighting on the other side. As American humorist Jim W. Dean so often says, “You just can’t make stuff like this up.”


You see, the last vestiges of the Free Syrian Army gave up their positions last week and their leadership fled to Turkey. They no longer hold border crossings into Turkey and are no longer engaged in operations at all. In fact, as of last week, they no longer exist. There are, in fact, no “moderate forces” to be trained whatsoever, only the Syrian Army and their real allies, the Kurdish Perg Mersha and the Iraqi army, rumored to be aided by elite Iranian troops from the Al Quds Brigade.
While the US is still maintaining rhetoric advocating the overthrow of the Assad government, a plan the White House, Joint Chiefs of Staff and Defense Secretary Hagel have increasingly distanced themselves from, the realities of America’s over politicized military forces are having an impact on the regional conflict.
While JSOC and the Special Forces have opened the “black budget coffers,” seemingly overfilled by contributions from Saudi Arabia and Qatar, in support of ISIS, the US Army itself has set upon an equally disastrous path. The US has a much checkered history when it comes to picking allies.

CIA trained Chechen’s are at the forefront of nearly every terrorist struggle, fighting against US forces in Afghanistan, leading ISIS brigades and even, according to official sources, directly tied to the Boston Marathon bombings in 2013.
All the while, Chechen terrorists, fighting alongside Israeli “volunteers,” are tied to the massacre in Odessa and, according to some sources, planning the downing of Malaysian Airways flight MH17 as well.
One of the key aspects of any “black op” is “deception and cover.” Every military operation, in order to have a chance of success, has to “telegraph” false intentions to the opposition in order to confuse and, eventually, demoralize resistance. Turkey, clearly playing “both sides against the middle,” has seemingly taken on this role. There is little question that Turkey has facilitated transit of WMD’s into Syria and Iraq.
It was American journalist Serena Shim, recently killed in Turkey, who discovered Sarin gas being transited from Georgia to Al Qaeda backed forces near Aleppo. Before her death, she had filmed ISIS fighters being transited into Syria by the Turkish government. An investigation into her death is underway by an international team headed by Dr. Franklin Lamb of Veterans Today.
While supplying ISIS, Turkey has taken on the supposed role as American base of operations training forces against ISIS. Turkey has also facilitated the transit of small numbers of Perg Mersha fighters into the Kobani region, center of a life and death struggle for the few months.

Turkey’s strange role, longtime covert ally of Saudi Arabia and Israel, Turkey, aligned with extremist elements inside the US, operating a major espionage and blackmail ring according to whistleblower Sibel Edmonds, may well also be providing “cover and deception” for Jordan as well.
Sources citing the Jordanian bases used to train ISIS also note that wounded ISIS fighters transit Jordan for treatment in Israeli hospitals. Moreover, though ISIS fighters are clearly being transited through Turkey, likely a new American trained batch numbering 2000 are “in the works,” it is also clear the majority are coming through Israel and Saudi Arabia to US training facilities in Jordan.
It is also clear that supply lines for critical weapons including advanced communications and intelligence platforms, are being supplied to ISIS through the same “ratlines” as well. Thus, when Iraq increasingly looks to cutting off lines of communications between ISIS headquarters in Mosul, they are focusing on lines of transit leading through Jordan, through Israel and Saudi Arabia, not just Turkey.
When first reports came out citing ISIS as being tied to intelligence agencies, there was little background. When leaked documents from the American “Able Danger” investigation cited the origins of “Al Qaeda” as operational groups within the CIA along with Saudi and Israeli intelligence, their role, or more appropriately, “lack of any role” in 9/11 and the US led wars against Iraq and Afghanistan began to make sense.
Where we are inexorably being led is along that same path, building a case to support the hypothesis that ISIS is a “construct” of intelligence agencies. Building a case out of something more than innuendo and conjecture requires hard intelligence. We are seeing that mosaic come together now.