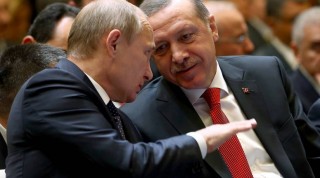 As Putin explained, “If Europe doesn’t want to realize this, then it means it won’t be realized. We will redirect the flow of our energy resources to other regions of the world. We couldn’t get necessary permissions from Bulgaria, so we cannot continue with the project. We can’t make all the investment just to be stopped at the Bulgarian border,” Putin said. “Of course, this is the choice of our friends in Europe.”

The Russian President didn’t waste a minute to show how he plans that redirection. The real loser is not Russia, but the EU who managed yet again to shoot themselves in the foot by their buckling under to Washington pressure from Victoria Nuland’s State Department and the Obama Administration hawks.

The South Stream would have provided secure delivery to southern EU countries including Bulgaria, Hungary, Austria, Italy, Croatia and also Serbia. It would avoid the current transit pipelines running through Ukraine. Similarly, to avoid a repeat of the US-induced Ukrainian disruptions of Russian gas to the EU in 2009, Russia and Germany agreed the construction of Nord Stream, also avoiding Ukraine.

Now, by forcing Bulgaria, an EU member, to halt South Stream, using blackmail of a Bulgarian bank bailout last June, the EU has made itself dependent on gas security via Ukraine, a country the EU’s own political spinelessness has helped turn into a failed state ruled by a cabal of Brussels-and-Washington backed gangsters and oligarchs. We might use the term “stupid” to describe EU policy on South Stream, were it not for the fact at the end of the day Washington blackmail on the EU caused the South Stream blockage policy to be implemented, just as the economically devastating EU Russia sanctions were imposed only after extreme pressure on Berlin and Paris by Washington.

Russia and Turkey have just signed an agreement to expand the existing Russian Blue Stream gas pipeline to Turkey by an immediate 3 billion cubic meters to the current 13.7 bcm of gas pumped to Turkey via Blue Stream, for a total near 17 bcm.

Putin also announced a fascinating new option, to build a gas hub on the Turkish-Greek border to supply Europe with gas to compensate for the loss of South Stream. He told the press, “We are ready to not only expand the Blue Stream, but to build another pipeline system to supply the growing demand of the Turkish economy, and if it is deemed justified, to set up an additional gas hub for the South European consumers on Turkish territory, near the border with Greece.”

Gazprom CEO Alexei Miller revealed that he has signed a memorandum of understanding on building a new Turkey-bound pipeline under the Black Sea, with capacity to pump 63 billion cubic meters to Turkey, about equal to the now-defunct South Stream.

If we follow the motion of his feet and not so much his mouth, Erdogan is above all a pragmatic political survivor. Internal conflict, above all with the CIA-linked Fetullah Gülen movement as I detail in Amerikas Heiliger Krieg, has increased distance between Erdogan and Washington despite Turkey’s NATO membership. Until now, Washington’s neo-conservatives Richard L. Morningstar, now Ambassador to Azerbijan, had relied on an obedient Turkey as an alternative to carry gas or oil from Azerbaijan independent of Russia.

If Erdoğan accepts the Russian offer of forming an energy alliance, it would mark a sharp policy change for Turkey, a geopolitical shift of immense importance and Erdogan knows as much, even if he seems to have a confused idea of a clear strategy for Turkey. A Russian-Turkey energy hub on the Greek border would signal a decisive change of strategy by Erdoğan.

A significant hint of that was contained in the statement that the new gas supplies to Turkey from Russia will be paid in local currencies, not in the US dollar. Turkey already is Russia’s largest foreign gas customer after Germany. Erdoğan has also asked to be accepted in the Shanghai Cooperation Organization led by Russia and China.

F. William Engdahl is a strategic risk consultant and lecturer holding a degree in politics from Princeton University, and is a best-selling author on oil and geopolitics; exclusively for the online magazine “New Eastern Outlook.”

Author Details
F. William Engdahl
F. William Engdahl is strategic risk consultant, author and lecturer. He is author of the best-selling book on oil and geopolitics, A Century of War: Anglo-American Oil Politics and the New World Order. It has been published as well in French, German, Chinese, Russian, Czech, Korean, Turkish, Croatian, Slovenian and Arabic. In 2010 he published Gods of Money: Wall Street and the Death of the American Century, completing his trilogy on the power of oil, food and money control. Mr Engdahl is one of the more widely discussed analysts of current political and economic developments, and his provocative articles and analyses have appeared in numerous newspapers and magazines and well-known international websites. In addition to discussing oil geopolitics and energy issues, he has written on issues of agriculture, GATT, WTO, IMF, energy, politics and economics for more than 30 years, beginning the first oil shock and world grain crisis in the early 1970’s. His book, ‘Seeds of Destruction: The Hidden Agenda of Genetic Manipulation has been translated into eight languages. A new book, Full Spectrum Dominance: Totalitarian Democracy in the New World Order describes the American military power projection in terms of geopolitical strategy. He won a ‘Project Censored Award’ for Top Censored Stories for 2007-08. Mr. Engdahl has lectured in economics at the Rhein-Main University in Germany and is a Visiting Professor in Economics at Beijing University of Chemical Technology. After a degree in politics from Princeton University (USA), and graduate study in comparative economics at the University of Stockholm, he worked as an independent economist and research journalist in New York and later in Europe, covering subjects including the politics of energy policy in the USA and worldwide; GATT Uruguay Round trade talks, EU food policies, the grain trade monopoly, IMF policy, Third World debt issues, hedge funds and the Asia crisis. Engdahl contributes regularly to a number of international publications on economics and political affairs including Asia Times, FinancialSense.com, 321.gold.com, The Real News, Russia Today TV, Asia Inc., GlobalResearch.com, Japan’s Nihon Keizai Shimbun, Foresight magazine. He has been a frequent contributor to the New York Grant’sInvestor.com, European Banker and Business Banker International and Freitag and ZeitFragen in Germany, Globus in Croatia. He has been interviewed on various geopolitical topics on numerous international TV and radio programs including Al Jazeera, CCTV and Sina.com (China), CCTV (China) Korea Broadcasting System (KBS), and RT Russian TV. He is a Research Associate of Michel Chossudovsky’s well-respected Centre for Research on Globalization in Montreal, Canada and member of the editorial board of Eurasia magazine. Mr Engdahl has been a featured speaker at numerous international conferences on geopolitical, GMO, economic and energy subjects. Among them are the Ministry of Science and Technology Conference on Alternative Energy, Beijing; London Centre for Energy Policy Studies of Hon. Sheikh Zaki Yamani; Turkish-Eurasian Business Council of Istanbul, Global Investors’ Forum (GIF) Montreaux Switzerland; Bank Negara Indonesia; the Russian Institute of Strategic Studies; the Chinese Ministry of Science and Technology (MOST), Croatian Chamber of Commerce and Economics. He currently lives in Germany and, in addition to teaching and writing regularly on issues of international political economy and geopolitics, food security, economics, energy and international affairs, is active as a consulting political risk economist for major European banks and private investors. A sample of his writings is available at Oil Geopolitics.net
http://www.engdahl.oilgeopolitics.net
[email protected]
ATTENTION READERS
Due to the nature of independent content, VT cannot guarantee content validity.
We ask you to Read Our Content Policy so a clear comprehension of VT's independent non-censored media is understood and given its proper place in the world of news, opinion and media.