Since I founded Torture Renditions Ltd. on Saturday, people have been lining up outside my door asking for more business ideas. So how about…jihadi chocolate shops?

This concept is tailor-made for maximum publicity. All you have to do is hang a black jihadi flag over a chocolate shop, take a couple of hostages, and SHAZZAM! The whole world knows about you.

The black flags with white writing are perfect for dark-chocolate-based confectionary delicacies. Every time I see one of those flags I think of ultra-dark 90%-cocoa chocolate. Edible flags, anyone? I’ll bet if ISIS started manufacturing and exporting chocolate flags from Iraqi territory they could supplement their CIA drug earnings. And think of the possibilities for tourism!

And speaking of business opportunities, New York City’s 9/11 museum, that Shrine of the Monstrous Lie, just missed its big chance to grab some publicity and increase revenues.  The occasion presented itself when 9/11 criminal, traitor, and unelected non-president George W. Bush took a break from sending naked self-portraits to his sister and wandered onto the grounds. 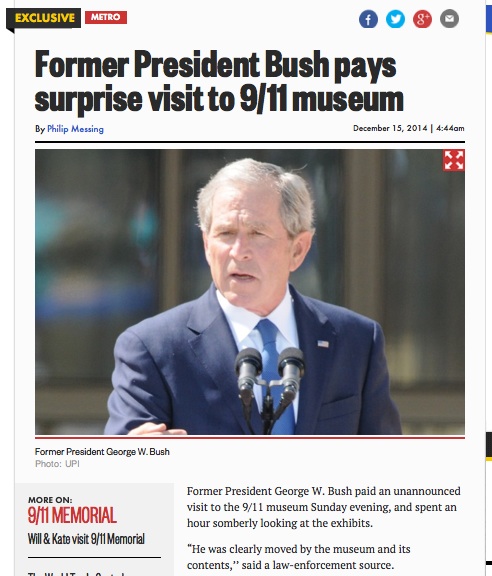 That’s like having a tyrannosaurus or wooly mammoth wander into your museum!  If I were the museum director, I would have had Bush shot, stuffed, and mounted holding a copy of “My Pet Goat.” This would not only be a fitting tribute to Bush’s complete inaction in a known location for almost an hour while the country was allegedly under surprise attack from the air…but it would also mete out a degree of justice.