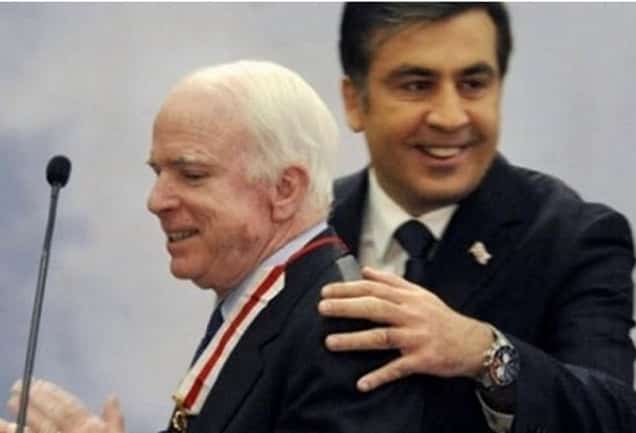 Foreword by Gordon Duff
This was received from friends in Russia.  It had been published on the FortRuss website and has not been verified.
I have no idea if any of this is true but we have more than adequate evidence that, knowing those claimed to be involved, it fits a pattern of observed behavior.
Make up your own mind. 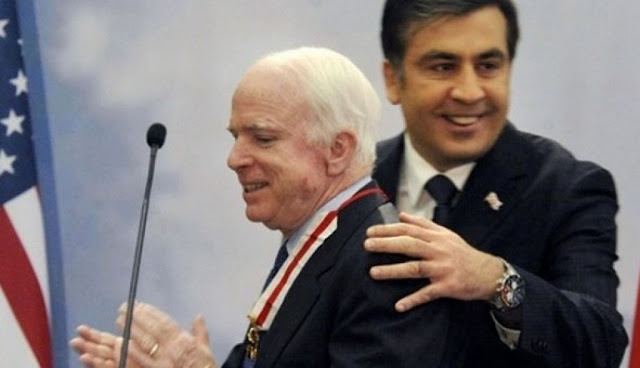 M. Sit down, David! Everything should be done on time, as we discussed. You understand the importance of everything! Wait a second, I will turn on anti-surveillance.

McCain confirmed the plan, everything is in place so you know. We got cover from the US Senate. In Syria, Russians must be hit, or else if Russians and Americans fundamentally agree, they will really dump Ukraine. Donbass is on conservation, project Transnistria is suspended. If it goes on, we are done! We should speed things up in Syria!

Have you prepared our guys?

K: Yes, everything is done. Today, they fly to Antalya and then go to Syria.

They received good training and will tear everything with their spirit. These are our Kistintsy (Georgian Chechens living in the Pankisi Gorge in Georgia), tough guys. Ramzan Machelikashvili was appointed a commander, all four obey him. They shoot from all weapons, they are anti-aircraft professionals. They are waiting for specific instructions.

M. Give Ramzan this phone number and cell phone. Upon arrival it is necessary to send a message, there is Warren’s man from the CIA, he will greet and take the guys. Turks are warned and will let them through. In short, this agent of Steve Warren knows everything and speaks Russian. After, Ramzan should give him this phone.

K. It’s all clear, but what about equipment and weapons?

M. Wait, wait! I have to pick up the call from Gerashchenko .
M. Hello Anton! Our guys are leaving today. Is it all ready?

G. Mr. Mikhail Nikolayevich! It is loud over there!

G. Now I can hear! Avakov (Minister of Internal Affairs of Ukraine) transported everything, there are five anti-aircraft [PZRK – rus.] “Willow” [Verba” – rus.] and “Needle S” [“Igla S” – rus.], full ammunition and equipment. Large anti-aircraft guns are on the road. As soon as they pass the border, your chieftain, what’s his name,  Ash-Shushani will meet them, the guys will be on the case.

M. David! All you need is already in place and when they cross the border they will get everything. There they will be greeted by Tarhan Batirashvili. You know who he is? He has great influence in the Islamic State, all Chechens pass through him, his nickname is Ash-Shushani. Also ​​Ramzan’s cousin, Ruslan Machelikashvili will also meet them. He is a ruthless thug, Americans told me.

So, the whole group will be in Latakia, in the Al-Nusra zone, the goal is to shoot down American plane. They will get flight information, there is a local Kurd there for that. The plan is turning out very cool! American plane will be shot down by Russian military. This will be told by the Prisoner, that the target was shot down from PZRK. The scene will be amusing, the whole world will talk about it.

After this group will go to Hasaka, it is a city near the Kurds and there they will destroy a Kurdish village,  the Russians will do everything. In return, the Kurds will shoot down a Russian plane with Stingers. The goal is to pit the Americans and Russians in Syria. The Turks will be grateful, they promise to rouse the Crimean Tatars.

After it is done in Syria, you will see, if Americans don’t bring troops to Ukraine and all our projects will begin operating. McCain is waiting for our actions. Otherwise, Obama will not raise his ass, elections are coming soon and he will do nothing. You see, Poroshenko also began to wag his tail in front of Putin.

C. I don’t know, Misha! It’s your plans, you know better. I’ll explain everything to the guys and will send them on the way. It’s great that Tarhan Batirashvili will meet them, he knows how to fight and will supervise everything. At one time I accepted him into the Army. His mother is Kistinka, and a Georgian father.

K. I already paid the guys, and my people will pass $20 thousand to Tbilisi.

Machelikashvili is waiting in the reception, want to have a couple words with him?!

Sveta! There’s a man with a beard who came with David, named Ramzan, let him in.

M. How are you Ramzan! How are things?

R. Batono Misha! We are ready to execute all the tasks.

M. Very good! The peace in the whole world depends on you! I and Dato will support you and your families in everything.

R. Thank you very much. David is very helpful. After completing the tasks in Syria, we will bring you back to Georgia, this is our next task. We will blow up the entire Georgia, if necessary!

M. Thank you Ramzan, this time will come, but for now we should take care of Ukraine. Dato will explain, everything is ready. Our guys will meet, Ruslan is your cousin, Aslan Margoshvili, Tarhan Batirashvili and others. You will be in good hands. Say hello to the guys and be careful. Take care of yourself.

R. You make me feel better, Misha batono. I did not know that the brother will meet, we will do everything 100%. I thought Tarhan died, I heard he was blown up along with El-Baghdadi. Insha Allah, he is alive.

M. Ramzan, take it! This is a dagger from me.

R. May Allah protect you, batono Misha! We will not disgrace ourselves and do everything, I swear to you!

K. Ok, Ramzan, wait in the waiting room, I will come out soon!

M. Ramzan is a tough man, right?! Tell me, are the Swiss accounts already available ?!

K. The court has closed my cases and the accounts are available, just need to submit documents to the bank. Adeishvili was very helpful. His guys did everything at the court. I sent them some, and will have to send more.

M. Kama still has to be paid. You said that you transferred the shares to Kakha’s people [Kaladze, Minister of Energy of Georgia] and it was closed. What is f#cken wrong with everyone to throw my money away like that!

K. Don’t yell! I told you, 35% I gave from the port and oil infrastructure. From gas I gave 10%, and added 10% for Bezhuashvili. Otherwise they didn’t agree. And in court they did everything, for Meishvili, Shavliashili and Levna Murusidze I must send fifty, I gave nothing to them yet, first just to pay the judges who were on my case. I told you everything in advance. If not, I would get a judgement like Ugulava, and would block access to the accounts.

M. F#ck their mother, b#tch! This f#cking Magis sold Kolomoisky the video. Penguin caught it and they posted the frames with Bacho f#ggots. For this reason, all the planned actions had to be stopped, against Gazprom and in defense of Rustavi 2. I said a thousand times, remove this Kardav or pay the money to this bastard. Ilham too can be offended and cut off our debt in SOCAR. It must be solved somehow. When are you going to Zurich?

K. I will send our guys, tomorrow I’ll go to Kiev and from there to Switzerland. After going to Baku, there I will tackle SOCAR issues.

M. Watch out for our Pankisi guys, so they are happy. This is the most important thing right now. As soon as we pit Moscow and Washington, then smoothly will move to Kiev. Ok, later!

M. Wait, wait. Glad I remembered! Tina asked, in Sagarejo, that her relative needs help with elections. Our guys are doing everything, and Tina will involve the military but Azersky Muganlo is crucial. Our deputy, Azik, he will contact you and when you will arrive to Baku, he will come, give him the money to bribe Muganloisk muftis. Also ask the Baku elite, to help me in this regard. There is a bitch Iniashvili, she should not win elections, California Senators support her, but I don’t care.

Do you understand what to do ?! Prior to going to Kiev meet with Adeishvili, and he will explain all the details.

K. Yes, let Zura explain everything, there are so many things, I can get lost, I need his help.

M. Good. As soon as you send the guys, let me know, I have to inform McCain, he is waiting!