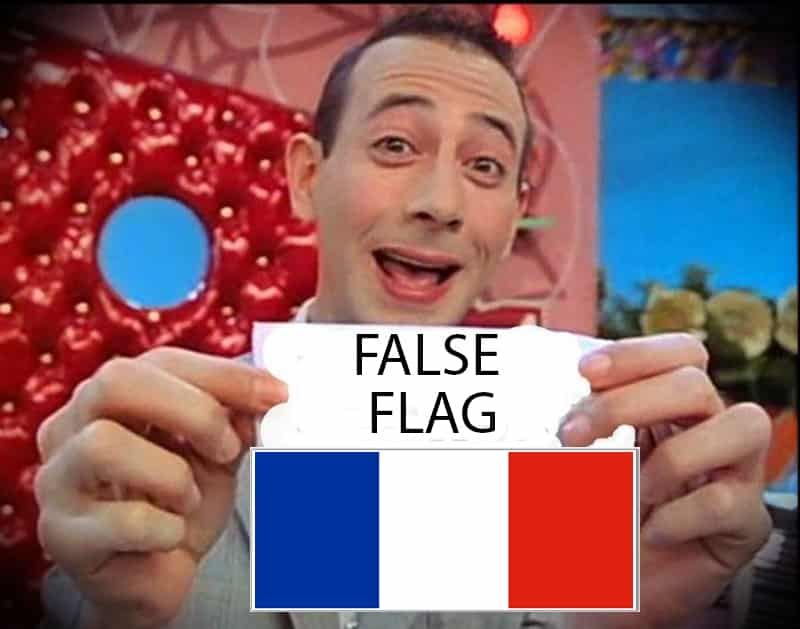 by Kevin Barrett, Veterans Today Editor  (just back from Paris)

I left Paris Friday at noon. As my plane landed in Chicago at 3:15 p.m. local time (9:15 p.m. Paris time) the media was screaming “Terrorists kill dozens in central Paris; hostages taken.” The French military was occupying the City of Lights. It looks like another Charlie Hebdo situation, only bigger and bloodier.

By an eerie coincidence – at least I hope it was a coincidence – I spent Thursday evening walking around central Paris being interviewed about January’s Charlie Hebdo false flag attacks. Little did I suspect that in less than 24 hours an even bigger terror attack would rock the city.

Filmmaker Vincent LaPierre of Egalité et Reconciliation filmed me at the Fontaine St. Michel, in front of the Notre Dame cathedral, and in various Left Bank locations as well as at E&R headquarters with leader Alain Soral. As I pontificated to the camera about false flag terror in general and Charlie Hebdo in particular, passersby looked on with interest; one customer at the outdoor café table next to us told us she loved what she was hearing and appreciated the work we were doing.

Since we now know the Charlie Hebdo attack was a Gladio 2 false flag by the usual suspects (NATO hardliners and Zionists), can we safely make the same assumption about these new Friday the 13th Paris atrocities?

I think we can.

Almost every really big, spectacular terror attack turns out, after extensive critical examination, to have been the usual state-sponsored false-flag stuff. There is no reason to think this one will be any different.

The first question, as always, is: Who gains? And the answer, as always, is: Authoritarian insiders. Zionists. Militarists. Islamophobes. New World Order-Out-Of-Chaos freaks.

Speaking of which, the order-out-of-chaos thing is going into overdrive. Between the destruction of several Middle Eastern countries, refugees flooding Europe, preparations for World War III vs. Russia and China, and ongoing false flag terror, it seems the “creative destruction” people are staying busy.

The authorities will surely use these new attacks in the same way they used Charlie Hebdo: As an excuse to shut down critical thinking and dissent. They may even try to prevent me from returning to Paris on December 11th to present a paper exposing the Charlie Hebdo false flag at a mainstream academic conference.

After all, I was already prevented once from entering Canada to give a talk on We Are NOT Charlie Hebdo: Free Thinkers Question the French 9/11. France’s president Hollande has attacked Charlie Hebdo “conspiracy theorists” in harsh terms, and his think tank, the Jean Jaurés Institute, named me as one of the world’s top five “conspiracy intellectuals” to watch out for.

If I were a truly paranoid conspiracy theorist, or conspiracy intellectual, or whatever, I would think somebody staged these new attacks just as I was leaving Paris and planning to return one month later because…well, because they’re afraid that my book We Are NOT Charlie Hebdo is picking up steam and threatening to expose the state-sponsored crimes of last January. According to this paranoid interpretation, the Charlie Hebdo high perps are “fleeing forward” into even bigger chaos and an even bigger crackdown on freedom…especially the freedom to seek the truth about false flag terror.

This new attack may throw a monkey wrench into my efforts to get We Are NOT Charlie Hebdo translated into French–which was one of my items of business in Paris.

It may also impede efforts to save Mohamed Boutiche, a witness to the fact that the Kouachi brothers, the designated Charlie Hebdo patsies, were intelligence assets. I just got word that Boutiche has been jailed and will be audited for trial on November 23rd. The authorities will undoubtedly use the new wave of terror hysteria to try to railroad Boutiche and keep a lid on his Charlie Hebdo revelations.

And let’s not forget that the EU just instituted mandatory labeling of products from the Occupied Territories; the Zionists are throwing a gargantuan hissy-fit…just like right before the Charlie Hebdo attacks. Beware of Zionists throwing hissy-fits.

So the least that can be said is that the timing seems extremely suspicious.

Then again, maybe it’s all just coincidence. Maybe this is an actual attack by angry Muslims. Maybe there is no state sponsorship. Maybe this time, for once, it actually ISN’T a false flag.

But what would “radical Muslims” gain? It’s already being blamed on ISIS; yet that makes no sense, since Russia, not France, is fighting ISIS in Syria. And ISIS, of course, is a fabricated synthetic-terror group, not a real Muslim group, anyway.

To believe the official “Muslims did it” stories of the big terror attacks starting with 9/11, you’d have to think of the ostensible Muslim perps as complete idiots, utterly incapable of strategic thinking, desperate to hand the Zionist neocons exactly the kind of PR they want.

Sure, there are undoubtedly some stupid angry Muslims out there. But they’re likely to be patsies, not orchestraters.

So although it’s too early to say for sure, I think we can tentatively assume that this Friday the 13th massacre in Paris is just the latest in a long series of false-flag spectacles. And if we let the perps get away with this one, as they’ve gotten away with all the others, we can expect more of the same.