Home World To Renee Fleming from a Flaming Fleming 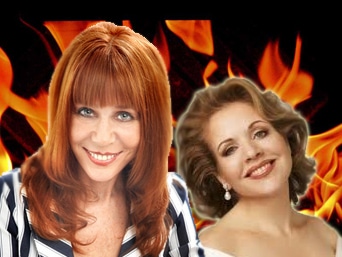 I understand you’ll be in Jerusalem on 28 July to sing a concert of ‘duets and arias’ accompanied by ‘Israel’s flagship’ the Israel Philharmonic, which is to be broadcast to 480 cinemas across America under the title ‘Live from Jerusalem’.

As a Fleming who recalls your fun spin of Verdi’s “Caro nome” on Sesame Street that encouraged children to count and as “I love to count” too, I am writing you about a few numbers, but begin with your 2009 performance at “We Are One: The Obama Inaugural Celebration”.

800,000 are children under the age of 16 years of age who are “afraid of the dark with dreams tossed and blown and have no hope in their heart” and all are denied their right to freely travel to Jerusalem.

In November 2006, Father Manuel, the parish priest at the Latin Church and school in Gaza warned the world:

“Gaza cannot sleep! The people are suffering unbelievably. They are hungry, thirsty, have no electricity or clean water. They are suffering constant bombardments and sonic booms from low flying aircraft. They need food: bread and water. Children and babies are hungry…people have no money to buy food. The price of food has doubled and tripled due to the situation. We cannot drink water from the ground here as it is salty and not hygienic. People must buy water to drink. They have no income, no opportunities to get food and water from outside and no opportunities to secure money inside of Gaza. They have no hope.

“Without electricity children are afraid. No light at night. No oil or candles…Thirsty children are crying, afraid and desperate…Many children have been violently thrown from their beds at night from the sonic booms. Many arms and legs have been broken. These planes fly low over Gaza and then reach the speed of sound. This shakes the ground and creates shock waves like an earthquake that causes people to be thrown from their bed. I, myself weigh 120 kilos and was almost thrown from my bed due to the shock wave produced by a low flying jet that made a sonic boom.

“Gaza cannot sleep…the cries of hungry children, the sullen faces of broken men and women who are just sitting in their hungry emptiness with no light, no hope, no love. These actions are War Crimes!”

I know you have a sense of humor but I am sure you- or anyone with a conscience- could not laugh at this ‘joke’ reported on 19 February 2006, by Gideon Levy who wrote for HA’ARETZ:

“The team, headed by the prime minister’s advisor Dov Weissglas and including the Israel Defense Forces chief of staff, the director of the Shin Bet and senior generals and officials, convened for a discussion with Foreign Minister Tzipi Livni on ways to respond to the Hamas election victory.

“Everyone agreed on the need to impose an economic siege on the Palestinian Authority, and Weissglas, as usual, provided the punch line:

“It’s like an appointment with a dietician. The Palestinians will get a lot thinner, but won’t die,” the advisor joked, and the participants reportedly rolled with laughter.” [1]

On 3 April 2009, the President of the United Nations Human Rights Council commissioned a fact-finding mission “to investigate all violations of international human rights law and international humanitarian law that might have been committed at any time in the context of the military operations that were conducted in Gaza during the period from 27 December 2008 and 18 January 2009, whether before, during or after.”

The Council appointed the Jewish Justice Richard Goldstone, a South African Constitutional Court judge and the former chief prosecutor of the United Nations International Criminal Tribunals for Rwanda and the former Yugoslavia.

Justice Goldstone issued the 575-page report on 29 September 2009, and the Goldstone Report accused both Israel and Hamas of war crimes perpetuated during the 22 days of assault on Gaza which began two days after Christmas 2008, when the Israeli military launched Operation Cast Lead; a full-scale attack on Gaza that killed 13 Israelis and 1,400 Palestinians.

Over 5,000 Palestinians were injured, 400,000 were left without running water, 4,000 homes were destroyed, rendering tens of thousands who are still homeless because of Israel’s targeted attacks upon them, their schools, hospitals, streets, water wells, sewage system, farms, police stations and UN buildings.

Operation Cast Lead was executed with US-supplied weapons and we the people of the US who pay taxes provide over $3 billion annually to Israel although Israel has consistently misused U.S. weapons in violation of America’s Arms Export Control and Foreign Assistance Acts.

America is the worlds largest arms supplier to Israel and under a Bush negotiated deal with Israel which Obama signed onto, we the people who pay taxes in America will provide another $30 billion in military aid to Israel over the next decade.

President Obama’s 2012 budget request ads another $3.075 billion in military aid to Israel although Israel has consistently misused U.S. Made weapons in violation of America’s Arms Export and Control and Foreign Assistance Acts.

The United States has already given more money to Israel than to any other country and the Congressional Research Service’s conservative estimate of the total cumulative US aid to Israel from 1949 through 2010 tops $109,000,000,000.

“Since the October War in 1973, Washington has provided Israel with a level of support dwarfing the amounts provided to any other state. It has been the largest annual recipient of direct U.S. economic and military assistance since 1976 and the largest total recipient since World War ll. Total direct U.S. aid to Israel amounts to well over $140 billion in 2003 dollars. Israel receives about $3 billion in direct foreign assistance each year, which is roughly one-fifth of America’s entire foreign aid budget. In per capita terms, the United States gives each Israeli a direct subsidy worth about $500 per year. This largesse is especially striking when one realizes that Israel is now a wealthy industrial state with a per capita income roughly equal to South Korea or Spain.” [2]

During the 22 days of Israeli assault on Gaza called Operation Cast Lead, “Washington provided F-16 fighter planes, Apache helicopters, tactical missiles, and a wide array of munitions, including white phosphorus and DIME. The weapons required for the Israeli assault was decided upon in June 2008, and the transfer of 1,000 bunker-buster GPS-guided Small Diameter Guided Bomb Units 39 (GBU-39) were approved by Congress in September. The GBU 39 bombs were delivered to Israel in November (prior to any claims of Hamas cease fire violation!) for use in the initial air raids on Gaza. [3]

In a 71-page report released 25 March 2009, by Human Rights Watch, Israel’s repeated firing of US-made white phosphorus shells over densely populated areas of Gaza was indiscriminate and is evidence of war crimes.

“It’s not over ’til the fat lady sings” originated from Richard Wagner’s opera suite Der Ring des Nibelungen in its last part, Götterdämmerung, when the fat lady/the Valkyrie Brünnhilde, delivers an aria that ends the drama.

The proverb cautions us to NOT assume the outcome of something until it has finished and thus, this flaming Fleming is hoping Renee Fleming’s conscience can be reached and ‘Live from Jerusalem’ will go on without her.

Most sincerely and flamingly yours,

Eileen Fleming, Citizen of CONSCIENCE for House of Representatives 2012

Founder of WeAreWideAwake.org
Staff Member of Salem-news.com, A Feature Correspondent for Arabisto.com and Columnist for Veteranstoday.com

In Solidarity YES WE CAN begin the world again.

1. As the Hamas Team Laughs

3. US Arms Used for War Crimes in Gaza