Home Government Congress Without Conscience and The Broken Safety Net: Part Two in a... 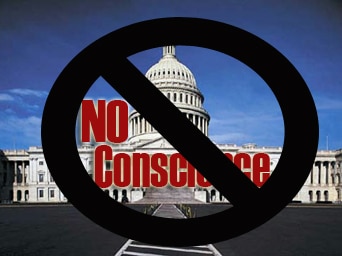 This week in D.C. thousands of Jewish and Christian AIPAC lobbyists have inundated the Capitol to push Congress to vote YES on Senate Resolution 380, introduced by Zionist Senators Lieberman, Casey and Graham, who call for a military attack on Iran.

War is the ultimate failure of intelligence and so far 44 members of Congress have co-sponsored this AIPAC bill and are listed here.

This week in Florida a Congress without a Conscience, zeroed out of the 2013 budget, $2.38 million for the homeless that Governor Rick Scott had earmarked.

If Scott signs onto the revisions, another failure of intelligence will result for Florida will also loose $77 million in 2013 Federal funding for HUD’s office of homelessness which will close down many homeless shelters.

As a resident of Florida and foremost a Christian of Conscience [meaning I take Jesus very seriously and he warned that whatever one does or does not do for the “least among us” one is doing it or not unto God] I left a voice message for Florida House Speaker Dean Cannon – 850-488-2742, and Senate President Mike Haridopolos – 850-487-5056, to express my disappointment in the legislature’s failure to fund homeless services.

In my role as a reporter I also asked, “What does the state intend to do with all the homeless people when these shelters close down? And do you have a Conscience?”

As of this writing-neither have responded.

Florida’s proposed 2013 Budget has millions for projects in leaders’ hometowns including $10 million for Senate President Mike Haridopolos, a Baptist and Republican from Merritt Island, for his Space Coast “economic development commission,” which will promote commercial research.

Dean Cannon’s website and WIKI page do not include any religious affiliation, but he is supported by Conservative Ministers of Central Florida as well as Central Florida Realtors, Builders and Contractors.

Sen. John Thrasher, R-St. Augustine noted, “The reserve issue is problematic. A lot of schools thought they were doing the right thing by saving money, but they can be hit the hardest.” [1]

Recently, Mitt Romney admitted that he was “not concerned about the very poor” but would fix America’s social safety net “if it needs repair.”

It most certainly does and Governments have obligations and people have rights!

America is a Member State of the UN UNIVERSAL DECLARATION of HUMAN RIGHTS and Article 25 affirms:

“Everyone has the right to a standard of living adequate for the health and well-being of himself and of his family, including food, clothing, housing and medical care and necessary social services, and the right to security in the event of unemployment, sickness, disability, widowhood, old age or other lack of livelihood in circumstances beyond his control.”

During America’s Great Depression, the Mormon Church launched a welfare system designed by church leaders to match multitudes of unemployed faithful with nearby farms that needed temporary labor so that goods and services could be bartered or traded.

Heber Grant, one of the church leaders in 1936, explained, “Our primary purpose was to set up insofar as it might be possible, a system under which the curse of idleness would be done away with, the evils of a dole abolished and independence, industry, thrift and self respect be once more established among our people. The aim of the Church is help the people to help themselves. Work is to be re-enthroned as the ruling principle of the lives of our Church membership.” [2]

“There was a time when the church was very powerful–in the time when the early Christians rejoiced at being deemed worthy to suffer for what they believed. In those days the church was not merely a thermometer that recorded the ideas and principles of popular opinion; it was a thermostat that transformed the mores of society. Whenever the early Christians entered a town, the people in power became disturbed and immediately sought to convict the Christians for being “disturbers of the peace” and “outside agitators.”‘

“Small in number, they were big in commitment and by their effort and example they brought an end to such ancient evils as infanticide and gladiatorial contests. Things are different now. So often the contemporary church is a weak, ineffectual voice with an uncertain sound. So often it is an arch defender of the status quo. Far from being disturbed by the presence of the church, the power structure of the average community is consoled by the church’s silent–and often even vocal–sanction of things as they are.

“If today’s church does not recapture the sacrificial spirit of the early church, it will lose its authenticity, forfeit the loyalty of millions, and be dismissed as an irrelevant social club with no meaning for the twenty-first century.”

King wondered if organized religion was too inextricably bound to the status quo to save our nation and the world. King knew that “Any nation that year after year continues to raise the Defense budget while cutting social programs to the neediest is a nation approaching spiritual death.”

The Mormon Church has members on the ground around the world to bring food and supplies to the impoverished and victims of natural disasters.

Recently the Department of Defense visited the Bishops Central Storehouse in Utah, and Gov. Romney’s church dedicated the Bishops Central Storehouse, which contains a two-year supply of food to support the Mormon Church’s welfare system in the U.S. and Canada for church members in need.   Its humanitarian program also sends food, medical supplies and other necessities to the needy of all faiths worldwide.   The facility is equipped with emergency generators, 43 tractors, 98 trailers, a one-year supply of fuel, parts and tires for the vehicles and was built to withstand earthquakes with a magnitude as high as 7.5.

When Hurricane Katrina struck, the Mormon storehouse worked with a military sense of efficiency and strategy, but most of the inventory in the central storehouse goes to supply more than 100 smaller storehouses and hundreds of soup kitchens and homeless shelters run by religious communities around North America.

Seventy percent of the items on the shelves are produced by the church itself and the remainder are purchased at steep wholesale discounts.

Most people depend on the food at the storehouse for an average of three to six months because the church’s goal is to help them return to independence and they offer employment counseling and family services.

The primary source of capital support is the Mormons’ monthly fast and church members are asked to donate what they would have spent on two meals, but many give much more.

In 1949, the United States provided Israel with its first form of U.S. foreign aid: a $100 million Export-Import Bank Loan. This loan to Israel marked the beginning of an evolutionary process that resulted in Israel becoming the largest recipient of total U.S. foreign assistance in the post-World War II era. From 1949 to 2008, the United States provided Israel with more than $103.6 billion of total foreign assistance, composed primarily of military aid—$56.0 billion—and economic aid—$30.9 billion.

All military loans to Israel were ended in 1985 under the Reagan Administration, and replaced exclusively with military grants during a period of economic crisis in Israel.

As Israel no longer needs any economic aid, Netanyahu praised the United States for giving Israel, “apart from political and military support, munificent and magnificent assistance in the economic sphere. With America’s help, Israel has grown to be a powerful, modern state. I believe that we can now say that Israel has reached childhood’s end, that it has matured enough to begin approaching a state of self-reliance.”

Homeless children have increased rates of acute and chronic health problems and are sick four times more often than children with a permanent roof over head.

Homeless children go to bed hungry at twice the rate of their peers and experience three times the rate of emotional and behavioral problems.

A homeless child is a state of emergency for people of conscience!

It has been written, “a little child shall lead them”-Isaiah 11:6

Amen on that and Amen means So Be It!

I am Eileen Fleming for US HOUSE of Representatives and I approve of this message which will be continued in Part 3 of this ongoing series.

Part One: Days of Awareness and About The Money: Part 1