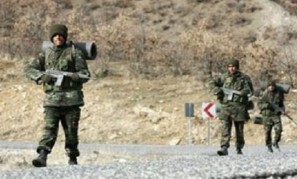 (VT Editor’s Note:  The PKK is communist group inside Turkey, made up of Kurds trained by Israel starting in 1964.    They are enemies, not only of Turkey but of the Kurdish regional government in Erbil, a semi-autonomous region of Northern Iraq.

This week, Kurdish Prime Minister Barzani, after consultation with Israeli friends, announced he would begin training Syrian Kurds to fight the Assad regime. In truth, we may well be watching something quite the opposite, attacks orchestrated to created “cover and deception” for moves against Iran.

This story, reported originally through Reuters and our affiliate, World News Tomorrow, means something totally different than Reuters would have you believe.)

Turkish Prime Minister Tayyip Erdogan accused unnamed foreign countries of backing the fighters who attacked at least three military bases.The sources said 16 other soldiers and six civilians were wounded in the overnight attacks on the bases near the town of Cukurca in Hakkari province, which borders Iraq.

“Turkey has the strength to put enemy nations and circles who hold the strings of the terrorist organization in their place,” Erdogan said in statement, without naming any countries.Clashes between the army and the Kurdistan Workers Party (PKK) have intensified in recent weeks in a conflict that has lasted 28 years and killed 40,000 people, mainly Kurds.In a separate operation, air bombardments of PKK positions in the nearby Semdinli region over the last two weeks has forced some villagers from their home, witnesses said.

Some analysts in Turkey warn of a widening conflict after Kurds in northern Syria, some of whom are aligned with the PKK, assert themselves amid a power vacuum as President Bashar al-Assad’s troops seek to suppress a rebellion. Erdogan has been one of Assad’s most outspoken critics.Millions of ethnic Kurds live in mostly adjoining areas in Turkey, Syria, Iraq and Iran.A senior member of the ruling Justice and Development Party (AKP) said the PKK was acting “in parallel” with Assad’s forces.

“The preparations and multi-pronged attack by the PKK in Hakkari exceeds the PKK’s capabilities,” said Omer Celik, AKP’s deputy chairman, according to the Star newspaper’s website.”The PKK, in carrying out the attacks in Semdinli and Hakkari, acted in parallel with the massacres carried out by Assad’s forces in Aleppo,” Celik was quoted as saying.

In the latest attack in Turkey, a large group of PKK fighters armed with guns and rocket launchers crossed over from northern Iraq, where the organization’s leaders are based, to strike the outposts, the security officials said. All of the soldiers and militia members, so-called village guards, were killed at the Gecimli base, they said. A female PKK suicide bomber blew herself up in the door of another outpost. The military has sent reinforcements and at least four attack helicopters to the area to fight the PKK and operations were continuing, they said.

In Semdinli, a 200 km (125 mile) drive from Cukurca, Turkish forces have been battling 200 PKK fighters for about two weeks, and at least two soldiers have been killed. Security sources say 50 rebels have also been killed there. Journalists and other non-residents have been barred entry to the Semdinli area.The PKK has fought for autonomy in Turkey’s mainly Kurdish southeast since 1984. Turkey, the United States and the European Union list the PKK as a terrorist organization.

Murat Karayilan, the acting PKK leader, last week said the group was changing tactics with its fight in Semdinli, according to Firat News, a website close to the militants.Instead of its traditional hit-and-run ambushes on Turkish security forces, PKK fighters would remain positioned in Semdinli in an attempt to form a stronghold there, he said.