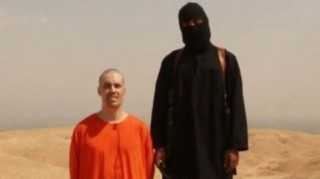 That is what a video released the other day purports to show. The American mainstream media are in a frenzy, depicting Foley’s execution as the latest extremists’ attack on America.

The New York Post headline echoed Zionist agent Pam Geller’s advertising campaign: “In any war between the civilized man and the savage, support the civilized man. Support Israel, defeat jihad.” These racist ads have been placed on buses and in train stations in major American cities. They are part of a concerted effort by Zionist propagandists to convince Americans that Muslims are dark-skinned savages who deserve to be exterminated.

So the video depicting the beheading of James Foley has taken its place as part of a Zionist propaganda campaign designed to defame Islam and keep the US fighting and killing Israel’s enemies. Was that, in fact, why it was created? In a word, yes.

The so-called Islamic State is not what it claims to be. Like the Federal Reserve, which is neither federal nor has any reserves, the Islamic State is neither Islamic nor a state. It is a terrorist group that was created by US intelligence and Zionist-allied mercenaries, trained at CIA bases in Jordan, and unleashed on the people of Syria and Iraq to destabilize those countries in service to Israel.

The realist faction of the US ruling elite, represented by President Obama and the Joint Chiefs of Staff, is genuinely alarmed by the rise of Islamic State. These realists believe the Middle East has already been sufficiently destabilized, so now it is time to move on to the real struggle against Russia, China, and the rising BRICS nations. They are concerned that Islamic State is becoming a Frankenstein’s monster that could wreak blowback on its creators.

But the ultra-Zionist faction, represented by AIPAC, JINSA, FDD (formerly PNAC) and the neoconservative dual citizens who dominate the Republican Party, loves Islamic State. For them, Islamic State is the best enemy that American taxpayers’ money can buy. It is the perfect vehicle for demonizing Islam and sealing the US-Israel relationship in American blood.

These neoconservatives follow the advice of their guru, Leo Strauss: Since only a hated foe brings people together, it is necessary to create an enemy – even a mythical one – to foster national unity. (Or, in this case, US-Israeli binational unity.)

The enemy’s nature, even his actual existence, is irrelevant. What is important to the Straussians is that blood-drenched, emotionally-evocative enemy images should saturate the mass mind.

The video purporting to show the decapitation of James Foley is a classic example of neocon hate propaganda. It is the sort of “Two Minutes Hate” event satirized in George Orwell’s book 1984, in which citizens are whipped into such a frenzy of loathing by enemy images that they sometimes physically assault their telescreen.

Though Israel regularly murders journalists, few Americans are aware of this fact, because the Zionist-dominated media does not saturate the mass mind with images of evil Israelis committing atrocities – even though Israel is the per capita atrocity capital of the world. The Orwellian “Two Minutes of Hate” propaganda treatment is reserved for Muslims…or people posing as Muslims.

Former al-Qaeda commander Nabil Na’eem agrees. He even goes one step further, arguing that al-Zawahiri is a dupe, and that al-Qaeda and its allied al-Nusra Front are also part of a Western/Zionist destabilization operation targeting the whole Islamic world. Na’eem has identified neoconservative Zionist MI-6 advisor Bernard Lewis as the intellectual godfather of the Fourth Generation Warfare plan to manufacture a bogus “Islamic terrorist threat” in order to balkanize Middle Eastern states into tiny, powerless statelets that could never threaten Israel.

Na’eem even referenced Netanyahu’s “Clean Break” plan and its successor, PNAC’s “Rebuilding America’s Defenses,” which was published on September 11th, 2000. In that document, the neoconservatives called for a “catastrophic and catalyzing event – like a new Pearl Harbor.” Exactly one year later, they got one.

Since there are now dozens of thriving professional 9/11 truth groups, led by AE911Truth.org, perhaps Nabil Na’eem should start a new one: “Former al-Qaeda Commanders for 9/11 Truth.”

Egyptian media outlet Egy-Press is reporting that Islamic State’s self-proclaimed caliph, Abu Bakr al-Baghdadi, is an Israeli Mossad agent whose real name is Shimon Eliot. According to Egy-Press, Eliot a.k.a. al-Baghdadi “has cooperated with US, British and Israeli intelligence to create an organization capable of attracting terrorist extremists around the world to one place.”

Perhaps that would explain why Islamic State (formerly called ISIL and other names) has never attacked Israel – and has even pointedly refused to verbally support HAMAS, arguing that Muslims should not resist the Zionist entity occupying the Islamic holy land of Palestine. Instead, they prefer to attack Israel’s enemies…while simultaneously demonizing Islam in the court of American and global public opinion.

That is, they are doing what al-Qaeda does, only more so. Like Boko Haram, Islamic State hardly bothers to conceal the fact that it is a false-flag group whose mission is to conduct Zionist public relations stunts.

The world’s Muslims should not just repudiate Islamic State; they should speak loudly and clearly, with one voice, emphasizing that IS is a bogus group created, trained and funded by the enemies of Islam, designed to wage Fourth Generation Warfare against Islam and Muslims.