Home Investigations False-flag attacks on women: From Malala to Isfahan

Even mainstream media admit it: Virtually everyone in Pakistan knows that the shooting/grooming of Nobel War-Is-Peace Prize winner Malala Yusafzai was a false flag op. The Zionist-dominated media  – from the liberal-Zionist ThinkProgress’s What People In Pakistan Really Think About Nobel Prize Winner Malala Yousafzai to neocon-Zionist Atlantic Magazine’s piece on “Malala conspiracy theories” – admit that Pakistanis have not been duped by “Operation Malala.”

The mainstream-dominating Zionists would also like you to ignore the fact that 97% of Pakistanis know that 9/11 was an inside job, while only 3% accept the official story. We are supposed to believe that Western propagandists know the truth about what’s going on in and around Pakistan – such as the CIA-sponsored rise of “al-Qaeda” – while the Pakistanis themselves don’t. Those Pakistanis must be a a bunch of crazy conspiracy theorists.

The simple truth is this: Every educated person in Pakistan (not counting the handful of Zionist propaganda assets and their dupes) knows that the so-called “Pakistani Taliban” is a fourth-generation warfare campaign designed to destabilize and ultimately dismember and destroy Pakistan.

[Listen to my interview with leading Pakistani defense intellectual Zaid Hamid on the Fourth Generation War on Islam.]

The “Pakistani Taliban” is a front for elements of US, Indian and Israeli intelligence agencies who want to do to Pakistan what they’ve done to Libya, Somalia and Sudan and are trying to do to Syria and Iraq.

This isn’t “conspiracy theory.” It is conspiracy fact. Consider, for example, the case of Raymond Davis, the CIA black ops specialist who was arrested in Pakistan for organizing “Pakistani Taliban” terrorist attacks.

Which one of Raymond Davis’s CIA-RAW-Mossad colleagues, engineered the shooting of Malala Yusafzai in October 2012, with the aim of turning her into another “Nurse Nayirah” – an attractive young female advertisement for the mass murder of Muslims?

Malala may have been groomed by a certain Adam B. Ellick. As Zaki Khalid wrote here at VT shortly after the Malala shooting:

“Was Adam B. Ellick deployed as (Malala’s) secret controller by the CIA? The mister’s video profiles and resume show his vast approach worldwide. He surely knows how to get a suitable slice from the cake. It was Adam B. Ellick who first brought Malala a.k.a. the BBC’s “Gul Makki” into the spotlight and featured her in his documentary for the New York Times with her real name. [Part 1] [Part 2]” 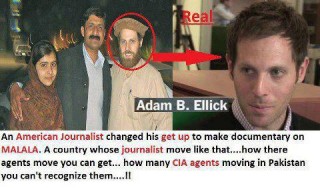 Malala was obviously part of a intelligence operation before she was shot, when she was hob-nobbing with such leading American military, diplomatic and intelligence figures as Richard Holbrooke. In 2009 – three years before the shooting – Malala was already writing for the BBC at age 11.  Yes, that would be the same BBC that reported the collapse of World Trade Center 7 twenty minutes before it happened and collaborated in sliming and then murdering key 9/11 witness Barry Jennings.  More recently the BBC  worked overtime to defraud the people of Scotland of their hard-fought independence. So as an 11 year old, Malala was already a (presumably unknowing) MI-6 asset.

Bottom line: If you study Malala’s history, and you can’t see that she was selected and groomed by an intelligence agency for a false flag op, you are dumber than a doorknob.

Just as Pakistanis know the truth about Malala and the “Pakistani Taliban,” Iranians know that the acid attacks on women in Isfahan bear the fingerprints of the same intelligence agencies behind “Operation Malala.” Even most wealthy, liberal, reformist, not-so-religious Iranians – the core of President Rohani’s support – understand this. As the US propaganda agency RFA/RL reported:

“Ali Yunusi, a senior adviser to President Hassan Rohani, told reporters in Tehran on October 27 that acid throwing does not belong in Iranian culture. He accused ‘antirevolutionary elements’ and ‘foreign agents’ of orchestrating the attacks in Isfahan, where at least four women have been doused with acid by assailants on motorcycles.”

That would be the same assailants on motorcycles who have been assassinating Iran’s nuclear physicists. They clearly have the same m.o., right down to the evasion-and-escape training in Tel Aviv that allows them do disappear so quickly on their motorbikes.

Why is the Israeli Mossad, perhaps in coordination with its (junior?) partners of CIA and MI-6, mutilating Iranian women?

At the broadest level, false flag attacks on women – from Malala to Isfahan – are attributed to “Islamic extremists” in order to discredit and impede the Islamic Awakening. Their purpose is to make Islam look bad. Like 9/11-anthrax, 7/7, Bali, Madrid, Mumbai, Boston, and other war-on-Islam false flags, Operation Malala and Operation Isfahan exemplify and disguise the moral and social bankruptcy of the West, falsely attributing the West’s own insane violence and nihlism to Islam in order to prevent the rise of an Islamic Alternative.

At a narrower level, the Mossad acid attacks in Isfahan are part of a destabilization program and propaganda campaign against the Islamic Republic of Iran. The Zionists and imperialists fear Iran more than any other country – both for its efficacious support of Hamas and Hezbollah, and its potential to serve as a regional model of revolutionary, anti-imperialist, anti-Zionist Islamic governance.

The Fourth Generation Warfare specialists are trying to split Iranian society along its fault lines. They know that perhaps a quarter of the population – represented by the North Tehran middle class – has little interest in justice or religion, and is vulnerable to Western propaganda showing the “good life” of the hedonistic Western elite. (US propaganda channels constantly beam images of smiling, rich, unveiled, irreligious, booze-swilling, dating, dancing, fashionable-looking Iranian exiles living it up in Los Angeles. Needless to say, Hollywood’s Jewish-Zionist elite is happy to help this CIA propaganda campaign; the merger of the two groups is celebrated in the war-crime film Zero Dark Thirty.)

The CIA-Hollywood-Mossad Mighty Wurlitzer duped many North Tehranis into falsely believing that the 2009 Iranian presidential elections were rigged.  A false flag “green movement” – financed by the green “American” (actually Rothschild) dollar – was invented. Rent-a-mobs were hired. Riots were engineered. The treasonous scumbags who helped destabilize their own country on behalf of foreign intelligence agencies were misportrayed as human rights heroes.

The Mossad motorbike murderers’ acid assaults on Iranian women are part of the same attempt to split Iranian society along the North-Tehranis-vs.-everybody-else fault-line. By falsely attributing the attacks to hardline defenders of the Islamic revolution, the acid-attack criminals are hoping to drive a wedge into Iranian culture. They want to split those who support maintaining strict Islamic dress codes, including the Basiji defenders of the revolution, from those who favor a degree of liberalization (a category that includes populists like former president Ahmadinejad as well as the North Tehrani nihlists.) The ultimate goal of the acid-throwing is to overthrow the Islamic Republic and install another Western puppet like the Shah.