There is no doubt that Vladimir Putin has changed the ideological war in Syria. He has single-handedly exposed the Zionist regime in the U.S., Israel, and Turkey for their “phony war on IS,” as Jim W. Dean has put it. Gordon Duff also has a point when he said that

Putin is not kidding, and NWO agents and Satan worshipers obviously know this.[1] Putin has clearly shown that NWO agents simply have no clothes. One senior American official lamented, “Putin simply wants to hurt us.”[2] Admiral Mark E. Ferguson III, Naval Forces Europe, said that Putin is trying to “cripple” NATO.[3] At the end of last month, the Christian Science Monitor reported that

“Moscow’s decision to boost its military presence in northern Syria in support of President Bashar al-Assad has posed a potential challenge to Mr. Netanyahu, who for years has had a relatively free hand to carry out strikes against arms shipments that Israel says goes from Iran, through Syria, to the Shiite militia Hezbollah in Lebanon.”[4]

Lee Smith of the Weekly Standard has lamented that “Putin is the new sheriff in town.”[5] The Syrian rebels/terrorists have conceded that “Russian strikes” are actually changing the “landscape of Syria battlefield.”[6] Putin has been so successful that NBC has reported: “Iraq may request Russian Airstrike against ISIS: Official.”[7]

Similarly, Lt. Col. Ralph Peters said that Putin is “ugly, he’s ruthless, he’s vicious, and I don’t like him at all, but he’s brilliant. He’s got a long-term strategy and his goals are clear.”[8] During the same interview, Bill O’Reilly, who is always willing to be a quintessential NWO prostitute, admitted:

“Putin is a clever guy…Charlie Rose tried. He tried…but you can’t handle Putin with questions about Ukraine and borders because Putin is way too smart for that.”[9]

Indeed. As we have shown in previous articles, Putin is historically, morally and intellectually strong because he is part of Logos. He is defeating NWO agents and Satan worshipers because they are completely irrational and diabolical. For example, Assad won the presidential election with 88.7% of the vote.[10]

Furthermore, if Syrian villagers see Russians as “saviors,”[11] then who are the real terrorists? As a side note, what about NWO agents killing and burning doctors, patients and staff in their beds at hospitals in Afghanistan and elsewhere?[12] Is that part of democracy as well?

Is a simple apology from President Obama enough to cover the crimes that NWO agents have been marshaling from time immemorial? And you see a serious politician like Putin cannot stand those people? Do you see why he has to play a little sport to get enough energy and defeat those jokers? Putin said:

“Instead of the triumph of democracy and progress, we got violence, poverty and social disaster. Nobody cares a bit about human rights, including the right to life. I cannot help asking those who have caused the situation: do you realize now what you’ve done? But I am afraid no one is going to answer that.”

Back in 2013, NWO prostitute John McCain, who has taken nice pictures with members of the Syrian terrorists in the past,[13] declared that Putin is a quasi-dictator who rules Russia “by corruption, repression, and violence.”[14]

Putin could not be any happier with McCain’s really dumb statement. He responded:

Over the past few days, NWO agents and Satan worshipers have done just that. For example, Jewish Neocon Michael Rubin has said that the U.S. needs to “bomb Iran; arm Ukraine.”[16] But that diabolical plan came to an abrupt end when Putin started to walk on the political podium.

NWO agents and Satan worshipers have also been able to roar in the controlled media and have done their best to demonize Putin, Russia, Assad, and Iran. Pick up some of their newspapers and magazines and read the headlines. One of their recent strategies is to perpetuate the lie that “More than 90% of Russian airstrikes haven’t targeted ISIS: U.S.”[17] This is actually propaganda. And Putin knows that as well. 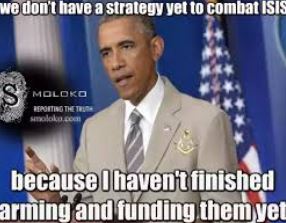 Putin also has powerful weapons such as Su-24 Fencer to blow terrorist heads sky high.[18] For example, within a few hours of attack, “Russian jets hit 12 ISIS targets in Syria, ’cause panic among extremists.’”[19] Russia has nailed ISIS so bad that “60 sorties” have abandoned their post within seventy-two hours. Just recently, the Associated Press itself acknowledged:

How do NWO agents and Satan worshipers respond? US Defence Secretary Ashton Carter has said that “the Russians will begin to suffer from casualties.” In the same vein, Zbigniew Brzezinski declared:

“The United States should threaten to retaliate if Russia does not stop attacking U.S. assets in Syria, former national security adviser Zbigniew Brzezinski wrote in a Financial Times op-ed published Sunday, urging ‘strategic boldness,’ with American credibility in the Middle East and the region itself at stake.”[20]

Of course, Brzezinski is not that stupid. What he means by non-ISIL targets here are the Syrian rebels/terrorists, who have repeatedly signed deals with members of ISIL.[22] So, as Kevin Barrett has recently pointed out, Brzezinski has indirectly admitted that the U.S. government has been using al-Qaeda or the Islamic State “as assets.” Barrett said:

“This is not something that is normally admitted by officials from Washington, DC, that is that al-Qaeda in Syria, the al-Nusra Front, is actually a US ally.”

So, the plot thickens. The so-called “war on terror” is a smokescreen designed to keep America and much of the West under Israel’s rules. Even C.I.A. director John Brennan, of all people, has implicitly declared that our foreign policy has spurred terrorism.[23] As Paul Craig Roberts put it last year,

“As in Libya, the Obama regime set jihadists lose on Syria, pretending that they were fighting for democracy against a dictator. But Washington lost control over its monster which has gobbled up large parts of Syria and Iraq and is forming them into a new country hostile both to the West and to the Muslim vassals of the West…

“The government of Washington’s ally, Israel, has also endorsed Leninism and is using the same principle of boundless coercion against the Palestinians. Of all the governments in the world, only Washington and Zionist Israel have declared themselves to be unaccountable and above law. They are models not of democracy but of tyranny.”

Thank God that there is a change. Thank God that Putin is putting the fear of God in the New World Order. If “the dialectic always labors in the service of Logos, which is to say, in the service of God’s providence,”[24] as E. Michael Jones has recently argued, then one can say that Putin is bringing Logos in Syria by challenging NWO agents and Satan worshipers to get in the ring.