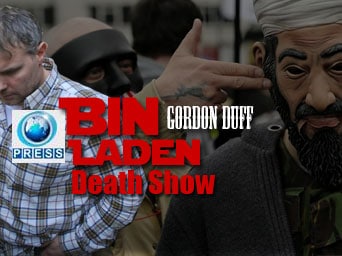 The US operation that allegedly killed Osama bin Laden in Pakistan has actually led to the death of a clone of the al-Qaeda leader, working under CIA operative Raymond Davis, an American editor says.

Gordon Duff, Senior Editor of Ohio-based Veterans Today, says what the United States claims to be Osama bin Laden was actually a “clone” operating under the supervision of CIA operative Raymond Davis in the Pakistani garrison town of Abbottabad.

“The CIA maintained a safe house at Abbottabad [where it] kept agents right next to the compound that ‘bin Laden’ was allegedly at,” Duff said in a phone interview with Press TV’s U.S. Desk on Tuesday.

“They watched bin Laden from their safe house but bin Laden, or whoever they say he was, had no security of any kind, there were no guns, no weapons, nothing,” he continued “All they had there was a CIA facility next door filled with armed people… the house next door was either a door watching a horribly unarmed and helpless Osama bin Laden or they were the security officers protecting the compound with a phony bin Laden,” he said.

Duff further added that the real bin Laden died years go after having spent years in American hospitals receiving treatments for various ailments. He also dismissed as false the claims that bin Laden was responsible for the 9/11 terrorist attacks. “The Federal Bureau of Investigation (FBI), the U.S. department of justice has never been able to come up with a single shred of evidence that Osama bin Laden had any involvement in 9/11,” he noted. “

Osama bin Laden had been dead for a decade. Confirmations received from the highest sources in the U.S. intelligence community confirm that Osama bin Laden’s body was recovered by Special Forces operating in Afghanistan in December 2001,”

Duff has written in his article entitled ‘Was Raymond Davis CIA’s Bin Laden Handler?’ published on veteranstoday.com May 9. “His body was frozen and kept in storage for a date when it would be of advantage to the United States to use it for maximum advantage,” he wrote. HJ/SM/MM

“The real bin Laden died years ago after receiving treatment in American hospitals for his various illnesses,” said Gordon Duff, senior editor of Ohio-based Veterans Today, in an interview with Press TV’s US Desk.

“His [bin Laden] body was frozen and kept in storage for a date when it would be of advantage to the United States to use it for maximum advantage,” Duff wrote in a May 9 article titled ‘Was Raymond Davis CIA’s Bin Laden Handler?’ 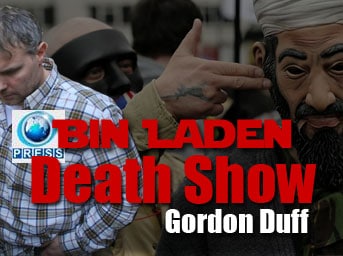 According to the US intelligence community, bin Laden’s body was recovered in 2001 by American Special Forces in Afghanistan, Duff says.

“The CIA maintained a safe house at Abbottabad [where it] kept agents right next to the compound that ‘bin Laden’ was allegedly [killed] at,” Duff said.

Duff went on to say that the CIA facility next door to the alleged bin Laden’s compound was filled with armed agents possibly protecting the phony bin Laden.

Duff also emphasized on the fact that the Federal Bureau of Investigation (FBI) has failed to present any evidence linking bin Laden to the September 11 terrorist attacks on the US soil about ten year ago.

Analysts have raised serious questions as to why US officials did not allow for the application of a DNA test to formally confirm the identity of the corpse before his burial at sea.