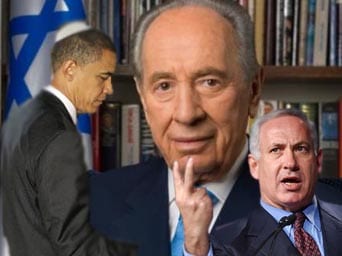 This Monday’s talks between President Obama and Prime Minister Netanyahu maybe the most consequential encounter yet between the U.S. and Israel and the focus is all on Iran.

Just prior to AIPAC’s Conference, ‘Occupied’ Congress overwhelmingly passed H.R.347, the Federal Restricted Buildings and Grounds Improvement Act which will make it a felony to express one’s conscience and exercise one’s freedom of speech via demonstrations near to presidential candidates or visiting heads of state.

If Obama signs onto it, US citizens of conscience could be imprisoned for up to one year if they dare enter or remain in a building or on the grounds where the Secret Service is present or where ever there is an “an event designated as a special event of national significance” such as the AIPAC Conference, the Democratic and Republican National Conventions as well as the Super Bowl.

Alfred Nobel’s intention was to reward people with a moral backbone and he hoped to create icons and examples to humankind.

In his congratulatory message to President Obama upon being awarded the 2009 Nobel Peace Prize, Israeli President Shimon Peres opined:

“Very few leaders if at all were able to change the mood of the entire world in such a short while with such profound impact. You provided all of humanity with fresh hope, with intellectual determination, and a feeling that there is a Lord in heaven and believers on earth. Under your leadership, peace became a real and original agenda. And from Jerusalem, I am sure all the bells of engagement and understanding will ring again. You gave us a license to dream and act in a noble direction.” [1]

And the Nobel committee “stressed that it made its decision based on Mr. Obama’s actual efforts toward nuclear disarmament as well as American engagement with the world relying more on diplomacy and dialogue.” [2]

In an interview with Atlantic magazine published last week, Obama warned, “As president of the United States, I don’t bluff. I think both the Iranian and the Israeli governments recognize that when the United States says it is unacceptable for Iran to have a nuclear weapon, we mean what we say…All options are on the table [which] includes a military component.”

On 11 August 2011, during a GOP debate, Ron Paul warned, “Countries you put sanctions on, you are more likely to fight them. Sanctions are not diplomacy. They are a precursor to war.”

President Obama is the third sitting American president to win the Nobel Peace Prize and his peers include Mikhail S. Gorbachev, who won the Nobel for helping end the Cold War which raged from 1945 to 1991, and Nelson Mandela, who fought for the end of Apartheid in South Africa.

The apartheid regime in South Africa existed from 1948 until 1994; but it was not until the late 1980’s that the American government got on-board with the twenty-plus years of a global call for boycott, divestment and sanctions that ended that apartheid regime.

On October 2, 2009, The Washington Times reported that Obama agreed to keep Israel’s nukes secret and reaffirmed the 4-decade-old secret understanding that has allowed Israel to keep a nuclear arsenal without opening it to international inspections.
But on April 5, 2009, President Obama stood on the world stage in Prague and admitted, “As the only nuclear power to have used a nuclear weapon, the United States has a moral responsibility to act…When we fail to pursue peace, then it stays forever beyond our grasp. We know the path when we choose fear over hope. To denounce or shrug off a call for cooperation is an easy but also cowardly thing to do. That’s how wars begin. That’s where human progress ends…the voices of peace and progress must be raised together…Human destiny will be what we make of it…Words must mean something.”

So should the Nobel Peace Prize and among the 231 nominations for this year’s Nobel are two champions for freedom of conscience and thorns in the sides of America and Israel.

“Manning is a soldier in the United States army who stands accused of releasing hundreds of thousands of documents to the whistleblower website WikiLeaks. The leaked documents pointed to a long history of corruption, war crimes, and imperialism by the United States government in international dealings. These revelations have fueled democratic uprising around the world, including a democratic revolution in Tunisia. According to journalists, his alleged actions helped motivate the democratic Arab Spring movements, shed light on secret corporate influence on our foreign policies, and most recently contributed to the Obama Administration agreeing to withdraw all U.S. troops from the occupation in Iraq.

“Bradley Manning has been incarcerated for well over a year by the U.S. government without a trial. He spent over ten months of that time period in solitary confinement, conditions which experts worldwide have criticized as torturous.

“The documents made public by WikiLeaks should never have been kept from public scrutiny. The revelations – including video documentation of an incident in which American soldiers gunned down Reuters journalists in Iraq – have helped to fuel a worldwide discussion about America’s overseas engagements, civilian casualties of war, imperialistic manipulations, and rules of engagement. Citizens worldwide owe a great debt to the WikiLeaks whistleblower for shedding light on these issues.” [1]

Mordechai Vanunu, the Israeli nuclear technician who revealed the details of Israel’s nuclear program and exposed the “secret cooperation between Israel and western countries” because he wanted to prevent a nuclear holocaust, has been nominated for the Nobel Peace Prize over twenty times.

In 1986, Vanunu was kidnapped by Mossad agents and in a close-door trial was sentenced to 18 years in prison and since his release in 2004, he has been arrested several times for violating the draconian restrictions placed upon him, including speaking to foreigners who happen to be journalists.

In 2007, after Bishop Tutu nominated Vanunu for that year’s Nobel, Vanunu told me he didn’t want the Peace Prize if Israel would not allow him the freedom to go and accept it.

When he was nominated in 2009, Vanunu wrote the Nobel Committee:

“I am asking the committee to remove my name from the nominations. I cannot be part of a list of laureates that includes Simon Peres. Peres established and developed the atomic weapon program in Dimona in Israel. Peres was the man who ordered [my] kidnapping and he continues to oppose my freedom and release. WHAT I WANT IS FREEDOM AND ONLY FREEDOM I NEED NOW.”

In 1963, when Vanunu was nine years old the Zionists came to his home town of Marrakech, Morocco and convinced his Orthodox father to abandon his general store and pack up the first seven of his eleven children for the land of milk and honey. Instead, the Vanunu’s were banished to the ethnically cleansed Palestinian village of Beersheba.

Peres replied, “I can tell you most clearly that we will not introduce nuclear weapons to the region, and certainly we will not be the first.”
As of this writing Vanunu remains silent about his 2012 nomination but the ‘smart money’ is betting if he does issue a statement he will publish it at his YouTube Channel: vanunuvmjc before talking to The Media; because as Vanunu told me in 2007 after he refused to grant Amy Goodman a follow-up interview to her 2004 interview which was used as major testimony against him in his Freedom of Speech Trial, “The Media never helped me.”

20th century Christian Anarchist, Author, Reporter and Founder of The Catholic Worker, Dorothy Day advised, “Spend your life working on something that outlasts it”.

This 21st century struggling Christian Anarchist, Author, Reporter, Founder of WeAreWideAwake and Candidate of Conscience for US House of Representatives is willing and committed to spend the rest of my life working to End the Occupation of Palestine and US and Israeli Nuclear Deceptions

Because as George Washington warned in his Farewell Address: “Observe good faith and justice towards all nations; cultivate peace and harmony with all…and passionate attachments for others, should be excluded; and that, in place of them, just and amicable feelings towards all should be cultivated. The nation which indulges towards another a habitual hatred or a habitual fondness is in some degree a slave. A passionate attachment of one nation for another produces a variety of evils.”

I am Eileen Fleming and I approve of this message.