Home Investigations Jeffrey Goldberg Confesses: The real “Terror Threat” is From Neocons Like Him 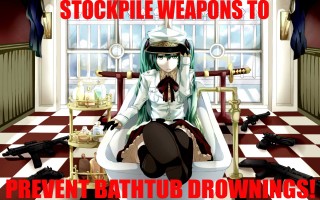 My 2009 book Questioning the War on Terror began by pointing out that terrorism is less of a threat to Americans than bathtub drownings and lightning strikes.

Since then, the “terror-bathtub” meme has gone viral. I push it every chance I get, and I’m hearing more and more echoes.

Someone at Mossad’s psychological warfare division has apparently decided that the “terrorism is less dangerous than bathtubs” thing has become an actionable threat. So they assigned Jeffrey Goldberg, former guard at an Israeli political prison, to bash me with a bathtub.

Goldberg’s new article Terrorism vs. bathtubs: the false analogy on danger doesn’t give me  credit for pushing the meme…but I’ll take it anyway.

Goldberg proves to be as good at torturing logic and evidence as he was at torturing imprisoned Palestinian activists. By twisting, omitting, or lying about facts, and engaging in leaps of logic, he makes a non-argument whose empty core seethes with rabid Islamophobic bigotry. In the end, he makes a confession in Straussian doublespeak: His surface argument appears to support the idea that terrorism is a threat; but a close reading shows that he knows the “threat” is a hoax, perpetrated by people like himself in order to trick the US into fighting Israel’s enemies.

To the extent that he addresses the argument, he concedes it in advance. Yes, Goldberg admits, it’s true: “The annual risk of drowning in a bathtub is one in 800,000, while the annual risk of being killed by a terrorist is one in 20 million.” In other words, you are about 25 times more likely to drown in your bathtub than to be killed by a terrorist.

So why have we shredded the Constitution, launched criminal wars of aggression that have killed millions and ruined the lives of tens of millions, destroyed our economy, and turned the USA into a permanently-militarized banana republic? Because, Goldberg informs us, Muslims are much, much worse than bathttubs. Unlike bathtubs, those nasty Muslims are conspiring to kill more of us than the pitifully insignificant number they have killed so far.

If they somehow managed to double the number of people they kill, terrorism might become…GASP…one-twelfth of the threat posed by bathtubs. If they raised the number they kill by a factor of ten, they might become half as dangerous as bathtubs. Oh my God! The horror!

In reality, extremist Muslims commit only about 6% of the terrorist attacks in the USA. Extremist Jews commit 7%. (Source: FBI statistics.) But for some odd reason, Goldberg focuses only terrorism attributed to Muslims. He claims that “individuals in the Islamist orbit” are seeking to become as dangerous as bathtubs.

Goldberg lies outrageously as he seeks to paint Muslims, I mean “individuals in the Islamist orbit,” as a danger comparable to, or perhaps even greater than, the danger of bathtubs. Goldberg: “As early as 1998, Osama bin Laden asserted that Islam required him to use weapons of mass destruction in the conduct of his jihad, and he made the acquisition of these weapons a high priority.”

In fact, no source on earth claims that Bin Laden, or anyone else, has ever “asserted that Islam required him to use weapons of mass destruction.” Goldberg’s claim is a blood libel.

In fact, the worst thing Bin Laden or any “al-Qaeda” types have ever said boils down to: “If you kill X numbers of us, we have the right to kill X numbers of you to retaliate and dissuade you from further mass killings.” Every nation on earth, every military, professes the same doctrine…except Israel, which says “we have the right to kill TEN of you in our war of aggression, for every one of us you kill in self-defense.”

According to reports of alleged Bin Laden interviews by ABC News and Time Magazine in 1998, Bin Laden stated that ACQUIRING (not using) nuclear weapons to defend the world’s Muslims (not to launch any kind of aggression against anyone) is a religious duty. Since the rulers of the US and many other nations apparently believe that acquiring nuclear weapons to defend their people is a patriotic duty, it is unclear how Bin Laden’s position is different from theirs.

But what was Bin Laden doing being interviewed by ABC News and Time Magazine, anyway, if he was the world’s most dangerous terrorist? Obviously there was some kind of information warfare operation going on. Some think Bin Laden was a US-Saudi-Israeli operative all along; others suggest that he and his organization were infiltrated and manipulated. For example: All sources agree that Ali Mohamed, who orchestrated the attacks on the US embassies in Kenya and Tanzania in 1998, was a US intelligence agent who infiltrated al-Qaeda. In all likelihood, Ali Mohamed perpetrated those bombings as part of a US-Israeli intelligence operation designed to set Bin Laden up as a patsy for the coming 9/11 world-historical event. Bin Laden, who was a bit gullible but not stupid, realized he had been set up, and spent the fall of 2001 denying any connection to 9/11 and instead blamed the event on American Jewish radicals…but for some reason, the US media refused to report those statements to the American people…then also failed to report Bin Laden’s death in 2001, the evidence that all post-2001 “Bin Laden” statements have been hoaxes, and many other things.

Goldberg’s attempt to manufacture an Islamic threat grasps at straws: “I don’t think it’s probable that Islamists will one day be able to launch a nonconventional attack on an American target. But I think it’s plausible, and now that mass stockpiles of chemical weapons may be in flux in a highly unstable Syria, the likelihood that these weapons will fall into the hands of al- Qaeda-influenced organizations is going up, at least slightly.” That’s right, Jeff: Since the US-Israel axis and its regional puppets are giving their al-Qaeda mercenaries chemical weapons to set up a false-flag event to blame on Assad, I suppose it’s at least “plausible though not probable” that we might suffer some blowback.

After blowing smoke designed to obscure his admission that the alleged threat from terrorism is indeed vanishingly small, Goldberg claims that the real problem is not the actual terrorism (yes, he admits, bathtubs are worse) but the resulting Orwellian reaction: “…security procedures…that are onerous and debilitating.”

I’m with you on that one, Jeff.

There is no meaningful threat from terrorism, except the Orwellian security measures that neocons like you are forcing down our throats.

To eliminate the threat from terrorism, all we have to do is eliminate the Orwellian security measures – and the whole National Security State.

So to end the only real threat from terrorism, let’s repeal the Patriot Act.

To end the only real threat from terrorism, let’s repeal the NDAA.

To end the only real threat from terrorism, let’s abolish the Department of Homeland Security.

To end the only real threat from terrorism, let’s abolish the CIA, NSA, and other spy agencies.

To end the only real threat from terrorism, let’s slash the military budget by 95%, close our more than 900 military bases around the world, bring all the troops home, defend our borders, and mind our own business. (Then no terrorists, whether from Islamic or Jewish orbits, would have any motive to attack us.)

And finally: To end the only real threat from terrorism, let’s prosecute the real 9/11 criminals – and the rest of the Israeli agents, including Jeff Goldberg, who have hijacked America.