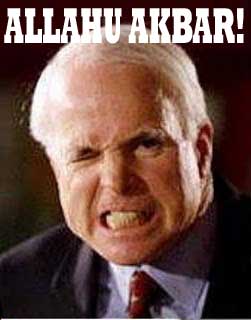 When I saw the headline “McCain explodes at Syrian Christians” my first thought was: This must be the first time a sitting United States Senator has conducted a suicide bombing.

Then I read the article. It turns out the explosion was metaphorical.McCain had a tantrum because he didn’t like the Syrian Christians’ message: “Please, America, stop arming the takfiris who are killing us!”

I guess that’s better than blowing the room to kingdom come. Though I wouldn’t put that past him either.

Last May I scooped the world with the news:  “McCain Sneaks Across Syria Border, Joins Al-Qaeda.” But now it gets worse: McCain is shilling for ISIS, the group that got expelled from al-Qaeda for being too extremist in its approach to terrorism.

That’s right: US Senator John McCain is lobbying for a terrorist group that thinks al-Qaeda is a bunch of pacifist wimps. And he is “exploding” against Syrian Christians sick of watching their people getting massacred by takfiri lunatics.

That makes McCain a more extremist “Islamic terrorist” than al-Qaeda chieftain Ayman al-Zawahiri, who is actually telling his people to “stop attacking Christians!”  Compared to McCain, Zawahiri is a veritable Mother Theresa.

McCain is assuming an interesting position in al-Qaeda history.

I await the announcement that John McCain, that bundle of barely-bottled-up rage, has been appointed Emir of ISIS and delegated with personal head-chopping responsibilities. If the Syrian Christian delegation ever gets into the same room with him after that, “heads will roll!”

In some ways, the Zionist-owned-and-operated McCain is the perfect takfiri.

Takfiris take Bush’s slogan “you’re either with us or against us” to a preposterous extreme. Do it their way, or you’re an evil heretic destined for the chopping block.

Zionists, like takfiris, think anyone who disagrees with them is some kind of lower life form. In fact, Zionists and takfiris are alike in a great many ways. They should probably start their own country – call it ZioTakfiristan – and leave the rest of us alone.

John McCain would be a good choice to serve as its executioner-cum-head-of-state.