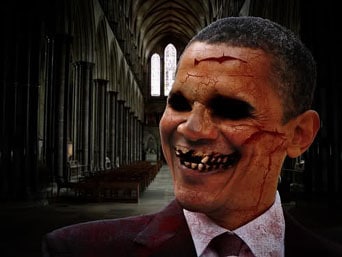 In light of the current and well-founded anxiety that the Obama administration will conduct a false flag operation during the May 20-21 Chicago NATO summit, this article, although written in 2008, is crucial reading now.

Major William B. Fox and Dr. James H. Fetzer were my coauthors.

More and more Americans are worried that Barack Obama’s promises for change are not only pure fantasy, but worse yet, that he may be even more dangerous than Bush. He is certainly smarter and more sophisticated, and there are some troubling signs that he might serve the same corrupt power elite.

Some of the greatest contributors to Obama’s campaign were the same Wall Street banksters who in October effectively staged a fiscal coup d’etat by demanding and receiving a “write your own check” $700 billion bailout from the U.S. taxpayer. Then-candidate Obama joined rival McCain in backing the scam.

“Obama promised change… but how does change arise when the most arrogant woman on earth is appointed Secretary of State and the rest of the new government is staffed with tried-and-true Likudniks and servants of the military-security complex?”

In his article A Loud Silence Justin Raimondo argued that Obama intends to break his promise to end the war in Iraq.

Thanksgiving Day’s Mumbai mayhem was an all-too-convenient distraction from bad news out of Iraq, where parliament imposed a harsh status of forces agreement on the same day as the India attacks; and out of Afghanistan where U.S. puppet president Hamid Karzai issued a first-ever request Friday for a U.S. withdrawal date. The pro-war mainstream media blared “Mumbai Massacre!” incessantly over the holiday weekend, neatly omitting the devilish details of our quicksand wars in the Middle East.

The details of Mumbai are still very sketchy and have changed consistently since the event. While it is still too early to state with absolute conviction that the India attacks were a state-sponsored false flag affair, there is a strong circumstantial case in favor of that surmise. After all, the attacks occurred within 24 hours of an FBI alert to New York City, amplified in Los Angeles. They had the effect of painting “patsy” Pakistan into a corner, surrounded by now-hostile India in the east and NATO/U.S.-occupied Afghanistan in the west. Finally, they were the perfect set-up for Obama to introduce his hawkish national security team, whose focus will be Afghanistan.

Added to the slew of “coincidences” was a chilling report. According to a bipartisan Congressional committee headed by Senator Bob Graham, which released its findings while Obama’s war team was doing its Dec 3 press conference, the U.S. will likely be hit by a nuclear or biological attack during the Obama presidency and that the attack will likely come from Pakistan.

Since Thanksgiving the stage has been set for an Obama escalation of the Global War and the Homeland State. In light of all this, we are concerned that the election has changed nothing, and that Obama will be a “Black Bush.” American patriots must not let their guard down. Eternal vigilance remains the price of liberty.